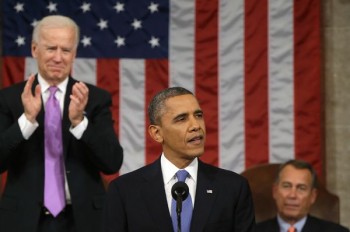 With the U.S. military experience in Iraq finally concluded, in January of 2012, President Barack Obama bookended his State of the Union address with an appeal for the nation to act more like the United States military: goal driven and united. Just seven sentences in, he explained:

At a time when too many of our institutions have let us down, they exceed all expectations.  They’re not consumed with personal ambition.  They don’t obsess over their differences.  They focus on the mission at hand.  They work together. Imagine what we could accomplish if we followed their example.

The generously sunny characterization of military inter-service relations and civil-military relations aside, President Obama’s simple elevation of martial virtues and military service — in a democratic republic to which both are supposedly subordinate — was disquieting.

After two more years of intractable gridlock in Washington, the quiet continuance of the longest war in American history, and a presidency dodging overblown scandal after overblown scandal, President Obama once again returned to the lectern to deliver his State of the Union message – and afterwards, disquiet seemed an inadequate descriptor.  During what was widely anointed the crescendo of a speech otherwise remarkable only for highlighting the vice president’s propensity to touch his own skin, we were once again enjoined by the Commander in Chief, in ritualistic fashion, to acknowledge and draw encouragement from the lone American institution that still commands its citizen’s respect and admiration: it’s fighting arm.

When the muscular appendage of the United States government becomes the only place where inspiration can be mined, we ought admit our civil body politic diseased. For all the chatter about returning to Constitutional principles and realigning our nation with its founders’ values, in a rare demonstration of political unity, we have strayed remarkably off course on the critical matter of the relationship between the nation’s armed forces and its citizens. We have lost the heavy and healthy skepticism of military power and professional standing armies that the founding generation was steeped in. While U.S. Army Ranger Sgt. First Class Cory Remsburg is a bona fide hero (ten deployments goes far beyond anything that could be honestly described as “service”), the heavily remarked upon “shout out” he received, and its rapturous, nearly cathartic response is representative not simply of gratitude, but of an extolling of military virtues, and a broad-based, effusive exaltation of soldiers themselves more adequately described as militarism.

Historically, members of the military have not always been used as political props in the promotion of (ever-vanishing) national unity and purpose. But, incontrovertibly, since American society widely consented to abandon the collective obligation of national defense in the creation of the All-Volunteer Force in Vietnam’s wake, for whatever reason, the tendency is now entirely ubiquitous.

Congressmen and women, as well as a hearty percentage of U.S. citizens, used to be able to look at each other in understanding glances when moments to reflect on the sacrifices made to country presented themselves. As Dartmouth President, and recent military scholar James Wright writes in Those Who Have Borne the Battle, “[a]s recently as 1990, more than half of the members of Congress were veterans.” However, “[t]he number and percentage of veterans serving in Congress is lower now that it has been in seventy years – about one-fifth of 2011-2013 Congress are veterans.”  Indeed, with “service” now pawned off to a paltry few, farmed from ever shrinking geographic and socio-economic pools, the eyes, instead, raise themselves upwards in obligatory fealty to the gallery – to this year’s carefully selected wounded symbol of American sacrifice; a lone reminder that “we” are not entirely without selflessness; not entirely, slavishly devoted to a definition of freedom synonymous with individual autonomy, personal fulfillment and gain.

Moral bankruptcy, however, is not the only reason to oppose such an arrangement.

In terms of praise showered upon them, and most significantly in the insularity of their existence, the military have become the new rockstars; the new celebrity. Yet the crucial distinction between these two iconic American groups is that the populace, overwhelmingly, only want admittance to one of them.

In the absence of sacrifice, Americans willingly supply an overabundance of plastic patriotism — of cheap, utterly convenient, symbolic gestures that have the cumulative effect of bestowing a near demigod status upon the men and women of the U.S. armed forces. Coupled with historically unprecedented, prolonged exposure to the extreme conditions of war, this transformation into the human embodiment of American virtue and selflessness effectively cordons them off from our society. In doing so, we help create a literal American military class, dangerously, and unfairly set apart from the country it ought feel most attached to. (As one recent example of this divide, most Americans could not have cared less about the retaking of Fallujah by al-Qaeda insurgents and their Iraqi Sunni allies this past month, though for the Marines who endured the intense, close combat battles of the 2004 campaign there, nothing could be further from the truth.)

The emergence of this divide has real consequences which may impinge upon the ability of elected officials to rightfully oversee our wars and shape policy. Former Secretary of Defense, Bob Gates, weighed in on the issue in a 2010 lecture at Duke University, highlighting a study in 1988, showing that “about 40 percent of 18 year olds had a veteran parent,” and that “by 2000 the share had dropped to 18 percent, and is projected to fall below 10 percent in the future.” While Gates steered clear of the study’s implications, James Wright does not. Candidly, he warns:

Non-Veterans are more likely to assent to the recommendations from the Pentagon and from Veterans Affairs – letting the military guide its own future…Veterans have traditionally been more comfortable asking hard questions about military and veteran matters…Non-Veterans are a bit intimidated about all of this – and surely do not want to be vulnerable to a charge of not supporting the troops.

We run the risk, in other words, of becoming a society too deferential to the whims and institutional interests of a military class whose interest do not always necessarily align with the well being of the American people. But perhaps worse, is the fear that military elites will begin to internalize the messages we insist on sending: that they are better, and more virtuous than us. For it’s simply a small step to then conclude that they are therefore more entitled to, and more capable of creating effective military policy than their constitutionally mandated civilian overseers. These dangers become much less theoretical when considered alongside Gen. Stanley McChrystal and his staff’s blatant distain for civilian elites, and the broader challenge they mounted in 2009 to their oversight of the military. The leaked Army report advocating McChrystal’s position on troop figures, and numerous public comments markedly at odds with civilian policy makers had the collective effect of boxing in the Commander in Chief as he sought to re-shape policy for the war in Afghanistan.

Military institutions cannot simply be assumed to be benign servants of the state. Yet the cheap political theatre that President Obama revisited in his State of the Union, and America’s varied, vacuous forms of patriotism – helping produce the dangerous gulf between the few of whom we ask so much, and the many of whom we ask so little – assumes just that. It is, consequently, our obligation to remember and honor both parts of the axiom James Madison laid out in Federalist No.41, that “A standing force therefore is a dangerous, at the same time that it may be a necessary provision.”