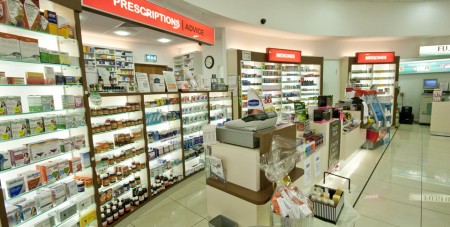 With pollen blanketing my car, I stopped by a “local” pharmacy on the way to work this morning. It’s an impressive new building, with a substantial parking lot, gleaming façade, and amenities scattered throughout the aisles. Certainly it was not the pharmacy of my small-town childhood with its array of various embarrassing products hung without decorum from cracked pegboard, sometimes without listed prices so as to necessitate a rather sheepish request to the cashier about the cost of this ointment or that apparatus. One did not dally in that place, but since it was such a small town the clerks often did feel entitled to engage in small talk, within ear-shot of the local beauties, on how that pimple medicine really did seem to be helping at last—“for your shoulders too?”

In comparison, the store I visited today was built for comfort, exuding all the beige-ish pressed wood and faux-slate tiled affability of Bobo-dom –think Starbuck’s or Whole Foods. This pharmacy didn’t sell antacids and dandruff shampoo, it sold itself as a “third place,” somewhere you might want to be for a while. It didn’t sell de-louser, but a mood.

Like so many American stores, it was huge—enormous. And like most American drug stores, it sold so much more than pharmakos, but also a whole range of foods guaranteed to make you need to return for medicine—really an amazing business plan—as well as batteries, cameras, lawn chairs, toys, seasonal decorations (there’s an inflatable for everything now, isn’t there?), clothing, magazines, printer toner, and picture frames. A one-stop-shop of detritus to go with your Latisse prescription (just in case you suffer from thin eyelashes).

Oddly, for a pharmacy, the place and dignity of the body seems in short supply. I compare it to a pharmacy I was in several months back, a store no larger than my living room, with one clerk and a very modest selection. Deodorant? Yes, but only two varieties and only four sticks of each. Shampoo? Of course, but not two aisles worth, just a single shelf. And all in simple and tasteful elegance.

Only products for the body, necessities like medicine and luxuries like make-up (although not perfume, which was sold at a slightly larger store next door), but no Christmas lights or hula hoops or greeting cards, and thus a place of scale, decorum, quiet, and even a kind of beauty. A place where the body and its needs were acknowledged and met with graciousness, but not a place where the bodies needs were lumped in with a dazzling plenitude of competing options for each desire, and certainly not a place where needs found themselves placed alongside a random litany of other consumables, most of which seemed designed for impulse shopping.

The big store degraded the body even as it provided for it, even as it degraded the legitimate place for cameras and paper goods. Yes, these things all have their place, but is there place really jumbled together in a mega-convenience store, with the disorienting vertigo of every desire given equal import and significance? What does it say that prophylactics and cholesterol medicine are cheek by jowl with baby toys and frozen pizzas? Doesn’t it reveal a cacophony, with each aspect of our lives bundled into indiscriminate clusters of desires and needs, impulses and anxieties, with each degraded when removed from their proper place and domain of intelligent deliberation?

In old town centers, one tends to find smaller stores, ones which used to be mostly dedicated to one sort of product. The garden nursery sold plants, the lumber yard stocked plywood, the bank cashed cheques, the café boasted of their coffee and pie, and the drug store carried none of these things. Bracket, just for a moment, the questions of convenience and economic scale and ask instead about dignity. These small centers allowed dignity for the owners and clerks who actually knew something about what they stocked, just as they allowed consumers the dignity of their own concerns and projects to be organized coherently.

This sense of dignity explains in large measure the aesthetics one tends to find still in more upscale neighborhoods with their boutiques and specialty shops, paper stores and cheese markets, small hardware stores and bakeries. For those who can afford dignity, it is provided, and it is provided with a tacit nod to the integrity of particular projects and needs, an integrity which sees the need to distinguish the various domains of life, both needful and luxurious, but to give each their own place in our desires, plans, concerns, and consumption.

So often we seek convenience at the sake of integrity—think the drive through coffee shop—and very often around the needs of the body. We are deeply, deeply alienated from our bodies, which are for us tools of pleasure or use, but whose limitations are not considered from the vantage point of the shared collaboration of the social and personal with all its limits. We mistreat ourselves even as we splurge and binge on the body.

We’d be much better off if we gave the body some thought, some dignity, and even some space of its own.