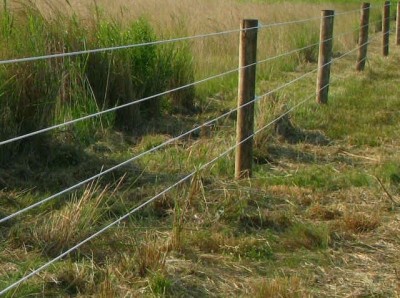 Hidden Springs Lane. We’re building fence this summer. I purchased 150 eight foot posts and we’ve been slowly planting them. We’re putting a paddock in the front and a larger one in the back. But before doing that, I put in 27 posts (for trellising and fencing) just west of the house on a south facing hill and planted 48 Norton vines. I need to get some wire up to a) support the vines, and 2) keep out the deer, which are real pests in these parts. The Japanese Beetles have already discovered the grape leaves, but my thumb and forefinger have taken out plenty (they look metallic, but they’re actually kind of soft).

The fence is taking longer than I planned, which seems about par for this course. Fortunately, the soil is remarkably free of large rocks. We’ve put in 60 or so posts and have had to use a digging bar only a couple of times. There was one hole that took an hour to dig as it involved pounding through lots of rock, but most holes take less than ten minutes with a post hole digger. Getting the posts in a straight line and tamping the soil is what seems to take the majority of our time. Just when he started to be really useful, my oldest son got himself a job with a landscaper, so he’s missing most of the fun. My two youngest sons have been game, but I’m pretty sure they wouldn’t call this fun. Especially when the temperatures climb into the 90’s. Ideally, we get an early start and knock off by early afternoon.

Today my neighbor mowed his field that is adjacent to the field I am fencing. He uses a tractor with a bush hog mower pulled behind. This is the first time he’s cut the field since I started putting in the fence. He clipped one of my corner posts (set in concrete). It’s all out of whack. I will have to dig out the hole and reset the post. I was using that post as a guide for the line of posts I’m putting in—a long string connects two corner posts and (if the wind stops blowing) forms a straight line. It would have been much simpler if he had taken out a post that wasn’t my anchor and my guide. This is going to be a pain. Robert Frost said good fences make good neighbors, but what happens when the neighbor sabotages your fence? We’ll see.

Of course, the fence is to contain a cow and a calf that we’re hoping to acquire in the fall. I need to build a small three-sided barn as well. I’ll probably use pallets like I used to build the chicken house. Speaking of which, we currently have 72 chickens. That’s about forty-nine too many. The fifty Cornish Rocks I picked up at the feed store on May 5 (they were two days old then and one has since died) are now humongous eating and pooping machines. Some people wait until they are eight weeks old, but they are plenty big now and they are eating me out of house and home—about 25 lbs. of feed per day. I’m expecting them to dress out in the neighborhood of five lbs. each. Besides, they are not good in the heat, and things are warming up here in Virginia. I’ve set up shade for them, and I have a fan on them, but right now they just eat, poop, and pant (yes, chickens pant—just like dogs except they look more miserable when they do it). I’m going to rent this contraption, which ought to make things go smoothly. There are six killing cones, a scalder, a plucker (can do six birds at a time), and an eviscerating table. The key will be finding enough helpers to keep the line moving—one son is willing, the other two are, well, less than eager. The wife (who suggested we raise some meat birds) is questionable. If we start killing them at 6am, we can hopefully be done before it gets too hot.

In preparation for the chickens, I’ve been cleaning out the chest freezer and attempting to eradicate the smell of death. You see, several months ago, we got a new internet provider. An underground cable was run to the house and some kind of switch box was installed on the wall in the garage. To the single outlet on the wall was plugged the switch box and the chest freezer. Sometime after that, the fifty chicks arrived. I put them in the garage with a heat lap over them. For some reason, I unplugged the freezer to plug in the heat lamp and didn’t set things up so the freezer could be plugged in elsewhere. A couple weeks later someone went to the freezer to get a venison roast and death rolled out in waves. Needless to say, the contents of the freezer were lost. And perhaps just as needless to say, getting the smell out of the freezer has not been easy. I scoured it with Pine-Sol and then vinegar. Then, perhaps recalling how Odysseus purified his home with fire after slaughtering the suitors, I burned incense inside and then lit my bee smoker and got it puffing out great quantities of smoke and then closed the lid of the freezer on it. The smell of death is gone, but the smell of smoke, it turns out, is not easy to eradicate either. A few days in the sun has reduced the odor fairly well. All that to say if you come to my house and the chicken tastes a little smoky, it may not be the mesquite on the grill.

Some of you may recall that my bees died over the winter—mites I think. I was a bit slow to purchase more (they are scarce and expensive this year), but last week I noticed a lot of bees around one of the hives. On Sunday I put on the veil and peeked into the box. It appears that a swarm has settled in. What an unexpected gift. Now I need to make them feel at home (bee hospitality?) so they won’t abscond (or die). Maybe another swarm will take up residence in the other hive. Getting them for free is a lot better than paying

One of my neighbors has suggested that we go in together and purchase a couple of goats to clear out the weedy, poison ivy mess between our properties. I’ve hacked through some of it, and I’d be delighted to outsource the work to a creature that is immune to poison ivy. After the goats do the work, we could eat them. How’s that for economy? The goats eat the stuff I want to get rid of (and that gives me a rash); in the process the goat converts those undesirable plants to meat; and then we eat the goat. There’s a simple elegance to the whole plan; although, I’m not sure the goat would agree. But, as seems to generally be the case, things elegant in theory often tend to be more complicated in practice. At the very least, there’s a fence to build.