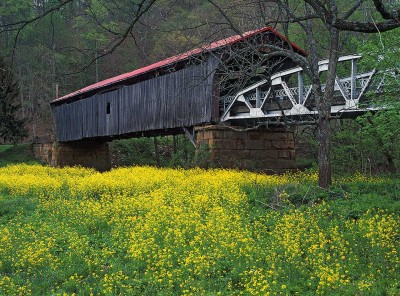 Historically, the locals have called Pompaples, Switzerland the “milieu du monde.” Not to be confused as a claim about its importance as a cultural or political influence, the title refers to the interesting, well notable, phenomenon of the waters of the Nozon River flowing both to the north and to the south, out of the village. In spite of such an impressive designation, water flowing two ways does not quite make the hamlet a tourist destination. In a country full of picturesque places, the short train ride from Lausanne to Pompaples is not often taken by people looking for a photograph to add to their vacation collection.

Pompaples would probably have never gained my attention except that it is the village from which my ancestors immigrated 200 years or so ago. While the move may have been interrupted by a stay in Paris (who can blame them for that?), at least one of the Bonzon clan left the rolling hills north of Lake Geneva for the greener pastures of North America. In 1803, Peter Bonzon left Europe for the hills of western Pennsylvania along the Beaver River. From the farm that Peter established there, which stayed in the family for decades, some of his children continued to move by following the nearby Ohio River and dropping the final “n” from the family name.  In their search for good farm land they happened upon Scioto County in Ohio which had only recently gained statehood. And there many, if not most, of the next several generations decided to stay. But that is about to change. When my father’s generation dies there will be none of my immediate family left in Scioto County. There will be few, if any, of my extended family living there either.

Neither the farm land nor the beauty of the hills nestled up against the river has been enough to keep us rooted. But the story of my family’s departure from Scioto County is only a small part of a much bigger story. The area at the southern tip of Ohio is considered part of Appalachia or the “Great White Ghetto” as it was called by Kevin Williamson in a recent National Review article. A few interstate highways sketch the boundary of southeastern Ohio so you are more likely to drive around the territory than through it. To have someplace within the region as your destination means you probably have family still living there or you are vacationing at a cabin in the hills. The industrial heartbeat that once pumped vitality through this region has slowed to a dangerous level. Or maybe more aptly put, the economic, cultural, and political waters seem to flow only out of the hills leaving behind a people and a land searching for what has been lost and what may come.

The “urban” center of Scioto County is Portsmouth. Once a thriving town of over 40,000, its population has shrunk to under 20,000. It once boasted an NFL team (that left for Detroit), an amusement park, low unemployment and produced such notable people as Roy Rogers, Branch Rickey, Kathleen Battle and several professional athletes. But a succession of departures of the major employers has crippled the area. First the shoe makers left; then the steel mill that was the dominant feature along the river for decades slowly closed shop; and finally the uranium enrichment plant up the road in Piketon closed. Like many small towns, the hospital now is the largest local employer which says more about the aging and unhealthy nature of the local population than it does about the economic climate for healthcare.

For years the cliché was that you learned the 3 r’s in school: readin’, (w)ritin’, and route 23. Route 23 leads north to the once promised land of automotive jobs in Detroit, and the route the football team probably took to become the Lions, but now the more likely destination is Columbus where young  people go off to college and eventually find jobs. Even for those who may want to come back, there are few ways to make a living. It is not unusual for those wanting to live in Portsmouth to make the hour and half commute to Columbus or some other far off destination for a job.

The toll of both the permanent and daily exodus is immense in terms of the loss of young, creative, energetic people but also in the social capital used up in making such a commute. Reading the local newspaper can be like reading one of Donald Pollock’s short stories from Knockemstiff. Portsmouth’s recent reputation at the national level has been as a center of illegal prescription drug trade. There are “dope houses” around every corner, to quote family members, and with the rise of a drug culture comes the uptick in crime, the need for increasing social services to care for the extended line of lives affected by addiction, and the decline of stable family structures.

It is a painful drive through Scioto County for me when I return to see my parents, not that the surrounding counties are much better. As I go past houses and vacant store fronts in various states of disrepair, I wonder if the membership of these towns and villages has been so dis-membered that they just don’t care. How could such care be rekindled? Based upon what hope could they imagine a different life? The possibility for hope seems to flow out of town as fast as the cars head north and as steady as the Ohio River meanders west.

Those who reflect on what is happening here and in other small towns scattered about the U.S often invoke pity from afar and present a superficial view of the people. But Portsmouth is neither a ghost town nor the scene of an apocalypse.  In spite of its severe challenges, it remains a place to call home for many.  Among the failing structures and dire statistics are real people trying to heal the wounds with big ideas and small acts. It takes a lot of energy to just survive, to patch up the injured around you, and not simply be overwhelmed by it all. The story of Portsmouth continues on and more murals will be added to the collection upon the floodwalls that protect the town. But for the foreseeable future it will be more a story of struggle than one of triumph as the spirit of the place continues to flow two ways out of town.

When my family disappears from Scioto County I know that my decision to not return will make me responsible, in part, for breaking a chain linked back for more than 150 years. Such a return always requires a sacrifice and I cannot bring myself to sacrifice the things I have come to love: my farm, my current community, the life we have built here. I am not so naïve to think my moving back would stem the flow out of Scioto County. But somehow the Bonzon family that has stayed rooted in Pompaples for over 500 years seems to have contributed to a place that continues to flourish in spite of being a place often passed by. And for years we have contributed to the good of Scioto County and that is about to end when the place needs all the good it can muster.

My job at a local college brought my wife, my son and me to Michigan several years ago. As the only Bonzos for miles around, our name will also quickly pass from this place too unless my son decides to stay and keep our small farm going. The continuing dislocation of my family will no doubt continue and be even easier once the roots are loosened from the land that nurtured the generations before me. As our family story flows only away from Portsmouth, I am left wondering: how much good a family can offer a place over only one generation?

Matt Bonzo teaches philosophy at Cornerstone University in Grand Rapids, MI. Along with his wife and son, he also runs a small farm.