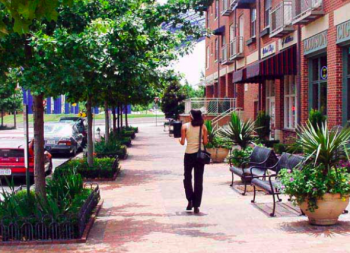 [This post is adapted with permission from “Metaphysical Realism, Modernity, and Traditional Cultures of Building,” an essay in the anthology Why Place Matters: Geography, Identity, and Civic Life in Modern America, edited by Wilfred M. McClay and Ted V. McAllister.]

Architecture always symbolizes power, and the aspiration of its makers to legitimate authority.

and the Corollary is:

To elaborate — and if only to contravene our own modern habit of viewing buildings as isolated objects — let me begin with urbanism and then move to architecture. Because of our common modern tendency to understand urbanism primarily in terms of economic exchanges and lifestyle choices, I want to begin with a characterization of urbanism that I contend is true of all cities, modern and pre-modern, large and small.

It goes like this: Whatever else a city is, it is constituted by five conceptually different orders that exist in dynamic and reciprocal relationship with each other. A city is always and everywhere and simultaneously an environmental order, a demographic order, an economic order, a moral order, and a physical/spatial formal order. These orders may be better or worse, and they may be more or less recognized and acknowledged; but they are always present, and always in play, in cities ancient and modern. But there are also differences between traditional cities and modern cities, and perhaps the most fundamental difference between them is that inhabitants of traditional cities generally understood themselves and their cities to be grounded in sacred order; whereas inhabitants of modern cities understand (correctly) their cities and suburbs to be expressions of corporate and individual will-to-power, though these are usually described as “market forces” and “individual choice.” What are the physical and formal features that denote these two different understandings of cities?

Let me begin with traditional urbanism, by which I mean in the most general sense walkable settlements characterized by the pedestrian proximity of a variety of uses and activities accessible to human beings of virtually all ages. One elementary and recurring characteristic of traditional urbanism is the mix of uses that exist within a distance of a quarter-to-half-mile — a five-to-ten-minute walk for most human beings. Because of its relationship to the human body, the walkable mixed-use neighborhood is the fundamental unit of traditional towns and cities. A neighborhood or two standing alone constitutes a village or small town, while an accumulation of neighborhoods constitutes a larger or smaller city. In the latter case (in architect Léon Krier’s memorable image), a neighborhood is to a city as a slice of pizza is to the whole pie: a part that contains the same essential ingredients as the whole. In contrast, a post-1945 suburb separates all the “ingredients” of everyday life into allegedly functional zones, inaccessible to pedestrians. In addition, traditional urban settlements are hierarchical in form, characterized by a reciprocal relationship between public spaces and the more prominent religious and civic “foreground” buildings, and the less prominent domestic and commercial “background” buildings — which when assembled altogether become traditional urbanism in the form of both towns and cities.

I have been referring to public spaces, and the importance of space in traditional urban environments. The traditional city is above all a spatial environment, and the idea of urban space is not at all ethereal or “spiritual” or slippery. In traditional urban settlements, space is not a void without form, but rather its opposite. Traditional urban space is a void with definite form, something with breadth and depth, with limits, with figure. Moreover, space can be configured. Space is an artifact, something that human beings can and do make. Shaped space is where much of what is most important in human social life takes place, whether in the intimate space of a private room or in the public space of a street or a plaza. The point I want to emphasize here is that, historically, space has been a product of and container for human communal sociability, and is the medium of traditional face-to-face urban culture and civil society.

As early as 1840 Alexis de Tocqueville saw and began to articulate that modern democracy has an inherent tendency to promote the phenomenon not of selfishness but of individualism. What Tocqueville long ago recognized as American individualist culture in potential is today American individualist culture realized; and with respect to the built environment, modern individualism finds physical expression in at least two ways, one elite and one popular. Elite individualist expression can be seen in the buildings of the small but highly publicized world of avant-garde architecture, the domain of The Artist, the aspiring symbolic content of whose work is to legitimate freedom to live an experimental life as an authoritative cultural ideal. But the most popular and pervasive physical expression of contemporary individualist culture is the post-WWII American suburb, which manifests the ideal of a freestanding house in the natural landscape.

There is nothing intrinsically wrong with this ideal, and it actually has a long history in Western culture; but until the eighteenth century it was pretty much an exclusively aristocratic ideal, valued typically as a temporary respite from urban life. However, when that ideal became democratized in the modern era in opposition to the Industrial City, it set off a series of historical events the result of which is not an agricultural landscape dotted with grand or modest villas, but rather a “middle landscape,” neither rural nor urban, that practically everywhere looks like contemporary Long Island, New Jersey, and suburban Atlanta. Such automobile suburbs are what Americans since 1945 have been building almost exclusively, and exporting to the rest of the world — and are correctly understood as a physical embodiment of the inherent democratic cultural tendency toward individualism identified by Tocqueville, one made materially possible by government policies and the proliferation of the automobile. The post-1945 suburb is a world of unprecedented private luxury that is simultaneously and strikingly a world of unprecedented public spatial poverty, literally an anti-spatial environment, a world in which the public realm doesn’t matter.

In contrast, space is the medium of traditional urban life; it is where most of public life in traditional (pre-1930) cities takes place. And by “traditional urban life” I mean not only the dense historic urban center habitat happily consumed (but generally not produced) by today’s postmodern cosmopolites, but also the traditional working-class city neighborhood and traditional small-town habitats of Front Porch Republicans. Spacein these places is not a vague or amorphous concept: rather, urban space denotes a class of things possessing specific names that denote a variety of spatial types: public urban spaces such as the park, the plaza, the square, the boulevard, the avenue, the street, and the alley; and private and semi-private urban spaces such as the courtyard and the cloister garden, as well as the transitional forecourt — traditional urban spaces all.

If the most obvious formal difference between the traditional city and the modern city is the difference between a spatial environment and an anti-spatial environment, the fundamental difference between traditional buildings and modern buildings concerns their materials and methods of construction and their corresponding durability (or lack thereof). Buildings in pre-modern societies for the most part were made with materials locally available and locally produced. These were low embodied energy materials, in several ways: (1) in terms of their inherent properties as materials drawn from the earth and in need of relatively little refinement; (2) in terms of the relative ease with which they were acquired, prepared for use in buildings, and employed in the building construction process; (3) in terms of the energy required to transport them from their point of origin and manufacture to the building site; and (4) in terms of the energy required to repair and maintain them over time.

In addition, as I noted earlier, traditional buildings more than modern buildings are characterized by an integral relationship between structure and enclosure. To put this most simply: in contrast to most modern construction, the walls of a traditional building also hold the building up. Prior to the modern era, admittedly under conditions of scarcity and lacking mechanized means of transportation, human beings typically made buildings characterized by the identity of structure and enclosure: the exterior walls of the building were also part of the structure of the building, typically mud, bricks, blocks or stones piled up on one another in compression. In contrast, standard practice in today’s construction industry is for exterior walls to fill between and/or be attached to a building’s steel or concrete structural frame (or its diaphragm of wood or steel studs), a practice generally not as durable as traditional construction because the building’s component parts are not integral. This lack of integration makes buildings more vulnerable to water penetration and ultimate deterioration over time as their unintegrated components expand and contract during seasonal freeze-thaw cycles. (Such buildings are especially vulnerable if they have a flat roof anywhere but in arid climates.)

Moreover, again in contrast to traditional construction, most modern construction employs comparatively high-embodied energy materials that are, for now, still relatively easy and inexpensive to manufacture and transport in an era of cheap energy. How long that can continue remains to be seen; but the facts are that traditional construction both employs lower embodied energy materials than modern construction and is generally more durable than modern construction. Stones artfully piled atop one another will stand a thousand years or more with minimal regular maintenance. Today’s modern architectural tours de force are lasting a generation or less before requiring expensive maintenance and repair.

Philip Bess is a professor of architecture at the University of Notre Dame, where he teaches graduate urban design and theory. The complete and fully referenced version of this essay can be read in Why Place Matters: Geography, Identity, and Civic Life in Modern America, published in 2014 by New Atlantis Books/Encounter.