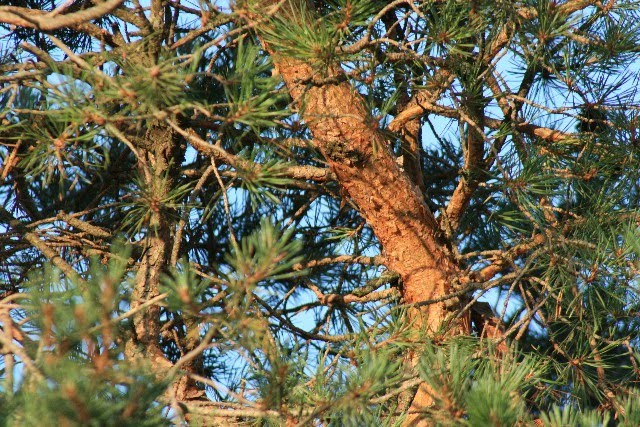 In the incomparable Sand County Almanac Aldo Leopold declared November the “month of the axe.” November “is warm enough to grind an axe without freezing,” he wrote, “but cold enough to fell a tree in comfort.”

Conservation, as usual, was on his mind:

I have read many definitions of what is a conservationist, and written not a few myself, but I suspect that the best one is written not with a pen but with an axe. It is a matter of what a man thinks about while chopping, or while deciding what to chop. A conservationist is one who is humbly aware that with each stroke he is writing his signature on the face of his land. Signatures of course differ, whether written with axe or pen, and this is as it should be.

Leopold’s own signature betrayed what he called an a priori bias for the pine over the birch, and this he found a bit unsettling; or, as he put it, “it is disconcerting to analyze, ex post facto, the reasons behind my own axe-in-hand decisions.”

(It is a matter of what a man thinks about while chopping.)

Leopold admitted that he “always cut the birch to favor the pine. Why?”

He said that the reason could not merely be a preference for the pines he had planted over the birches that “crawled in under the fence.” That is, his preference was not simply paternal. And he would go on to admit that the pines would live twice as long and be worth more in the market place, that they would remain green year round and so, like him, brave the winter. The pine, too, would foster a more diverse undergrowth than the birch and provide a home for the pileated woodpecker. On the other hand, although a pine would shelter a grouse, a birch, Leopold admitted, would feed him.

But, there amid the disconcerting ex post facto analysis, Leopold said something almost too unassuming to be noticed.

The birch is an abundant tree in my township and becoming more so, whereas the pine is scarce and becoming scarcer; perhaps my bias is for the underdog. But what would I do if my farm were further north, where pine is abundant and red birch scarce? I confess I don’t know. My farm is here.

How many admirers of A Sand County Almanac, how many readers and re-readers of this tremendous little book, have read the last four words of that paragraph and sailed on by, as if what matters is not what a man thinks about while reading? I confess I whizzed by them far too many times before the trunk of their significance at last fell in my path and brought me to a screeching halt.

My farm is here. Here.

When you consider for how long, and with what import, the principle of local adaptation has been a non-negotiable part of our science, and yet for how long men have exempted themselves from its rigorous strictures, not adapting themselves to their places but requiring their places (and many others) to adapt to their traveling desires, you have, perhaps, some explanation for the speed at which it has been possible to whiz by Leopold’s little four-word sentence—and the frequency with which that whizzing-by has been done.

I would not simplify the reasons for which this anomalous exemption from local adaptation has come about and become permissible, though I would point to two circumstances that are clearly implicated. One has to do with our impressive but temporary “triumphs” over nature, made possible in large measure by what will prove to be the short-lived (but obviously reversible) benefits of cheap energy and readily available antibiotics. By means of the artificially elevated short-term fertility that has characterized modern agriculture we have raised, artificially, the carrying capacity of the earth, and this has been good news for a population artificially elevated by antibiotics—and, of course, by increased food production. The success of all this artifice is, as I say, one reason we may feel exempted from what we otherwise regard as an unbending universal law requiring of all creatures save ourselves local adaptation.

Another reason, at least in my view, has to do not with our “triumphs” but with our hubris. In most of our work we have readily substituted standards other than those imposed by place, standards that appeal to what is perhaps most base in us. Our universities, to give but one example, have not, so far as I can tell, cared at all about where they are. They have been far too busy adapting to “industry standards” (grants, publications, international programs, distinguished visiting scholars, etc.) to adapt the work of the university to its place, and this, no doubt, accounts for all the blather we hear from universities about turning young men and women—at their own expense, mind you—from people who came from somewhere into personnel who are going everywhere: that is, from boys and girls, Bobbies and Suzies, into “global citizens” composed of interchangeable parts.

Is there an abundance of birch and a paucity of pine in the region? Who cares? My university is everywhere. I am everywhere.

Against this kind of everywhereness that “global” and “globalization” imply, Leopold insisted on a different standard that required of him only the most obvious of observations: that he was in Sand County, not some other county; that he was in his township, not one further north; that he was on his farm, not someone else’s. And so he went to work restoring his place, not someone else’s. But first he became a careful student of a small part of Wisconsin. He asked, “where am I?” and set out to offer a full and careful answer to that question.

“My farm is here” are four words to save the world. But if they are to save the world, they must be careful never to aspire to any such grand and worldly program. They must teach the man in whose ears they fall, as they did the man from whose lips they issue, that the first order of business is to reduce things to the scale of his own competence, and that means endeavoring to be nowhere else but “here.”

I do not deny that some problems confronting us are going to require changes—and I mean policy-level changes—that are going to have to be big enough to extend beyond “here.” But no amount of bigness can substitute for a citizenry that knows where it is. No amount of bigness can substitute for men and women who know where they are and who know how to say, “my farm [or my neighborhood or my community] is here.” When we see true local adaptation of this sort, we will understand how destructive the substitute standards are, especially those of the university, the corporation, and the government, and how inimical they are to the health of the places in which each of us lives, if indeed we live in places at all.

If I have allowed that we’ll need to take action the effects of which will extend beyond a given place, and I have, I must emphasize that such action is not and cannot be more important than learning to live by the four words that, in saving all the world’s knowable places, can in turn save the big thing that none of us can ever know and should probably stop worrying about. First things first. Work on your preference for pine if you must, but situate the preference where it is, not where it isn’t.

My view, for what it’s worth, is that there isn’t any bit of national or world news any of us is going to come across tomorrow (and tomorrow and tomorrow) that can do us more good than reading “November” in A Sand County Almanac. The example of Leopold, who spent a good part of his life working on big problems, is to know the minute particulars of this farm here.

I might add—maybe only because I read it again recently—that in his Jefferson Lecture Wendell Berry had this to say about Leopold:

I don’t hesitate to say that damage or destruction of the land-community is morally wrong, just as Leopold did not hesitate to say so when he was composing his essay, “The Land Ethic,” in 1947. But I do not believe, as I think Leopold did not, that morality, even religious morality, is an adequate motive for good care of the land-community. The primary motive for good care and good use is always going to be affection, because affection involves us entirely. And here Leopold himself set the example. In 1935 he bought an exhausted Wisconsin farm and, with his family, began its restoration. To do this was morally right, of course, but the motive was affection.

I’ll add, and I think Berry would agree, that affection for the world is useless if it isn’t realized in affection for a place small enough to give yourself and your affection to, such as an exhausted farm in Wisconsin. God might have so loved the world to have given his only begotten Son to save it (and nitwits might think end zones everywhere the proper place to declare this), but a world is pretty damned big—and pretty damned. It requires the love of a God.

I don’t aspire to love the world. I’d blow a gasket if I did. Let us love what’s commensurate with our capacity for love—remembering, if it’s helpful, that the example of the incarnate Son is not abstract but particularized love. His farm is here.

If that doesn’t work for you, compare monogamy to its inferior and far more complicated alternatives.