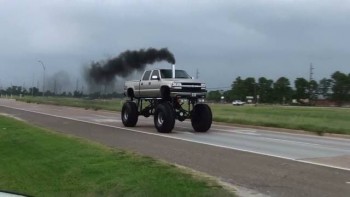 Thanks to a good friend, I’m now up to speed on the phenomenon of “Rollin Coal,” which one commentator describes as “a new trend in which anti-environmentalist idiots with nothing better to do modify their diesel engined trucks to burn fuel less efficiently on demand and thus belch out toxic fumes onto innocent bystanders, Prius drivers, cyclists and anyone else they take a dislike to.” I’ll admit, part of me finds the videos absolutely mesmerizing. I mean, the notion that you would trick out your truck so that it was less efficient, utterly conspicuous, and infuriating to a good many others, plus that a whole subculture exists devoted to this, is just stunningly odd to me. And sort of hilarious.

It’s the “in your eye” aspect which is so compelling. These guys want to ride up next to a Prius and give it some throttle. They want to give the whole world (or what they perceive as the established world) a rude gesture, want to be yelled at, and want to laugh about it all the way home.

So much of our contemporary life feels like this, it seems to me. The uptight bobo, latte-drinker in their North Face fleece hovering around their expensive baby stroller on the way to a Spanish flash-card session for three-year olds yelling at the t-shirt wearing “Rollin Coaler” spinning donuts in the parking lot. One side clamping down with all sorts of rules and regulations while the other flouts them.

And yet a deep commonality binds them together, namely their antinomian streak.

In a recent, and brilliant, essay for First Things, R. R. Reno works through the metaphysical dream of what he terms the “Empire of Desire.” Borrowing from Richard Weaver, he notes that “every man participating in a culture has three levels of conscious reflection: his specific ideas about things, his general beliefs or convictions, and his metaphysical dream of the world.” In our own age, the first two levels are mainly pragmatic, although robust in their regulatory discipline, for disciplinary they are: “No smoking! Count your calories! Build your résumé! Save for retirement! Safe sex! Locally sourced food!”

At the third level, the metaphysical dream, lies a counter-tendency, not regulatory but antinomian: “We are trained to be suspicious of longstanding moral traditions; we are told to adopt a critical attitude toward inherited norms. That’s not just an academic habit of mind. It serves a moral conviction, widespread though often tacit: that human beings flourish to the degree that they’re free to satisfy their personal desires.”

As a result, those who are most tuned-in to our culture’s momentum are highly organized and self-controlled about education, safe-sex, health, marriage and divorce, financial savings and so on, even as they exercise this control to safeguard and prolong the mostly arbitrary whims and desires of how they define the good life, and for many, the good life becomes nothing much more than exercising those regulations. Think of the disdain exhibited yoga-panted, Land Rover driving, skim milk selective-college liberal arts grad on their way to Pilates as they’re passed by a Rollin Coal truck. The elite is not really sure what their life is for, but it’s theirs to do with as they wish, without much in the form of religious or cultural weight, and what life is for is driving your Land Rover to Pilates.

But the guy driving the truck? Is he different? He’s not accepting of the judgments on the first two levels of reflection, namely, specific ideas and general beliefs. On the Prius vs. the F-150 they differ, on what to drink, where to shop, the status of kale, for whom to vote, on all this perhaps they differ. And yet the metaphysical dream is the same, it is the Empire of Desire, on living life as you wish, for no reason more substantial than that you wish it.

At a recent long-weekend bar-b-que, two of my neighbors had an interesting exchange. A working class “local,” and a cosmopolitan “newbie” were in conversation. The “newbie” somewhat inexplicably went out of his way to say that he was a progressive, several times using this word. A friendly conversation ensued in which he mentioned also that he missed the gated community from which he just moved. The local wondered just how a progressive could live in a gated community, at which point it became clear that being a progressive didn’t mean exercising a preferential option for the poor or any such thing; it meant, rather, being against the tradition on religion and sex.

Turns out, of course, that a good many of the locals are also not so excited about traditional religion and sexual mores. They don’t like the panty-waists who live in gated communities or drive smart cars or watch soccer, but the point of their lives is still basically antinomian. The dwarves are for the dwarves!

So the Rollin Coal driver spouts a kind of devil-may-care libertarianism, both in his actions and his metaphysical dream, while the modern elite sneers at this as they follow an identical metaphysical dream. No one fights like cousins.

Meanwhile, largely ignored by both, thought mostly incomprehensible, are the adherents of a different metaphysical dream, one in which the world is charged with the grandeur of God, where nothing is small because everything carries a deep, even divine weight, and our freedom operates best in reverence, piety, and love. Those who value the empire of dust, of soil, of country.