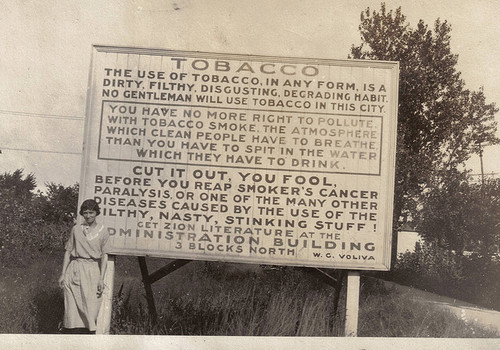 From 2003 to 2005, we lived in Craighead County, Arkansas, while I taught at Arkansas State University. Craighead was a dry county, having voted many years ago to prohibit the sale of alcohol in its borders. Despite numerous efforts by restaurant owners and others over the years, that public decision remains in place today.

As a bunch of Mormon teetotalers, this instance of prohibition didn’t bother my family and I at all, not did it appear impact our social circle in any noticeable way. (At faculty get-togethers, it was common for one or another graduate student, having received prior assignment, to show up at some point during the festivities with a duffel bag full of wine and beer for those who chose to imbibe.) I’m grateful for it all the same, though. Primarily because it gave me an up-close chance to talk to people about, and think about, what it means when one segment of the general population–a population that is, despite what some may think of rural northeastern Arkansas, every bit as affected by the larger commercial and pluralistic world as any distinct group of 100,000 people (70,000 of whom live in the city of Jonesboro, where ASU is located) anywhere in the USA is likely to be–comes to a collective judgment which effects the whole population. In other words, when a local majority (in this case, a union of white and African-American conservative Baptist church-goers) democratically turn their moral and religious judgments into law.

This issue is back on my mind this week, because of a couple of recent events. One took place this past Tuesday here in Wichita, when the backers of a petition (one of whom was me) to greatly reduce the criminal penalties attached to the possession of small amounts of marijuana gathered during a meeting of our city council to urge them to put the issue on the ballot, despite having fallen a few dozen signatures short in our initiative effort, and despite concerns over state and federal authority and the wording of the resolution. The other took place online, when my old friend Damon Linker published a challenging article which argued that the success which libertarianism has enjoyed in the United States is almost entirely the result solely of a rise of non-judgmental moral “libertinism”:

Americans now inhabit a world in which increasing numbers of individuals find it difficult, if not impossible, to imagine submitting to rule by any authority higher than themselves on moral and religious matters. Sure, people continue to accept that one will be judged harshly and punished for violating another individual’s consent (the only libertarian moral consideration). But beyond that? Don’t be ridiculous. Who are you–who is anyone–to judge my behavior?

Damon used as an example in his piece the case of a young woman at Duke University who has achieved some small  fame for performing in pornographic films as a way to pay for her education, a career which she has defended in part in libertarian language. This in turn prompted a long online debate between Damon and various libertarian interlocutors, revolving around the frustration one libertarian writer felt at being put into a position of not only not judging, but in fact embracing as a positive act of liberty, something that she considered deeply unwise:

As a libertarian, I want pornography and even prostitution to be legal, if reasonably regulated. But as a survivor of hookup culture, I can’t even implicitly condone rampant, publicized promiscuity (which even on camera and for money constitutes rampant promiscuity nonetheless). Keeping your experiments in sexual growth small and private helps to limit their potential to damage both yourself and our normative socio-sexual frameworks. I want to live in a community where people understand and respect that we are all sexual creatures, enjoy their sexuality in pro-social or at least benign ways, and limit it otherwise. Such a hypothetical community does not treat the decision to perform in pornography (and then talk about it all over the internet) as just one unimpeachably empowering life choice among many.

The heart of the argument which followed was basically this: does standing for the principle of individual pluralism and freedom (which is, however you justify it, the position shared by all varieties of libertarianism) necessarily make it inconsistent to refuse to endorse, or in fact to judge negatively and wish to oppose, various choices that people make with their liberty? In other words, can supporting libertarianism as a political ideology be separated from supporting the choice to be a moral libertine?

This argument might not appear to have anything to do with our argument over the decriminalization of marijuana here in Wichita, but in my mind the two issues were connected. There are, of course, a large range of legal and political issues at play in our local debate (all of which influenced the ultimate decision of the city council–which was to instruct a member of their staff to work with the petition-gatherers to re-write the proposed ordinance and seek to obtain enough signatures to try again on a later ballot–much more than I think the should have). You have the question of state and federal jurisdictions over drug laws, the precedents established (or have they been?) by Colorado and Washington, debates over recreational vs. medicinal marijuana use, disputes over the rules which govern citizen petitions, etc. But hidden within all that is a familiar question (one which I’ve staked out a position on before): when you are dealing with an issue or a matter which involves consequences that would be experienced solely by the individual making the choice (and yes, despite the talk one often hears about marijuana being a “gateway drug,” the real costs of decriminalization, or even legalization, are widely recognized to be simply a–possibly minimal–increase of marijuana usage, with attendant effects upon vulnerable users…but not a crime wave or social breakdown), then on what basis, if ever, should judgments be allowed to turn into prohibitions? Most libertarians allow that, of course, you ought to be able to organize and express yourself in which ever way you want–but can that organizing, and judging, turn paternal?

Something I wrote in the aforementioned discussion may be helpful here. One could say that there are at least two, overlapping but non-identical, ways in which the refusal to exercise prohibitive judgment over another person’s choices could be formulated along libertarian lines, theoretically speaking. In one case, it’s for Hayekian reasons: generally speaking, you should refrain from developing one’s judgments in the direction of paternal action because you just don’t know enough to be able to speak knowledgeably about another person’s choices (particularly their moral, personal, religious, or sexual ones). That’s a powerful argument, one which I’ve taken more and more seriously as I’ve worked through the pseudo-anarchic positions developed by the scholar James C. Scott. However, I don’t see this as necessarily requiring that those in the libertarian camp have to support libertinism, because strictly speaking it leaves open the sort of local, contextual possibility that, in this particular case, at this particular time, some hypothetical person actually might know enough to be able to speak authoritatively about what another person is doing with their life. In the other case, though, the connection is strong, because you’re thinking in Lockean terms, not ones of epistemology but of property. Here, the demand that one not act paternally towards another arises not from the fact that you don’t know enough to judge another’s choices, but from the belief that you have no right to do so, because they own themselves (their rights, their conscience, their sense of self), and you don’t. This is a pretty reductive analysis, I know, but I think it perhaps helps explain why, given our rights-obsessed culture and Lockean intellectual inheritance here in the USA, we so often see a cross-over from a concern with personal liberty, to a refusal to countenance any negative judgments of, much less prohibitions regarding, behaviors or choices which some segment of the population (even a local majority) considers bad or wrong.

As someone who philosophically favors communitarian accounts of our actions, values, and needs much more than individualist ones, the question of prohibition comes easier for me. I don’t think there are, or at least don’t think their necessarily ought to be, any near-absolute philosophical roadblocks in the way of local communities democratically trying to define themselves, at least as regards matters which don’t come close to broadly accepted fundamental liberties. Buying a beer or smoking a joint don’t qualify in either case. So why is it that I am basically supportive of what the church-goers in Craighead County are trying to maintain, while in the case of Wichita I’m actively involved in trying to gain signatures and drum up support for a possible effort to challenge state and federal laws in regards to cannabis?

It’s in part because I’ve learned from Hayek, as well as from Scott; I’ve learned that large bureaucracies and entrenched laws too often stifle the sort of exploratory action which might enable people to understand better their own needs, to say nothing of the fact that such institutional structures too often punish, at great personal and social costs, all sorts of individuals who have worked out what their own needs are, and who attempt to get around those structures. Of course, that’s just a highfalutin’ and theoretical way of talking about those who find themselves robbed of the ability to find a job or participate in society because of stupid choice made when they were young, or those who are convinced (rightly or wrongly) that cannabis is something they desperately need for medical reasons. In other words, I’ve read their stories (probably most particularly here), learned about their situations, and come to greater appreciation of how this prohibition, at this time, is doing more harm than good. As always with me, it’s a context thing.

I’m still willing to defend particular paternalisms; I think any healthy community should, for the sake of preserving social norms and preventing the (I think) ultimately damaging (in both a personal and civic sense) glorification of ever-multiplying, never-judged choices. Defending one’s collective moral and cultural identity, and what it can achieve, is too important to be sacrificed to the cult of individual liberty. But if my communitarian ideas have changed at all over the past several years (and they have), it is that I know understand that a defense of norms and traditions–especially prohibitory, paternal ones–has to be able to constantly respond to the changing, pluralistic flow of information all around us. In this case, well, marijuana isn’t a drug I have any interest in, or would ever want any of my kids to use. But it isn’t, by any means, the worst thing they could do to their bodies (plastic surgery very like would be worse!), and if there people in my community that are being unnecessarily harmed by this prohibition, then I ought to recognize that the judgment I make as parent, in this case at least, is probably as far as I ought to allow my paternalism to go.

My Mask, My Choice