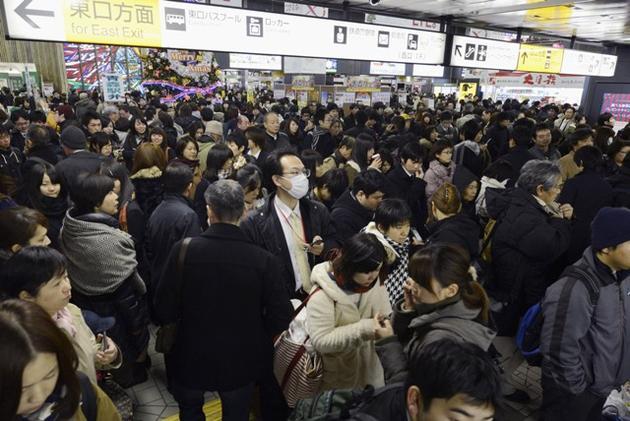 Japanese rail commuters ride train station escalators the way you might expect: those who are in no hurry stand to the right, leaving a ‘passing lane’ for those who walk or run up or down the escalator. The East Japan Railway, and the Japanese Times, want to change the way commuters ride on escalators, to decrease the number of escalator accidents. A recent article in the Wall Street Journal notes that a month-long effort by Japanese railroads has failed to change commuter habits. After the “Let’s All Grab a Handrail” campaign, commuters stubbornly persist in letting the harried and hurried pass on the left.

Upon reading this article, my economist’s instincts kicked in, suggesting a series of cost-benefit questions: Are the “250 serious injuries” experienced annually on East Japan escalators a lot? In its annual report, East Japan Railway reports 17 million daily commuters. If only a million of these ride the escalators, then the accident rate is 250 per 365 million, a very small number. How “serious” are the accidents? Broken bones? Twisted ankles? Deaths? How many are caused by running, and how many by walking? How many people get injured in the other parts of the train station (maybe the escalators are relatively safe compared to the steps, the platforms, and the newsstands)? How much time is at stake for those who are in a hurry, who would be slowed down if commuters refused to leave a passing lane? How much did the campaign cost?

I don’t know the answers to these questions; it’s conceivable that the numbers justify the concern about accidents. Nevertheless, something else about the article struck me as odd: both the railway and the newspaper were treating the courtesy of commuters as if it were a public health problem. This was a campaign against courtesy.

Surely it is a good thing that people are considerate of those who are in a hurry, but the railroad analysts appear to give little weight to commuter courtesies. Why would analysts and railroad executives undervalue the habits of consideration which have developed over the years on Japanese escalators? Perhaps they suffer from the common blindness of designers and planners, who see only an abstracted plan of the whole, and whose policy evaluations are based only on what is visible in their schematics. This blindness and its social cost are addressed brilliantly by James Scott in Seeing Like a State. From the point of view of the railroads, railways and escalators exist to move people safely; from this perspective, anything else that happens on an escalator or in a rail car appears “extraneous,” because it does not show up in the numbers. The courtesy which opens up the passing lane on the escalator, or which refuses to obstruct the passage of those in a hurry, is a cause of accidents. Whether the courtesy is itself a good thing—something that would be a real loss if it were curtailed or forbidden—does not enter into the problem as planners frame it.

To be fair, it may be that the Railroad has identified an important risk. As I have said, I don’t know the severity of the 250 injuries. But even if it is the case that the risks are serious enough to consider changing commuter behavior, how should the tradeoff between courtesy and injury be evaluated? If the curtailment of courtesy resulted in 100 fewer injuries would it be worth it? What if only 50 injuries could be prevented by repressing the impulse to be courteous? How about 10?

I suspect the courtesy receives no weight in the calculation. Even if it were included, I know of no precise way to make this cost-benefit comparison: the goods of courtesy and safety are not absolutely incomparable, but neither are they fully comparable. Traditions of courtesy ought to give way to safety in some situations: the traditional treatment of the dead and dying in parts of West Africa are a terrible health hazard in the current Ebola outbreak, and ought to be modified in favor of respectful alternatives. But what if the stakes are not as high (no one is getting Ebola on Japanese escalators)? How severe do the risks have to be to turn a courtesy into a “public health hazard”?

If public habits of courtesy are not visible in the railroad’s plans and schematics, they are likely to be treated as something which has at most neutral value—tolerated so long as it does not pose a risk to a measured quantity, like injuries, the number of passengers, or their flow rate, but treated like as inefficient or dangerous when it hurts the numbers. But should we treat public courtesy as a neutral thing? A train station in which thousands of relative stranger are on the move is full of small courtesies. Some courtesies are universal, and some evolve to fit particular geographical and cultural settings through the subtle awareness of commuters to the needs and demands of others. If someone is in a hurry, people give them a break. To purposefully refuse to give way when you are not in a hurry and someone else is seems pointlessly rude. The person in a hurry observes a set of implicit rules, too, not claiming too much, being appropriately apologetic and grateful. These rules are not explicit, but they are known by the one in a hurry and the one who gives way. These rules and the processes by which they develop are good, even though the planners did not formulate them and do not enforce them. The successful resistance of commuters to attempts to change the rules is a testimony to their goodness and purpose. It will take more than posters and slogans to change them.

Courtesy may be undervalued in part because it is so malleable. People find ways to be courteous when the rules change; it is not eliminated when its present form is discouraged. If fist bumps replace handshakes because they pass on fewer communicable diseases (I will resist this, but expect the campaign soon!) we will lose something, but we will not lose warm greetings among friends and acquaintances. If commuters were expected/required to travel on the escalator two abreast (eliminating the passing lane), it is conceivable that new accommodations for rushed travelers would emerge; perhaps in a bank of escalators those in a hurry will take the escalator on the far left, and everyone else will take the other escalators, by implicit agreement and mutual adaptation. People were courteous before there were escalators, and will find ways to be courteous afterward.

My point is not that all forms of courtesy should be off limits and unchangeable. This is clearly not the case. Nevertheless, I worry that common courtesies are not valued at all in most cost-benefit analyses and public health campaigns, and that they will always have to be defended because they do not fit cleanly in cost-benefit frameworks. The habits of courtesy do not develop as a result of a public plan; they develop in ways that are difficult to formalize, emerging from the multitude of daily interactions among friends, neighbors, and strangers. Because they develop without anyone’s intention, let alone as a result of the plan of an engineer or public health expert, they have no advocate, no interest group. They are defended by stubborn resistance, by the unwillingness of people to act rudely when the small courtesies they value come under attack by those who do not value them properly. I am proud of the Japanese commuters who ignored the campaign and refused to clog the passing lane. This network of courtesy deserves to be taken more seriously. It is not inviolable, of course, but it is a common good.