Wichita, KS, is the home to a wonderful bookstore, Eighth Day Books. (Which isn’t my favorite bookstore in Wichita, but that’s partly because my wife works at its primary rival.) One of the main reasons it’s such a wonderful place is its sense of identity and vocation. It’s much more than a “Christian bookstore,” though it is that, and tremendously good at fulfilling that role in our community (see Rod Dreher sing its praises here, here, and here). But beyond that Eighth Day Books is the heart of a sub-community that has fascinated me ever since my family and I moved to Wichita nearly ten years ago. Traditionalist, usually (but not always) conservative, literate but only rarely academic, both reactionary and radical, Eighth Day grounds a motley, earnest, often brilliant collection of Christian thinkers and servers; even when I find myself somewhat perplexed by what I hear from some of them, I want to learn more. It’s very ecumenical; the folks involved are Orthodox and Catholic and evangelical Protestant (and so long as they keep on letting me through the door, Mormon too); within their numerous overlapping circles, you can find schools, retreats, university programs and institutes, study groups, and more. Once a year, Eighth Day hosts an already-large-and-still-growing symposium, which this year was devoted to exploring the idea of “wonder” in a world where longstanding traditions of the civic place of Christianity have radically changed. I was fortunate enough to be able to attend one of the days of the conference this year, and I adored it. What I saw and heard around me this past weekend was an example of the sort of both strengthening and challenging local and cultural civic work which communitarians like myself have banged on about for years (but which we, in all honestly, have only rarely managed to contribute directly to ourselves). 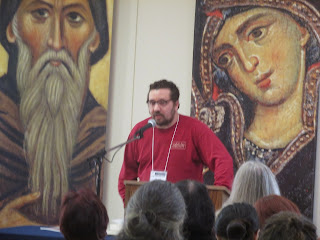 Let me share some ideas prompted by three presentations I listened to. The first was the symposium opening provided by Erin Doom, the director of Eighth Day Institute (and yes, that is how you spell his name). Erin is a fascinating guy; I suspect he’d far prefer to be considered a lay theologian than a community organizer, but really he’s both (and in fact, his efforts are themselves a testament to just how much working to make manifest and build up a community in a particular place is a type of Incarnational work). In presenting his vision of bringing together hundreds of people who, for reasons of curiosity or concern or just plain community attachment, wanted to spend two days learning, reading, and talking about the possibilities presented by our “secular age,” Erin talked about a “dialogue of love” which is needed, one that can best be realized through a return to certain key ecumenical elements of the Christian tradition. For him (as well as for many others throughout history), these elements are scripture, icons, and liturgy–all of which may be seen as revealing a certain kind of radical localist perspective. What they have in common is an enduring presence–as stories which get adapted and interpreted but which also transcend the passing of time and fashions, as images which transcend their own replication and commodification, as seasons of time which transcend the manufactured pressures of socio-economic life. These are points of resistance to the pace and the profits of our contemporary capitalist and centralized world; they can become resources of retreat, for those who wish to either prepare to hold on to something old and good, or harness their strength to push for something new and good–or, really, both. Its a wonderful vision–made all the more persuasive because those in attendance at this conference, siting in an Orthodox cathedral in a mid-sized city in the center of the country, could see fruits of such all around them. 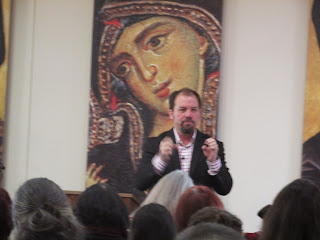 One of the headline speakers was Dr. James K.A. Smith, a scholar and theologian who had recently written a superb book explaining the philosopher Charles Taylor’s monumental work A Secular Age. It was about that book, and Taylor’s fascinating (if convoluted) historical, cultural, and literary excavation of the meaning of secularism in the modern (that is, post 1500 A.D. or so) West, which Smith came to speak about. I was delighted to hear him, because–as some of this blog’s readers may remember–I’ve made rather grandiose promises about reading A Secular Age on more than one occasion in the past, and always failed. Taylor is easily the most insightful and, I think, basically right-thinking contemporary moral and political philosopher I know, and his work has been greatly important to me–but in this case, I really appreciated having someone smart, witty, and provocative explain his ideas to me. The most important concept which of Taylor’s which he unpacked–and also productively complicated–for us is the notion that the emergence over the past half-millennium of the “buffered self” (a notion of individuality that is, in principle at least, resistant to being shaped or determined meaningfully by outside forces which might pour into one, because the core of that individuality is psychologically and morally removed and protected from the larger world) is closely entwined with the collapse of a robust sense of sociality. While Taylor doesn’t claim, and neither did Smith, that these were two entirely distinct or causally related phenomenon, it occurred to me that, if we grant that the festivals and rituals of the pre-modern West existed at least in part to moderate those anti-social pressures generated by the maintenance of the divisions and roles of a religiously defined world, then it seems reasonable to assume that human passions and their supporting understandings are going to always be at least partly self-interested. In which case, perhaps it was the transformation of the social world of the first thousand years of Christendom into something less dependable, more dangerous, and more characterized by divisive opportunities–and here I’m thinking of everything from scientific revolutions to religious wars to the rise of capitalism–which made the desire for “buffering” oneself from the mysteries of the wider world so appealing. Point being, the modern self, mostly closed off to the transcendent but perhaps curiously open to glimmers of it as such can be realized within our “immanent frame” can be persuaded to attend to higher, impersonal goods by simply invoking the promise of tradition: the break with such is perhaps so deeply entwined with ordinary practices both personal and social that it is foolish to imagine that some new apologetic is going to open up atomists to what communion has to offer. Anyway, Smith’s presentation and book are things I’m going to have to think about and write about some more. 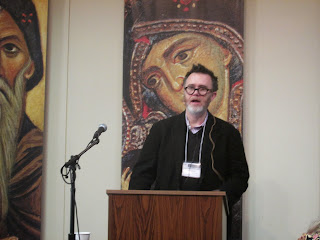 Finally, it was wonderful to see Rod Dreher back in Wichita, and his presentation–both the parts I agreed with, and the parts I didn’t–didn’t at all disappoint. He’s already reflected on some of his thoughts about participating in the Eighth Day Symposium here; let me just focus on something he said about “wonder.”

“Wondering” has two complementary, yet still distinct, connotations. You can wonder about something, and be prompted to ask questions that you normally wouldn’t ask. This was the main focus of Rod’s presentation on the mass media, and how assumptions about certain “myths” end up closing down questions about worrisome or suspicious events or developments that really ought to be asked. I don’t disagree with Rod about this reality at all, though I strongly suspect he and I would disagree somewhat on just what myths really are regent in newsrooms around the country today. But how does that phenomenon relate to another, deeper sense of wonder: that of being struck by the wonder, the mystery, of life? One seems to point towards the seeking of answers to questions, while the other suggests something which is beyond answers entirely.

In his comments, Rod quotes one of the other speakers at the symposium, a Catholic theologian named Bo Bonner (who I’ve met, and I agree: he’s a great, funny guy), who talked about how the most profound truths of the Christian tradition are wild and weird, and that if one is interested in preserving the kind of enchantment which Christianity once provided, in so many different ways, to communities all around the modern West, then it must be allowed to be wild and weird again. I don’t think this is necessarily “weird” in the “keep Austin weird” sense (an attitude which is not entirely foreign to Wichita as well), though there is likely some overlap there; rather, I think it involves living in a tradition so firmly–which, please note, is not the same as living it “confrontationally,” and maybe not even living it “evangelically” either–that you can know and demonstrate through one’s own life choices all the little mysteries and questions and weirdnesses which are inherent to it. We tend to imagine “awe” as involving something grand and mighty, a miracle so imposing as to defy description, but maybe we need to remember that being awed and enchanted is characteristic of the many marvelous idiosyncrasies which may be seen, assuming we can show at least a modicum of charity for ourselves and others, in ordinary, local lived lives. Let’s face it: Erin Doom is, in all likelihood, kind of a weird guy. And so is Rod, and so are you, and so am I. That weirdness, and the pleasant wonder and unexpected questions (“Why does she do that?”) which goes along with it, is not going to be known–at least not in a manner which can bring us, in our places, to contemplate permanent things–if we have just one “myth,” one story, to reductively explain away all our own motivations and hopes and dreams. And neither will it be known if our lives become so transient, so ambitious, so committed to material accomplishments that don’t ever give ourselves (or the structures of our meritocratic economy never allows us) the time or the place to fully live lives that are our own.

Well, Eighth Day has its own weird and wonderful and “wondering-full” little place, here in Wichita, and it’s a blessing and goad and delight to us all. There are bound to be such places, built by such people, where you live as well: small corners of genuine social realization, mysterious happenstances, worthy of wonder. Go out and find them. They’ll be worth your time, I guarantee it.

The Problem of Undertheorized Agrarianism in Most Actually Argued Localism