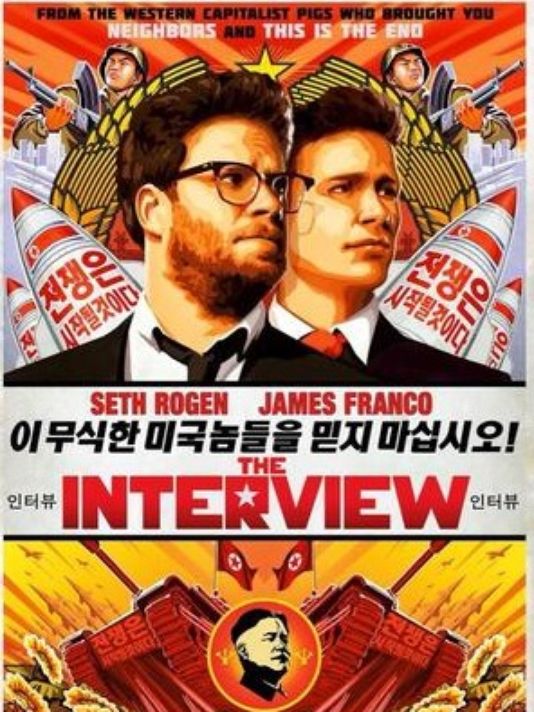 By now you’ve already forgotten last month’s most important celebrity cause, namely the embodiment of freedom of expression known as The Interview. Hollywood has too, of course. It’s so 2014. Even George Clooney, who briefly tried to rally the forces of Tinseltown against the Great Censor, had only “Je suis Charlie” on his lips when accepting some sort of lifetime achievement award/wedding present at the Golden Globes. True, there was Margaret Cho clowning as some sort of North Korean goose-stepper, but clearly now this is all just a laughing matter.

A few weeks ago, though, Kim Jong Un’s cinematic cyber-war seemed deadly serious to many. A not-joking Jimmy Kimmel declared as “un-American” the submissive actions of Japanese multi-national super-corporation Sony and said “people have died for this right” — apparently meaning the right to spend one of Christianity’s holiest days seeing a juvenile tale about a sycophant talk show host sent to assassinate a dictator who in real life is worshiped like a god, puts his people through hell, and just so happens to have nuclear weapons.

Back when this was all we could talk about and most patriotic pundits were deeming it our duty to see the film, the Wall Street Journal’s Joe Morgenstern rightly declared that The Interview was the logical outcome of a movie industry that had dumbed itself “down to a level of trivialization where reality and reckless fantasy were no longer readily distinguishable.”

Our entire culture’s spikes of intensity and forgetfulness over both the superfluous and the truly profound demonstrate that the problem extends far beyond L.A. County. In his classic lament Amusing Ourselves to Death — growing only more timely as the years progress — Neil Postman opens by comparing the dystopian views of George Orwell’s 1984 and Aldous Huxley’s Brave New World:

Orwell warns that we will be overcome by an externally imposed oppression. But in Huxley’s vision, no Big Brother is required to deprive people of their autonomy, maturity, and history. As he saw it, people will come to love their oppression, to adore the technologies that undo their capacities to think.

Korea is where 1984 and Brave New World meet at the DMZ. Those famous images of the peninsula at night say a lot. There’s darkness and Big Brother to the north. Yeonmi Park, a survivor of the brutal regime, found relief in the prophetic pen of Orwell. She says of 1984, “A lot of people think it’s just a novel, just fiction, but it tells the truth. It is the real story.” To the south in Seoul is one of the most glittering, rich and distracted cities in the world. The south has no gulags, but it does have hospitals dedicated to treating thousands for addictions to the internet and video games.

National Review describes Shin Dong-hyuk as assessing “that South Koreans as a whole are too occupied with getting and spending in their prosperous, stressful, competitive society to be concerned the fate of North Koreans.” Shin is an escapee from the north who was recently back in the news for having modified the geography and timing of events in Escape from Camp 14.  His torturers are likely happy to see the “Defector Changes Story” headlines, but his scars are still there. Amidst our myriad distractions few of us knew anything of his ghastly tale in the first place.

Our own online dependency brought us to another touch point between the visions of Orwell and Huxley: Pyongyang meets La-La Land. Oceania’s Bureau 121 sailed the Pacific in nanoseconds to test our addiction to soma. Sadly, the suffering people of North Korea were mostly forgotten as the beautiful people vented in defense of the freedom to express oneself inanely before quickly moving on. As Postman perceptively noted,

The world has proven big enough and connected enough to show both of these prophets correct. In North Korea, the Dear Leader runs a vicious police state. Here in what’s left of the West, our own leaders urge us to run to the malls after 9/11, to the theaters on Christmas Day, and to the newsstand for a Charlie Hebdo cartoon, all so the terrorists won’t win. Yes, cyber-attacks are serious, and we rightly want to honor the fallen and uphold our freedoms. Yet, when freedom produces wisdom like this, a different kind of terrible victory seems far too close to being in the bag.

John Murdock was as an attorney in Washington, D.C. for over a decade and now writes from a farmhouse in Texas.  Assuming it has not been hacked, his work is catalogued at johnmurdock.org.

The Bar Jester Goes Off (While Putatively Responding to Matt Stewart)