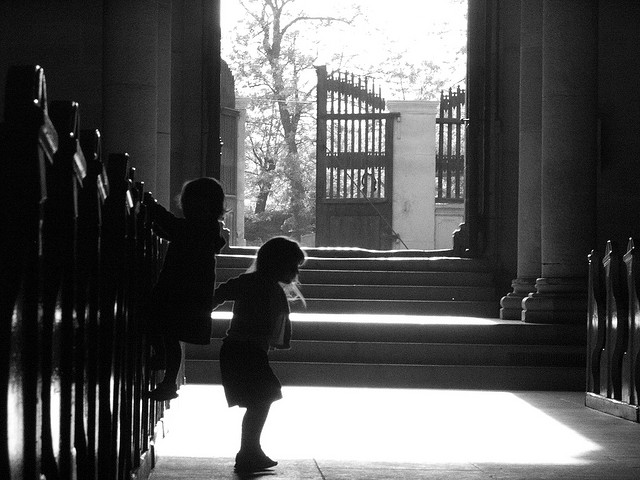 Louisville, Kentucky.  I don’t know what kind of things your children learn in church, but over the last several years mine have been introduced to the terms “pole dancing,” “harlot,” “cutting,” “sleeping around,” and given a rather vivid insight into the struggles for mental chastity among a set of 75-year-old men. I was driving somewhere three or four years ago when my youngest asked me what was the meaning of a long word the guest pastor (I will call him Dr. Jones) had used the previous Sunday, a word she couldn’t remember but which began with a P. For a few minutes I was stumped, and only as we reconstructed his sermon did I realize what she meant. I suppose it is good, in a way, that I got to be the one defining the word “prostitution” for my daughter, but at the time I felt pretty miserable about it.

We live in an intemperate culture, and while we coddle our children in all kinds of ways, we don’t cut them any slack when it comes to strong language and sexual knowledge. The only truly obscene word in English today is “nigger.” Everything else is pretty much common currency. We yell insults and flip the bird to other drivers, we play the dirty lyrics of Top 40 stations in our own cars, and when we’re down by five some of us will angrily tell a 12-year-old ball player—sometimes our own son, at times someone else’s–that he’s playing like: you know.

Contrary to the pose I am pleased to maintain in public, I am not truly Victorian. I wish I were; under the pressure of my college education, decades of cultural erosion and my own failings, my standards have slipped. I never expected to keep my children innocent for very long. For a while I was in a battle for “just a little longer,” and now that the dike has long been broken I am just trying to prevent a constant flood of trash. And I am failing—even in church.

All of these frank sermons I mentioned—from four different preachers—came from Southern Baptists, but I think Baptists are not alone in this weakness. I suspect this is a scourge of all the evangelical churches, and I suspect it is creeping into the more starched mainline church sermons, too, as it has infected our public talk in so many other places. Hence the seemingly obvious solution, to give up on the Southern Baptist Convention and go somewhere else, may not get me to safer ground, and in any case I have other people to consider.

I find it remarkable, though, that it is not the difference in theology that is making Sunday mornings difficult (not being a Baptist myself), but the difference in cultural standards. I can understand why someone would regard communion as a symbolic gesture, or insist on a full-immersion believer’s baptism, even if I don’t agree with either view. But I cannot for the life of me understand how a grown man can have the stomach to look out on a congregation full of young teenagers and calmly say the word “whore.” Or how a preacher could come up to a mother afterward, as one did to me, and tell her that she should not have taken her sixth-grade daughter (and her daughter’s guest) out of the sanctuary during his description of pole dancing, because that meant the girls failed to hear from him that pole dancing was wrong.

There is a laudable desire in the evangelical churches to confront head-on the sins our culture is especially prone to, and indeed this is true of all churches that take seriously the concept of sin, whatever sins they choose to emphasize. But frankness in front of a mixed audience is a mistake. Some churches will preach in favor of the traditional Christian view on sexuality, and some will preach against it, but what they have in common is their unfortunate desire to preach about it and in some detail, regardless of the first graders in the fourth row.

Actually, the first graders might be all right. This kind of talk will generally go over their heads. But a nine- or ten- or eleven-year -old is an inquiring mind that wants to know, and he will link clue to clue till the day comes when he knows exactly what the pastor means by Sodom and Gomorrah—till Sodom-and-Gomorrah is no longer a fuzzy metaphor for wrongdoing, but a clear mental picture and a visualized fact.

Evangelical churches take seriously the admonition “that all Scripture is written for our instruction,” and I cannot quarrel with that in principle. But I must quarrel with it in practice. If we are not willing to take into account time and place and audience, not willing to follow the Biblical admonition to bridle our tongues, so that we speak in euphemisms that adults will understand but children will not, then we are not responsibly considering how we may be affecting minds which are sinful, certainly—children are not innocent of sin—but which have not imagined certain sins yet.

Dr. Jones, who mentioned prostitution (twice, as an aside unnecessary to his main argument), is not a stupid man and he is a leader in his denomination. But obtuseness will make a hash of the best intelligence. He was preaching to the choir, and not to the choir’s grandchildren, though adults shouldn’t be reminded of such things lightly, either, since our own self-control is highly imperfect, and since a warning is necessarily a reminder that can itself become a snare. Also, like many of us, Dr. Jones is on the web a lot, and in his case on TV, and I think none of us is really good enough to prevail against the barrage of so many screens, in the angry and sexualized and brutalized culture that engulfs us at the least opportunity, however much we may otherwise try to keep ourselves and our families both civil and civilized.

That Sunday Dr. Jones preached from the second half of Luke 17, with his main text being, “Wheresoever the body is, thither will the eagles be gathered together.” The beginning of that chapter contains another verse: “It is impossible but that offences will come: but woe unto him, through whom they come! It were better for him that a millstone were hanged about his neck, and he cast into the sea, than that he should offend one of these little ones.” The “little ones” of that passage are those young in Christ, rather than specifically children, but it is still a hard text for modern parents to hear. Dr. Jones in the pulpit, reaching for an illustration, and I in the pew, trying to stay there, are both guilty.

The Theological Need for Mediation: Considerations from Alexis de Tocqueville