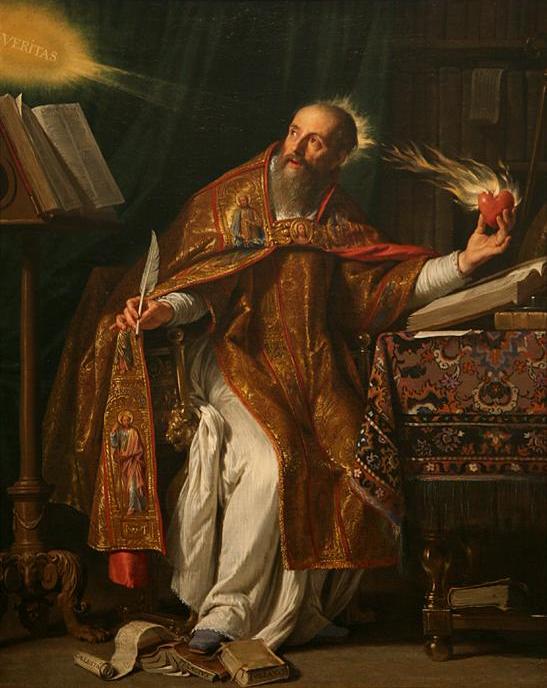 In my previous two posts, I wrote about how the ideas of periagoge and phronesis could be incorporated into the multiversity’s understanding of itself: an emphasis on how to learn and pursue truth by adopting dialectics, theoretical insight, and practical knowledge for students, faculty, and administrators. Although these ideas run contrary to the management-speak of the multiversity, they do possess the potential for appealing to broad sections of the public, unlike, as is the topic of today’s post, Augustine’s theological thought. The initial obstacle that a thinker like Augustine, or an Aquinas or Calvin, poses to the multiversity is that their beliefs are religiously-informed. Certainly someone like Augustine would have a place at a religious college or university, but it is less clear what role and contribution he could make, if any, to the public multiversity.

If religion is tolerated at all in the multiversity, it is usually under the guise of religious studies programs, student organizations, and off-campus partnerships with local religious bodies for non-offensive but great publicity projects, such as social justice or therapeutic empowerment. To advocate for a particular religious perspective in the multiversity, as Augustine unquestionably would have, is tantamount to unemployment or expulsion, for it would require discrimination and possibly even coercion against those who do not share your beliefs. Of course, institutions like BYU, Patrick Henry, or some small, faithful Catholic college hidden in the back woods devotedly follow their religious tenets, but a religiously-informed, discriminatory perspective cannot be accepted at the multiversity – and probably for good reason, as the multiversity is a public institution and therefore must abide by current public values, such as tolerance and respect for everyone.

For the most part, these public values like tolerance and respect yield a positive benefit, although, admittedly, they are sometimes abused to promote political correctness and similar ideological agendas. I understand that some people may take issue with this: those who think the multiversity should be demolished; that, in general, public education is godless; or, even more broadly, that liberalism is just plain awful. However, the reality is that the multiversity (and liberalism) is not going to disappear anytime soon in spite of the countless tirades and jeremiads against it. Given these restrictions that reality has imposed upon us, the question still remains what does Augustine bring to the table for today’s multiversity?

One of the great themes we discover in Augustine’s writings is amare: we are defined by what we love, whether it is God, our family, or our desire to dominate. In The Confessions Augustine writes about the changing objects of his love, from his desire for glory to eventually God itself, as a type of conversion similar to Plato’s periagoge. This conversion to truth is an internal experience that requires you to reflect upon the various encounters in your life as to which ones gave you lasting meaning and which ones did not: which objects of love had sustained you and which objects were only of fleeting joy? For the multiversity, what should be the objects of its love? For the student it would be the search for answers to the questions of vocation and identity; for faculty it would be the cultivation of students and the serious pursuit of scholarship; and for the administrator it would be the creation of the conditions where truth could be pursued by students and faculty in both its theoretical and practical forms. Rather than being distracted by the latest fads of flipping the classroom or empowering the student, the multiversity should singularly focus all of its attention on the object of its love which is how to learn to pursue the truth.

Augustine actually addresses this question about how to learn in his dialogue, On the Teacher, where he assists Adeodatus in learning abstract concepts like symbols and signs. By appealing to his son to reflect upon his own soul, Augustine helps lead his son away from the empirical observation of external objects to explore the interiority of his mind for truth and then ultimately to transcend it by contemplating God. Once Adeodatus reaches this point, he can return to the world of the mundane and encounter them from this new perspective of his interior life. Now persuading students, faculty, and administrators to contemplate God would be a futile, if not outright mocked, task at the multiversity, but it is possible to make a case for pursuing truth. And if Augustine is correct, that truth equates with God, it might be possible that the multiversity would eventually reach that point that Augustine claims, but it could not start from there, as he would have us.

For, as Augustine observes, to understand or contemplate truth ultimately requires the individual to experience it for him or herself. This “inner teacher,” about which Augustine writes, is the exploration of our own interiority to look for truth; thus, making learning an exercise of one of our own mind. The most that a teacher can do is prompt the student to reflect upon his or her own interiority to discover wherein truth resides. Like Socrates’ demonstration of the slave boy in Plato’s Meno, Augustine explains cognitive achievements by postulating unobservable experiences within students: they have inborn knowledge or access to such knowledge through a meditator like Christ. For the multiversity, the point is less about the role of Christ than considering the paradigm of interior knowledge. This theory runs contrary to the predominant multiversity’s model of knowledge-transfer, where the teacher transfers knowledge to the student in reading, writing, and, for some tenured professors, videos. Teaching for Augustine is ultimately a Socratic enterprise of dialectics to elicit reflection, discussion, and debate about what constitutes truth for both the individual and the community.

Although the student must reflect upon his or her own interiority to pursue truth, he or she paradoxically requires a community to accomplish this undertaking. In his various works – like Of the Works of the Monks, The City of God, On Christian Doctrine – Augustine writes about the need for community to learn because he believes that dialogue is the best way, imitating the triune God with the corresponding human, cognitive activities of memory, understanding, and will. To learn within a community not only prevents the solipsism of one’s own reflection of one’s interiority, as they will be discussed, examined, and contested with others, but it also promotes virtues like friendship and justice that demands the other. It is because of these differences among individuals – or to use the multiversity’s word, diversity – that makes these virtues possible.

Conceding that the multiversity’s practice of diversity today often leads to fragmentation, discord, and even extortion, it doesn’t necessarily have to, if the community is united by its love of the same object. As Augustine describes in exhausting detail in The City of God, communities are formed by what they love; and for the multiversity, it can be formed and therefore made whole by having its disparate communities love the same object, such as the pursuit of truth. If this were the case, then students, faculty, administrators, staff, alumni, and the public would be able to form a genuine community while, at the same time, allow a diversity of ways to pursue their love and reap the benefits of friendship and virtue.

These assorted ways to pursue truth would require the multiversity to scale its communities according to the proper roles, functions, and effectiveness required for each task. The multiversity would be forced to answer questions like: Can students authentically learn in large lectures halls and with online avatars? Can faculty truthfully teach by recycling their notes from the 1990s and pursue scholarship by presenting the same conference paper for the past five years? Can administrators accurately know what is transpiring with students and faculty, given the multiple layers of bureaucracy that buffer them from their alleged constituents? The answers to these and other similar questions would first entail them to answer the question “What do you love?” Thus, Augustine’s ideas of amare and interiority can help us try to answer these questions of why and how, and, in the process, show us that learning, in the end, is paradoxically both a personal and communal activity.