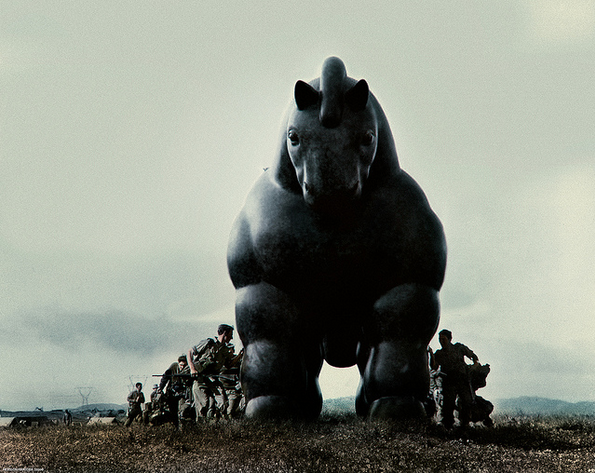 Pop quiz: What ancient Greek legend begins with the kidnapping of Helen of Troy, and ends with Greeks sneaking into Troy inside a hollow wooden horse?

If you said “The Iliad,” you’re wrong, as I discovered reading trying to read it to my daughter. I knew that the story didn’t begin with Helen; that was back-story, as familiar to Homer’s audience as the U.S. Civil War might be to Americans. I also knew the story begins in the tenth and final year of the war.

Until I read ahead, though, I had assumed that the Trojan Horse was the climax of the story; instead, it ends with the death of Hector at the hands of Achilles, his body dragged around the battlements. The Trojan horse part, I discovered, was mentioned in the Homer’s Odyssey and many other sources – most commonly Virgil’s Aeneid, written by Romans perhaps a thousand years later. Nor did the Iliad include the story of Achilles’ heel, or any of the other half-remembered bits of mythology I associated with the epic.

The same is true of many other classic stories of Western culture, I’m discovering as I read some of them for the first time; not only did we not learn them as children, but we misremember what little we know.

By abandoning the classics, we break a line of culture that stretched through civilisation’s rises and falls, prosperity and Dark Ages. The same Greek classic that was once read by Alexander the Great as a child might also have been read by Marcus Aurelius several hundred years later, and by medieval monks several centuries after that, and by Victorian schoolboys centuries still later. The canon gradually expanded – from Romans and Hebrews, French and British – but later works referred to the ones before them in a great conversation through the ages.

Teacher’s journals or education guides from 19th-century America demonstrate an amazing breadth of learning, with even poor farm children learning Shakespeare or Plutarch at young ages. Of course we can’t know how much was absorbed, but it’s telling that children’s guides from that era are often beyond that of college students today. In teaching my daughter the Iliad I tried to use Rev. Alfred Church’s 1892 children’s version (“for Boys and Girls … in Simple Language.”), but even I find it requires more concentration than the iGadget world allows us.

Like most modern Americans, I never read such cultural standards as a child, and knew only Disney versions or other bits of hand-me-down pop-culture flotsam. I found a few ancient stories in my childhood – Pandora, Baucis and Philemon, and of course the Bible – and that’s a few more than my peers did. Most of the canon, though, I had to approach as an adult, and some I’m only reading now as I home-school – or “after-school” – my daughter.

Even the versions I read, though, had strayed far from their original meaning. Take the story of Pandora’s Box, for example; in every simplified version you read, Pandora lifts the lid from the box – actually a jar, but we’ll let that slide – and accidentally releases all the troubles of mankind. When the curses scattered, however, one thing remained, that left the box last: Hope.

I had always assumed, as in the illustration of my children’s book, that hope was a tiny angel that came out after all the demons had gone to plague the world, and the lesson was clear: you might have all the troubles of the world, but at least you have hope, and that makes it all better.

I told my daughter that this was how people today saw the story, and she saw right through it. “That’s a terrible lesson!” she said. “Hope doesn’t make anything better – and if it’s false hope, it makes everything worse.”

Sure enough, that, I think, was Hesiod’s intent three thousand years ago. Accepting what you can change and what you can’t – “and the wisdom to tell the difference,” as the saying goes – is difficult for all of us, and misplaced hope can interfere with that. Hesiod’s intent, I believe, was that hope was the worst of all the troubles – if he had done his own illustrations, he might have drawn it as a monster with the others.

Even familiar Bible stories like Noah linger misunderstood in our cultural memory. When the world was flooded and he needed to see where land was, Noah let ravens loose and they never returned – sadly, our Sunday-school teachers told us. Only when he let the dove loose, and it returned with the olive branch, did he realise there was a place for them to land.

It was only later, studying medieval history, that I realised I had misjudged the ravens; they bore the good news. Vikings and other seafarers commonly brought ravens with them, knowing they could not land on water and had to find solid ground; when they did not return, they knew land was near.

More modern classics also become jumbled or misrepresented in pop culture, so Gulliver’s Travelsbecomes a children’s comedy, and Romeo and Juliet a love story. Modern audiences, I suspect, find ancient stories difficult because we look for what we think we’re supposed to see, when the real story is far more instructive.

Sometimes, of course, we must view the stories with different values than their creators intended; we are not, for example, Bronze Age warlords. At one point in the Iliad, Agamemnon boasted that his men wanted to keep fighting, weary as they were from ten years of brutal combat. He tested them by suggesting they get in their ships and return to their families, and the men cheered and ran for the ships, and we feel for the men, not the king.

Homer might have meant this as suspense, a moment when the heroes’ spirits falter. To my daughter, this scene played like a Bugs Bunny cartoon, and she acted it out like one — Agamemnon running after his men, shouting “NO! NO! Bad warriors! Get back here!”

When Agamemnon stops the men from running away, moreover, one man – a lame hunchback and “man of the people” — speaks against the king, and Odysseus silences him with a punch. Everything about the man – his underdog status, his handicaps, his populist defiance of power, cues us to take his side; you can see him played by John Qualen in a Frank Capra film, beaten down by the plutocrats and becoming a martyr for the people. In Homer, however, there’s not a trace of that – he clearly meant his audience to cheer for Odysseus. My daughter found it hard to sympathise with any of the Greek heroes after that.

Reading these classics to a pre-teen girl, moreover, brings another problem into focus. Almost all characters, in every ancient story, are male – and not just in epics engraved in cuneiform. FromGilgamesh and The Iliad up to Treasure Island and The Hobbit, hardly a story in history would pass the Bechdel Test.

Even more seriously, such stories bring home how much of human existence has been sadly based on rape. The Trojan War began with the rape of Helen and ends with the rape of Cassandra, the Iliad opens with Agamemnon kidnapping the daughter of a priest of Apollo, other Greeks rape other women, and so on. The same thing is true of most ancient texts – just the first few chapters of Genesis alone have straight rape, gay rape, gang rape and many other things I’ve skipped over rather than talk about with my ten-year-old. I wonder about all the children who grew up reading the Good Book without someone to walk them through it.

I only filter some of this for her, which means I discuss things with my daughter that would shock many people – she knows that much of history was brutal and selfish, and that humans return to that state easily. All the more reason, I say, to look at what these characters actually do and try to understand them – but don’t be afraid to judge them with our moral compass.

She takes this and runs with it; when Paris kidnaps Helen, The Girl is appropriately outraged, and is pleased to see him finally meet his end. Instead of lingering, as Homer does, on the conflicts between Agamemnon and Achilles over possession of yet another kidnapped girl, I talk about how Cassandra reacted violently when Paris brought Helen into the city, outraged at her brother’s actions. My daughter naturally sees Cassandra as the heroine and moral compass of the story, a perception only enhanced by the fact that she is a.) a girl, b.) is right, and c.) no one believes her.

If Cassandra, in The Girl’s interpretation, is basically Hermione from Harry Potter, then Paris is Draco – Draco Malfoy, not the actual Draco from later in Greek history — cruel on the surface, but cowardly underneath. When Agamemnon challenges Paris to a duel to end the war, she acts out the part of Paris, preening in front of his men, the ladies of the city sighing as he passes.

When he sees Agamemnon, however, Paris turns tail, and Hector, the brother who did not desire the war yet faithfully protected his city, beats Paris up in front of his men.

“Good for Hector!” she said. “Why didn’t Paris’ men rise up and kick him out, if he was such a bad leader?”

The same reason people don’t do that today, I said. If one person stands up, they can be punished or killed, like the hunchback who stood up to Agamemnon. It’s in everyone’s short-term interest to attack such a person, even if it’s in their long-term interest to stand with him against the leaders. It’s called a collective action problem, like the tragedy of the commons.

“It’s like Spartacus, isn’t it?” she asked. “But he got some people to follow him, for a while.”

You’re right, I said – people can rise up against bad leaders, but it usually means following other leaders, rebels who can also be brutal, and aren’t usually successful.

“What if they all decided to create a democracy?” she asked.

There were none yet in the world, I said – but right here, among these people, is where it would start. And you look at all the times that people in this story are speaking against their leaders, like that hunchback. To me, I tell her, it feels like the seeds were already being planted.

I don’t know what a classicist would think of this, but I wouldn’t teach the canon any other way. My daughter finds the characters maddening, and the ends tragic, and she argues against everything they do. I encourage her to argue, and not just accept their actions passively — but I also try to get her to put herself in their sandals, and learn from their mistakes. And so we gently argue, night after night — and we slowly find ourselves part of a great conversation that began long before us, and that we hope will continue for many to come.