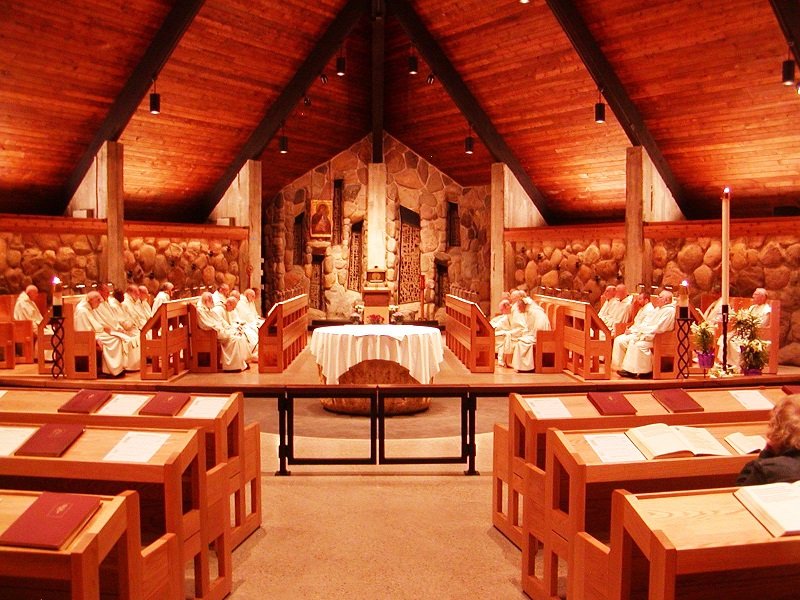 Recently, our local Trappist Monastery, the Abbey of the Genesee, unveiled a renovation of the sanctuary of the Abbey church. To the shock of some — those who often claim to have their ‘finger on the pulse’ — the remodel did not include large, hanging screens or an auditorium-like worship space. Nor did the Vespers service I attended in the new space have the highly-expected new monk praise band. Some would argue that they — the monks — aren’t concerned about staying true to the direction of history, a “direction” that seems to equate progress with the ubiquity of people facing screens and stages. In the face of this allegation, I presume the brothers would plead guilty as charged. As a group, they’ve decided instead to continue to work out the mystery of human community without distractions or easy compromises, and to work it out face-to-face.

Along these lines, I often think of the late writer Brigid Brophy and her book Mozart the Dramatist and the growing relevance of an insight in her chapter “Women and Opera,” an insight she developed but borrowed in germinal form from Freud. She expressed it like this:

“this remarkable phenomenon among girl ‘fans’ of a public figure: the seemingly obvious and natural course would be for each girl to detest all the other rivals to her infatuation; instead of which the rivals all seek solidarity with one another in a group.”

Seemingly so simple, I first came across this book and this Freudian observation while in graduate school, studying theology, over 20 years ago, but I have never forgotten it. In the book, which is about the literary acumen found in Mozart’s operas and had nothing to do with my classes, Brophy elaborates on the uncanny power of the stage, the screen and the proscenium arch to make a ‘sort-of’ peace between people or groups who would otherwise be feuding or in competition. We take it for granted, but when we think about it deeply, it strikes one as weird and yet telling. Two girls, it will be noticed, who would normally be in oppositon with one another, (up to, and including, violence), over the crush they each have on a guy in their school become fast friends once you take that same guy and put him up on a stage, on a screen or across a proscenium arch and actually bond because of their joint infatuation.

Brophy (a Brit) calls the power of this phenomenon “Glamour,” wittily reminding us that it’s a term that has its origins in the practice of witchcraft where it denotes a spell placed on somebody to make them seem like something they are not. “Glamour in a performer,” she adds, “makes a socializing effect among the audience; it turns the audience into a miniature tribe or nation … whose internal control is a microcosm of social control. [Italics mine].” And this phenomenon doesn’t just apply to teenage girls, I’ll have you know. It’s operative at the NFL game and at the strip club, in front of the idiot box and, a bit ironically perhaps, and back to my point, in churches.

Now please don’t tune out because you see Freud mentioned. Brophy uses Freud — in this case, Freud’s Group Psychology and the Analysis of the Ego — in the way that Christopher Lasch used Freud: as a source for a growing collection of insights about society and culture with a facility for understanding those forces that tend to keep people or groups in political or cultural passivity and infancy. A society or culture can get older, the Russian philosopher Nikolai Berdyaev once said, without actually becoming more mature. Without forms of analysis that look at maturation, to put it quite simply, we’re lost.

In my work with young adults and the Catholic Church lo these many years, I’ve probably gone back to that insight about the power of glamour, (in my head, as I lost the actual book in lending it out over 15 years ago and just recently borrowed it from the library), more than I have the official liturgical documents of the Church in trying to come to terms with the megachurch phenomenon, and also to come to terms with the counterfeits to authentic community that are offered in abundance throughout our culture to young people who seem so often to be search of authentic community. This phenomenon, as it’s found in many churches, was successful parodied a few years ago in this video that creatively pokes fun at the development of “glamour,” (though not calling it by that name), in worship settings. It went semi-viral and the word “contempervent” was used in some circles to call “halt,” or to give a name to the excesses in this direction. But they — the excesses — continue apace because, like the manipulative practices of fraternity hazing, they work!

Look at some of Brophy’s other insights about the power of the stage, screen and arch and you’ll see our society in a microcosm and its central propensity to keep people in infancy or adolescence:

–(POLITICS) In the nursery there are rivalries and a hierarchy of age, but let the nursery door open and a parent enter, and these vanish; vis-a’-vis the parent, older and younger children are solidified into a social group, ‘the children’, through which runs a democratic character.

–(CINEMA) The invention of the cinema, civilization’s widest disseminator of glamour really did make the players as large in comparison with the audience as parents are in comparison with children and it completed the remoteness and unattainableness of the performer by letting the audience know that anyone who did storm the screen would find nothing but a shadow to embrace. The cinema might have been invented to illustrate what psycho-analysis meant by the image of a parent.

–(GENDER) Because it re-establishes the infantile situation, the theatre, which has already democratized the audience, by abolishing its social hierarchy, can also abolish its division into men and women—and even its hidden division into heterosexuals and homosexuals.

Excessive use of screens and stages, then, not only infantilizes the ‘audience’ and puts them into a ‘glamour’-induced trance, it severely diminishes our perception of gender! That’s certainly a relevant insight. Guy Debord was right. We live in a “Society of Spectacle” where “authentic social life is replaced by representation.”

This topic is way too big for a short article but let me wrap up by returning to the Abbey. A few weeks ago, I took 20 students over there who are part of a mandatory Freshman writing course at SUNY Geneseo on a subject chosen by the instructor, (My subject? “Rooted and Local: The Thought of Wendell Berry”). Our host monk and guest lecturer, though familiar with Berry’s work, wanted to use his time with the students to show a reverse-image, as it were, of Berry’s portrayal of authentic community, (the “membership”), since many the students don’t have the good fortune hail from a meaningful “membership” themselves, or at least one they can discern.

Using short stories written by Raymond Carver and Andre Dubus, he led us through landscapes of loss and wreckage, where in one case, in a rehab center, community in front of a passivity-inducing TV screen was contrasted with community formed on more convivial front porch, and in another story, (centering on divorce), movie theaters where the dad obsessively took his children on ‘his days’ were contrasted with the authentic community forming power of a shared beach view and beach blanket. And in these stories the two images images of hearth and table loomed in the background as the truly iconic symbols of family and authentic community.

Now, obviously, none of this can or should be seen as black and white, but I believe there are useful terms and contrasts, (“screen vs. face” or “stage vs. table/hearth”, to name a few), against which people can view changes, choices and developments and discuss them intelligently. In my own tradition, for example, there is no longer an altar rail in most churches, (akin to a proscenium arch) and so, in a sense, this is a move that could theoretically work beneficially to the diminishment of that spectatorial aspect Brophy calls attention to. Priests, too, in many parishes, don’t seem quite as ‘elevated’ as they once did, and worship is still centered on a table and not a stage, and for that I am grateful, though it seems like a combination of the two in most parishes (Again, none of this is purely black and white).

Many Catholic leaders and parishes, however, see those developments as negative and are working in the opposite direction, to restore glamour, by using screens and turning priests into rock stars, ’cause it works’ and it’s the direction of history in a society centered around the spectacle. My view is that tools of the theatre might have been useful for many centuries post-Constantine and post-Edict of Milan when most everyone was nominally Christian but, in today’s culture, when Christians don’t even have the tacit support of the government in a stance against godless communism, which they even somewhat recently enjoyed, the truer path lies in in the direction of a day predicted by Ivan Illich when, “I foresee the face-to-face meeting of families around a table, rather than the impersonal attendance of a crowd around an altar.”

Pope Francis has just written, as the opening lines of his Papal Bull on the Year of Mercy “Jesus Christ is the face of the Father’s mercy. These words might well sum up the mystery of the Christian faith.” I like that very much and so, hence, anything diminishes the importance of the face is highly suspect in my eyes. The great Orthodox theologian Olivier Clement even declared that “Christianity is the religion of faces.” In light of that, and in light of the coercive power of glamour, screen and stage, I believe in a preferential option in worship against stages and screens and in favor of tables and faces. Stages and screens, after all, are both characterized as having a creepy “reverse side” (see below) where in one case, performers wait off-stage in the shadows or where, in the other, there’s a wall or darkness or wires or computer chips or something else.

As a touchstone of sorts for these conversations, or maybe for a prayer before parish or church council meetings that discuss the use of screens and stages in worship, I suggest, for reflection, the following snippit from the famous homily of Pseudo-Macarius:

The soul that has been judged worthy to share in the Spirit in his light, and has been illumined by the splendour of his ineffable glory becomes all light, all face, all eye, and nο part of it remains any longer that is not filled with spiritual eyes and light. That means that it has nο longer anything dark about it but is wholly Spirit and light. It is full of eyes, nο longer having a reverse side but showing a face all round, for the indescribable beauty of Christ’s glory and light have come to dwell in it. Ιn the same way as the sun is the same all round and does not have any reverse side or lower part but is wholly and completely resplendent with its light … so the soul that has been illumined with the ineffable beauty and the glorious brightness of Christ’s face and has been filled with the Holy Spirit, the soul that has been found worthy to become the dwelling and the temple of God, is all eye, all light, all face, all glory and all Spirit, since Christ is adorning it in this way, moving it, directing it, upholding it and guiding it, thus enlightening it and embellishing it with spiritual beauty.