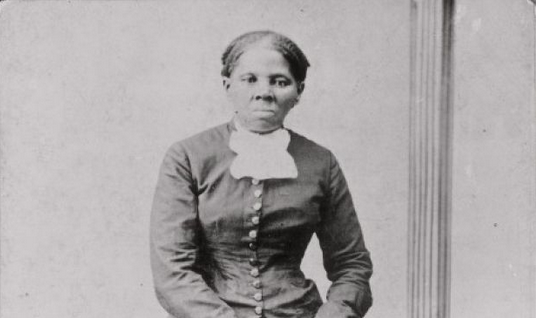 BURNED-OVER DISTRICT, NY – I’m overjoyed that the phiz of that bastard Alexander Hamilton, the father of corporate capitalism, will be removed from the $10 bill he has for so long defaced with his smug mug. I wholeheartedly second my colleague J. Arthur Bloom’s nomination of the Montana pacifist Jeannette Rankin as Hamilton’s replacement. (Though I dissent from Jordan’s dismissal of Michael Lind, who is well worth reading.) The heir apparent to the obverse of the ten spot, Harriet Tubman, is worthy, too, not least because her final earthly home was down the road in Auburn, a sister city of the New York-Penn League.

If I may be permitted to play the degrees of separation game, my good friend Henry W. Clune was pals with the novelist Samuel Hopkins Adams, who as a boy knew “Aunt Harriet” well. What follows is a piece taken from my new book Poetry Night at the Ballpark and Other Scenes from an Alternative America (FPR Books), for which you are invited to fork over a few Hamiltons:

Araminta Ross, later known as Harriet Tubman and best remembered as Moses, the preternaturally wise conductor who never lost a passenger on the Underground Railroad, is perhaps the historical personage most familiar to the latest generation of American schoolchildren. The bare facts of her life—escape from slavery, daring raids to rescue other bondsmen from servitude, untimely fits of narcolepsy, service as a Union spy in South Carolina—are extraordinary, but most textbooks are too rigid and unimaginative to convey any sense of what Harriet Tubman was really like. If only a good novelist had known her, the reader murmurs. Well it just so happens….

Tubman made her home in Auburn, New York, on property that had belonged to Lincoln’s Secretary of State and her ardent admirer, William Seward. And it was in Auburn, a generation removed from the War, that Harriet met a boy named Samuel Hopkins Adams, the fortunate son of a notably cultured Upstate family.

Young Adams had inherited an ample sense of self-worth from his grandsires, who were the subject of Adams’s best book, Grandfather Stories (1955). As Adams told the tale, a “visiting New England lady” once accosted his paternal grandfather:

“Adams? Adams? Do you claim kinship with the Boston Adamses?”

“There is a Boston branch, I believe,” he answered cautiously.

“I refer to the Presidential Adamses,” the lady said haughtily.

“Ah! I was personally acquainted with the Honorable John Quincy Adams. A very respectable gentleman. He may well have been a connection of our line, though, being no brag-hard, he would naturally not press the claim.”

The New York Sam Adams, too, would grow into a crusty character. When the forceful old boy was a forceful young boy, his days were not infrequently occupied by visits from “Aunt Harriet” Tubman. Sam’s great-aunt, Sarah Hopkins Bradford, had written a pair of books about Tubman, and it was because of Aunt Harriet that young Sam and his friends played slaves and overseers rather than cowboys and Indians.

Harriet Tubman would walk the two miles to Adams’s maternal grandfather’s house. Grandfather Hopkins would ask, “Harriet Tubman, will you sing for my grandchildren?” and after a modest demurral Harriet “would clap her stringy hands upon her bony knees, rock her powerful frame, snap her eyes,” and sing “Go Down, Moses” in the same great baritone in which she once sang her song of deliverance to escaping slaves following the North Star.

The children, being children, would ask impertinent questions (“Show us your mark, Aunt Harriet”) and she would reveal the scars left by the whip.

Harriet Beecher Stowe’s dramatics left Harriet Tubman unimpressed: “When our grandmother once took her to a matinee of Uncle Tom’s Cabin,” Adams recalled, “she expressed approval of the theme but was critical of Eliza’s escape across the ice, declaring the affair ill-managed and intimating that she could have handled it better.”

“‘Bloodhoun’s!’ she said disdainfully, eyeing the two disconsolate mastiffs who appeared in the role. ‘I nevah made no min’ of bloodhoun’s.'” (Adams transcribed Tubman’s remarks in her rich dialect, and while it may strike our ears as awkwardly anachronistic he also captures her in a way that later writers, hamstrung by p.c. etiquette, do not.)

Although her date of birth remains a mystery, Harriet Tubman lived close to if not beyond 90 years. She was a fixture about town, and often was seen sweeping clean the front yard of the Harriet Tubman Home, which her respectful neighbors in Auburn had endowed as a residence for indigent African Americans.

Tubman, one of the great heroines of our history, deserves better than mummification in dry textbooks. We are lucky that Samuel Hopkins Adams, the young novelist-to-be, never forgot her sly wit and superabundant humanity. When Sam and his cousins asked her, “Did you kill lots of people?” Aunt Harriet disappointed them by answering no.

“Why not?” they wondered.

“Whuffoh I want to kill folks?” replied Harriet Tubman. “Nobody nevah kill me.”

(Originally published in The American Enterprise, 2006)