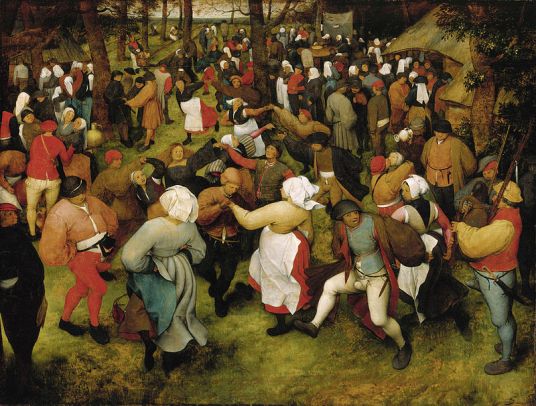 “Men whose justice is straight know neither hunger nor ruin, but amid feasts enjoy the yield of their labors.”
Hesiod, Works and Days

Festivity. The word brings longing to the heart; we find ourselves wondering where it can be found. In describing a flourishing society Hesiod points especially to the festivity of the just.

Festivity is one of the three Greek ‘Graces,’ along with Splendor and Joy. Hesiod associates each of these with those who are just and law-abiding. Not only does justice set humans apart from the rest of the animal world, it is the source of blessing and only true happiness.

Does Hesiod think that the unjust really can’t have feasts? Perhaps the operating distinction is between parties and feasts. Only the just can have true festivity. Who are these just? Their justice is called ‘straight’—they bend not to the desire for ill-gotten gains or trivial, passing pleasures. For them work itself is a blessing, ordered not to greed but to household needs and honest living with neighbors.

The unjust may indeed have much stuff, and throw parties that turn heads, fill bellies, and massage egos. But the just have feasts, where they enjoy the yield of their own labors, knowing it to be the fruit of their putting first things first, rendering what is due to God and man. A scarcity of material resources does not dampen the festivity springing from the straightness of justice, a festivity that unites people, rendering a joy that lingers.

Many seek to satisfy themselves with the products of their work; only the just have feasts where they rejoice in the fruits of their labors.

Hesiod (8th century B.C.) was a Greek contemporary of Homer, and likewise an epic poet. His Works and Days sketches the year-round work on a homestead. It also describes various characteristics of both a troubled time period—Hesiod’s own, and those of a golden age. After three weeks treating the former, this is the second of three Wednesday Quotes devoted to the characteristics of a golden age.

Re-membering the Body: A Review of What It Means to Be Human