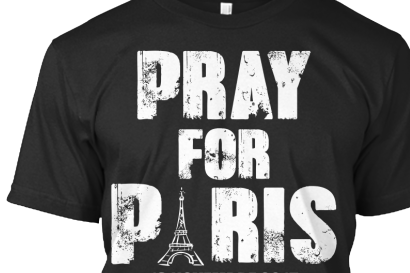 Earlier this year, after the Charlie Hebdo shootings, I reflected on the conversations that may or may not ensue from the changing of a facebook profile picture.  As my facebook news feed in the last few days has changed into a wash of the modern French flag (the tricolor) I’ve reflected further on our need, as a consumer-driven culture, to “brand” disaster.

Clearly the French didn’t start the #prayforparis trend – as it’s an English phrase.  #jesuischarlie started up so quickly because the attack was directed at a specific target for a specific reason.  The French reacted, in their own language, to a value that they saw being attacked (so-called “freedom of speech”).  That hasn’t been the case here in the last few days.  Despite the attack in January and the train attack of this summer, the French (and those of us who live here) were caught entirely off guard.

For many of us, the first reaction was shock and a sort of numbness.  Some, like me, wanted to fight for a normal continuation of life and wanted to keep plans for a group of us to have dinner and see a movie on the weekend.  All the cinemas closed, however, as did many of our favorite restaurants.  I hosted drinks at my house, and we all shared our experiences from the previous 48 hours.

Others have taken comfort in visiting the scenes of tragedy in order to take photos or leave flowers or candles.  Or they’ve gone to Place de Republique to occasionally sing La Marseillaise with fellow strangers.

And yet others, both here and outside of France, have taken to changing their Facebook profile photo to show “solidarity” with the people of France.  Now, as some might guess from my Catholic and royalist roots, I won’t have anything to do with that tricolor flag or that horrible national anthem celebrating murder and the death of so many innocents.  But I don’t expect most to know the history of France, especially given that it has been written by the revolutionary victors.  One doesn’t have to change one’s photo to a rainbow or a tricolor to engage with others – but it is the laziest and easiest way.

It also begs the question, what about Lebanon?  Why were no #prayforlebanon hashtags trending worldwide, to note the horrific murders and bombing that happened just the day before, on the 12th?  The easy answer is that “that kind of thing” (read: bombing and murders) happens all the time in that part of the world, so there’s no need to mention it – whereas Paris, for better or worse, represents a particular place of fantasy for some, and having that place ripped apart by violence truly does touch many around the world.  France can be a polarizing nation in the modern era, but it doesn’t change its cultural significance, which is still felt.  Many have referenced 9/11 to capture the sentiment they are feeling.

The not-so-easy answer is that even in branding disaster, we can have fatigue, so we have to pick the things we care about.  If we were “in solidarity with” every horrific thing that happened we would be numb – as horrible things happen multiple times a day, every day.

As an aside it has been interesting to note many atheists pushing back against #prayforparis by stating, “we’ve had enough religion already (in this disaster).”  I have to say it’s always humorous to see people push back against something they don’t believe in anyway.  The more relevant point to put to the hashtaggers might be, “who are you praying to and what are you praying for?” That is, if they are actually praying, and not just copying and pasting a picture or hashtag into their social media “life.”

When I lived in the Uni

ted States I remember being bemused by the “Boston Strong” reaction to the bombings at the Marathon there in April 2013.  You could buy t-shirts, wristbands, and even participate in fundraising.  And just a number of weeks ago we saw “Stillwater Strong” in reaction to what seemed to be a random accident at an American football game.  Social media has taken the quiet tragedies of daily life and turned them into causes.  They are not causes.  They are terrible things that have happened to people who, by and large, have private lives.  Thrusting a camera into their faces and a microphone close to their mouths is not about helping them in the grieving process.  It’s about allowing us to voyeuristically involve ourselves in their griefs – but absent any sacrifice on our part other than a vague and ephemeral notion of sadness.

We don’t limit ourselves to disasters either.  The “ice bucket challenge” of two summers ago gave everyone a chance to pretend they cared about a disease they had never heard of up to that point and surely haven’t thought of much since after they posted the video of their icy bath.  Whole articles were written about the “game change” in fundraising.  Two years on, we see it for what it was: a variation on a viral video.

For those of us who have experienced true and real grief, we know that it knocks the wind out of us.  We are paralyzed.  We forget about everything else except what we are feeling in that moment and in the days that follow.   Perhaps we don’t answer the phone or emails/texts.  Part of us wants to move on and have a semblance of normalcy.  “It’ll be good for me to stay busy,” we tell ourselves, but we know that the only way to deal with this grief, this horror, this tragedy, is to reflect quietly within ourselves.  To think about what this means to us personally, both in this moment and in eternity, as we know and understand it. And that takes time, not a hashtag.

I was overwhelmed and touched by all the friends and acquaintances who joined my family in reaching out to me to make sure that I was fine in the time after the attack happened.  I spent a couple hours briefly responding to each of the messages of solicitude, smiling at so many who thought of me.  But after the smiles and the recollections, I was left with that feeling of disorientation that happens when one’s reality is challenged.  Last night I went to see a movie and almost every metro station and major monument had increased police and military presence.  It was a bit like being on a military base, actually.  You feel safe, and buffered from danger.  But it doesn’t change the feeling of dread.  On Saturday night some of us were out walking and a set of sirens went off and some police cars raced past us.  Every single person on the street stopped, followed the cars with their eyes, and then rushed to a nearby bar to look at the televisions to see if there was something happening.  One of my employees told me two nights ago that a police raid happened nearby a bar she was in and people was so afraid that every person in the bar fell to the ground and started crying and screaming.

Things are getting back to normal.  But emotions are still raw.  And what’s needed isn’t branding, catchy slogans, or colorfully lit up monuments.  Nor, indeed, is the sensationalist media message that Paris is now a warzone to be avoided by anyone who was planning to visit (I’ve had many conversations in the last 3 days assuring people that it is, indeed, still safe to visit).  What is needed is the time and space to reflect quietly within ourselves.  But that’s not hashtaggable or sellable, so I don’t expect to see it anytime soon.

Stephen Heiner is an entrepreneur and writer living in Paris.  He writes at his own blog, The American in Paris, as well as for the Fleming Foundation.

The Family Frog Kisses a Toad