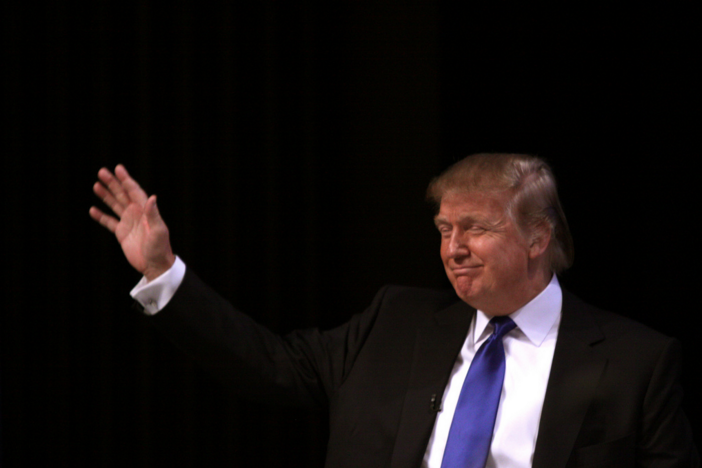 The Republican candidates for president would have us believe that they are strong, manly men who would stand up to Putin, destroy daesh, contain Iran, and generally “restore” America’s power throughout the world.

But they cannot even stand up to Donald Trump. The men who purport to show no fear in the face of terrorist bombs live in abject terror of a Trump tweet. Those who promise to out-maneuver a resurgent Russia with nuclear weapons cannot even find a way around a New York real estate magnate with bad hair. The most fawning and obsequious of them, the man who vowed find out if “sand can glow in the dark,” bought himself only a temporary respite by his appeasement, but is now sinking in the polls. The appeasement Cruz denounces in foreign relations was the cornerstone of his relations with Trump. He counted on Trump to destroy his rivals, which he has, and now he is destroying Cruz. What goes around comes around.

The fact that the Republican elites are all baffled by these results indicates how divorced they are from the American people. The globalist Republicans are totally disconnected from their nationalistic base. They expected a repeat of McCain and Romney, fending off the populists with a few dog whistles about abortion, or immigrants, or gay marriage while advancing the corporate agenda their financiers paid them for. They anointed Jeb Bush with the holy oil of endless money and now have nothing to show for their investment. Whatever one thinks of Trump, he has destroyed the credibility of the party elites. Trump realized, perhaps intuitively, that what the people are really concerned about is of no real concern to their “leaders.” And the fact that he has pandered to popular concerns without offering any real solutions does not mean that real solutions are not available; they are just not available to the men who run the Party.

They cannot out-talk Trump because they do not know the language he is talking. His words might as well be written in cuneiform; those who run cannot read the writing on the wall. But in the end, they will deal with Trump, because Trump understands the Art of the Deal (mankind’s second greatest book, so we are told) the art of selling out your friends to make a profit with your enemies. They despise the reptilian Cruz, not without reason, but feel they can make a deal with The Donald. And The Donald will become The Nominee. It is now all but inevitable.

The picture is no better from the democratic side. The bumbling Hillary Clinton is likewise suffering the fate of the tone-deaf. As Secretary of State, she left a trail of disaster through the world, and particularly the Middle East, and is performing the same service for her own campaign. The Republicans have not been able to lay a glove on her, and their 11-hour interrogation only made her stronger. It’s the only thing that has. What they could not do to her she is doing to herself. The Republicans concentrated on Benghazi while ignoring the total disaster that is Libya.

The same service she provided to Libya was also provided to the Ukraine and to Syria. The endless search for moderates to arm in the cause of democracy continues without realizing that armed moderates quickly become jihadi terrorists. And she wants us to believe that the $125 million she and her husband have received from the banks for “speaking fees” will have no impact on how she governs. For all I know, she is right; she might give the banks the same service for free, just as her husband did by ending the Glass-Steagall Act and deregulating derivatives. On the whole, not a very inspiring story.

No one could have predicted a credible challenge from an aging, Jewish “democratic socialist,” but the disconnect of the Democratic elites from their working-class base has made this a possibility. The Democratic elites are no less globalist then their Republican counterparts, and if anything more open and evangelical about it. One party might make the world safe for democracy and the other make it safe for commerce, but either will make it toxic for workers, families, and communities.

Sanders calls the party back to its working class and populist roots, and his success, such as it is, is as mystifying to the Democratic elites as Trump’s is to the Republicans. Nevertheless, Clinton will triumph over Sanders in the end, and indeed the end for Sanders may come sooner rather than later. New Hampshire and perhaps Iowa could be his only victories. “Democratic socialism” is simply a bridge too far, even if its actual content is not that much different from Eisenhower’s liberalism.

Conventional wisdom has Hillary crushing The Donald, but then conventional wisdom did not credit The Donald in the first place. Hillary doesn’t inspire while inspiration is Trump’s stock in trade. Trump can read the writing on the wall and make a deal with it, while Hillary is pretty much limited to reading the New York Times, when she reads at all.

So, we are guaranteed some “interesting times,” in the sense of the ancient Chinese curse. But one thing is sure: those who pander to populism will not deliver on their promises, and have little understanding of our real problems. Those most likely to win are those least competent to rule. And in age of rising powers, cultural upheaval, and economic crises, intelligent, prudential rule will be a survival skill.

We will not get it; the writing is on the wall.