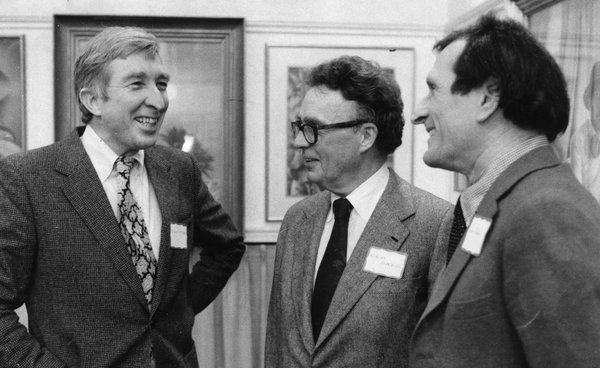 Harry “Rabbit” Angstrom, a former high school basketball star with a spiritual yearning and an outsized libido, may be both John Updike’s most famous and most despised literary character. But Rabbit is also something of a George Babbit for the second half of the twentieth-century. Throughout four novels that span from 1960 to 1990 (plus an additional postmortem novella tracking his children’s progress in 2001), Rabbit reacted to private crises in the midst of his country’s cultural upheavals. Updike once described Rabbit as his “ticket to the America all around me.” Rabbit was “ever the loyal citizen. God he can doubt, but not America.”

Rabbit took that nationalist faith throughout his different lovers, houses, and jobs. Whatever his line of work, from selling kitchen gadgets in the late Fifties to Toyotas in the late Eighties (including his son’s entrance into the health and social services sector in the late Nineties), Rabbit loved and fiercely defended his country. In the midst of the cultural turmoil of the late Sixties he fears that strange “birds were taking over the garden. Rabbit knows it’s his garden and that’s why he’s put a flag decal on the back window of the Falcon even though Janice says it’s corny and fascist.”

Rabbit’s patriotism was accompanied by nostalgia, racism, sexism, and a general anti-cosmopolitanism to the extent that, were Updike around to give us another installment, it would probably involve at least one Trump rally.

Wouldn’t Rabbit, after years of bemoaning the changing racial demographic and economic fortunes of his hometown (a thinly veiled Reading, PA), look to Trump to give meaning to his years of growing resentment? His once magical childhood city would still be crumbling around him, drugs and divorce had worn down his family, the country’s loss of loyalty would likely still irk. Oh to be great again!

To ask whether or not Rabbit Angstrom would vote for Trump opens up a question not many journalists are asking. Not, Who are these Trump voters? Or, How did they get here? Not even, What are they afraid of and why? Updike’s novels are more curious about what drives Rabbit’s imperturbable sense of joy alongside his consistent dissatisfaction. His question is not a who, or how, or why, but a what: What does he love?

Rabbit’s travails throughout the novels are grounded in his loves; whether he is running or hiding or returning, he acts according to his old high school basketball coach’s advice: “Do what the heart commands. The heart is our only guide.” That inner command propels him blindly forward as, in Updike’s words, “his heart makes in darkness a motion of love.” In his final drive south, as a heart attack approaches, “his heart becomes his companion. He listens to it, tries to decipher its messages.”

And what does his heart tell him to love? Beautiful things. Good things. Rabbit tends to love them indiscriminately, though, in the hectic rush of impulse. Lacking discipline, he often he fails to love well, but sometimes he succeeds. The arc of a basketball floating toward the hoop was one of the things he loved responsibly enough to work at. The blossoming pear trees lining the street in his hometown and the dreamy songs on the radio brought him peace. Even as he and his wife aged, a glimpse of her thighs would still arouse him. Rabbit loved the sensations of living, the bizarre, unimpeachable particularity of American life. Sidewalks and pies and sunshine — they were worth savoring in themselves. For Rabbit, life in its fullest flourishing was what happened in the quotidian moments of middle-class striving.

Which is part of why Rabbit tended to agree with his father’s politics, and voted Democratic. Earl Angstrom once praised Medicare and the moon landing in the same paean to the Democrats’ beneficent protection: “They called LBJ every name in the book but believe me he did a lot of good for the little man. Wherever he went wrong, it was his big heart betrayed him. These pretty boys in the sky right now, Nixon’ll hog the credit but it was the Democrats put ‘em there, it’s been the same story ever since I can remember, ever since Wilson – the Republicans don’t do a thing for the little man.”

It’s an old American story, that little man, whether it’s Democrats or Republicans who happen to be looking out for him. But in Updike’s rendering the little man is defined by the substantial splendor of the life he loves. His simmering resentment is no match for the overflowing joy of existence. Rabbit once memorably exulted that America was “the happiest fucking country the world has ever seen!” His country is a cherished occasion for loving the unrepeatable particularities of his own life. Whether or not he would have voted for Trump, Rabbit longed to love the good gift of living where he was, when he was, how he was. His political instincts stemmed from a fathomless ache of guilty gratitude.