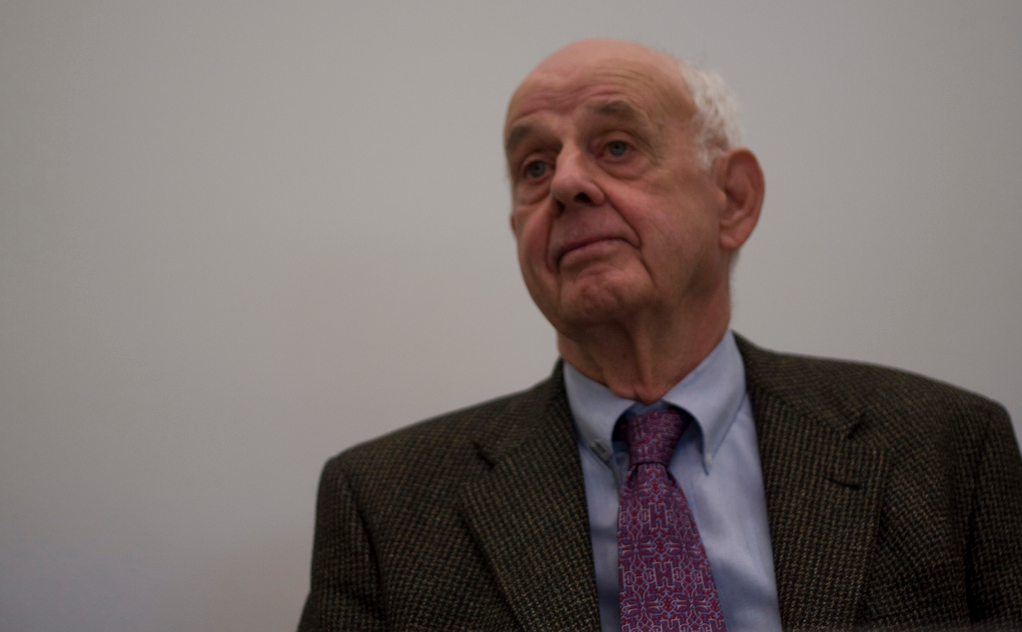 Given the unpopular and uncompromising stands that Wendell Berry takes, it’s only natural that many readers fiercely disagree with him. Some of these disagreements are simply matters of preference. As one of his stories has it, “It is perhaps impossible for a person living unhappily with a flush toilet to imagine a person living happily without one.” Other disagreements are more substantive and not easily resolved. But any disagreement with Berry should begin with a fair reading of his work—otherwise one is simply battling a straw man. In this respect, I am afraid that even though Tamara Hill Murphy agrees with much of Berry’s vision, her recent essay in Plough Quarterly misrepresents his fiction, claiming that his stories view rural life too nostalgically, glossing over its violence and racism and brokenness.

When Murphy published an earlier version of this same argument, I suggested via Twitter (which is of course the perfect medium for discussing Wendell Berry) that she was overlooking many counterexamples where Port William does indeed suffer from its members’ anger, alcoholism, infidelities, and abuse. But the fact that she’s still making the same argument — and that Rod Dreher, another appreciative and thoughtful reader of Berry, largely agrees with her case — suggests that it may be worthwhile to point out the seamier side of Port William’s history. Because my colleague Jack Baker and I are currently editing a collection of essays on Berry’s fiction, I’ve recently been spending a lot of time in his stories, and these portray a much more multifaceted view of rural life than Murphy’s essay would lead one to believe.

First, however, let me quote what I take to be Murphy’s thesis about why she is often frustrated while reading Berry’s fiction: “The dissonance with Berry occurs when I consider other family tales buried under the agrarian beauty. These are stories of shattered relationships, addiction, job loss, abandonment, mental illness, and unspoken violations that seem to separate my kinfolk from the clans in Port William. In Berry’s fictional village, readers occasionally witness felonies, infidelity, drunken brawls, and tragic deaths, but all of them seem to be told in a dusky, warming light.” She goes on to describe how her own experiences in rural communities exposed her to a deep pain and brokenness that she doesn’t see in Port William.

In particular, Murphy accuses Berry of airbrushing life before the introduction of tractors and technology: “Port Williams’ characters serve as a mouthpiece for an author bemoaning every generation to come along since the Depression who dared to purchase produce from a supermarket or drive their car across the river to see what was on the other side.” Yet Port William’s characters often disagree with one another, so they cannot collectively serve as Berry’s mouthpiece (and if there is an autobiographical character in Port William, it is Andy Catlett, not Jayber Crow, whom Murphy later identifies with Berry himself).

Furthermore, Port William’s most nostalgic inhabitants are some of its least admirable. Take, for example, Roger Merchant. Roger is Mat Feltner’s cousin, and he lives a drunken life on what’s left of his father’s holdings. While Roger imagines his father to have been a “cultivated and enlightened gentleman farmer,” Mat knows the reality was far different: “The truth about old man Griffith Merchant is that he lived on his land like a blight, troubled only by the slowness with which it could be converted into cash.” Yet Roger’s rosy view of his father is part of how he justifies to himself his own life of dissolute leisure, a life whose waste and irresponsibility become a burden to his tenants and family members.

Roger, like many of the alcoholics in Port William, never repents or reforms, but at least he escapes the violence that regularly punctuates life here. A World Lost begins with the murder of Andy Catlett’s alcoholic Uncle Andrew, and over the rest of the book, Andy strives to make sense of his uncle’s life and death. Andrew’s drunkenness and infidelity and carelessness caused great pain to his family, and he and his wife share blame for their strained marriage. As Andy’s mother asks, “‘Did your Aunt Judith have so many health problems because your Uncle Andrew drank and ran around with other women, or did your Uncle Andrew drink and run around with other women because your Aunt Judith had so many health problems?’” Yet in spite of his many failings, Andrew was a kind uncle to his young namesake, and his wife and family genuinely mourn his murder.

Andy’s father, in fact, almost kills the man who shot Andrew (and who then served only two years in prison). This sort of extrajudicial killing is a common feature of Port William life, particularly in its early days. In “Pray Without Ceasing” Andy pieces together the story of another murder in his family’s history — his great-grandfather Ben Feltner was murdered by a drunken Thad Coulter, who confessed to the sheriff, “I’ve killed the best friend I’ve ever had.” Jack Beecham has to forcibly prevent Ben’s son Mat from avenging his father’s murder. This intimate violence — threatening always to spill over into ongoing feuds — is a prominent part of Port William’s history. The uncle of Mat’s wife Margaret was shot by a Union-sympathizing neighbor on his way to join Confederate forces (see the story “The Girl in the Window”). So Andy’s family history is marked by violence: his great-uncle, his great-grand-father, and his uncle are all murdered by their neighbors. These murders occur in 1860, 1907, and 1944 — Port William’s life before the Depression isn’t exactly an idyllic time of communal harmony.

And murder isn’t the only form of violence that disrupts the community. Racial divisions haunt Andy Catlett: Early Travels and short stories like “Drouth” and “Not a Tear” (Berry probes racism more extensively in The Hidden Wound, a non-fiction book praised by the likes of bell hooks). Marital divisions abound. Jack and Ruth Beecham are a tragically opposed couple, and when Jack has an affair with a neighbor named Rose, he wounds Ruth deeply. Jack is in many ways an exemplary farmer in the Port William community, but his marital failings — and the consequences these have for his and Ruth’s daughter—remain simply tragic. These failings are certainly not narrated in the “dusky, warming light” that Murphy claims saturates Berry’s fiction.

The intergenerational consequences of these failings are portrayed even more clearly in the lives of Nathan and Hannah Coulter. Near the beginning of Nathan Coulter, Berry’s first novel, we hear a story about Nathan’s great-great-grandfather, Jonas Coulter, who had a feud with a neighbor over the boundary between their farms. After “some shooting” on both sides, Jonas’s daughter fell sick and died, and Jonas buried her where he wanted the fence to run: “His wife never would speak to him or even look at him after that; but it settled the argument over the fence.” Nathan’s father, Jarrat, is a similarly hard man. When his wife dies leaving him with two small boys, he withdraws into his grief, and his brother Burley has to step in to care for Jarrat’s sons. One day, when working alongside his now sixteen-year-old son, Jarret bests him in a tobacco cutting contest and father and son come to blows. This image of father and son having a fist-fight in the tobacco field is best summed up in Burley’s words: “It was awful.” Tom left, never to return home, and died in World War II.

Hannah’s childhood isn’t much better. When her mother dies and her father remarries a woman with two boys, Hannah’s life becomes very difficult. In fact, Hannah’s story sounds similar to that of Murphy’s grandmother, who was abandoned when her father marries a new wife who doesn’t like her or her sister. Hannah’s Grandmam protects her somewhat, but Hannah leaves home as soon as she is able and has to make her own way in life. Given her familial history, it’s not surprising that Hannah wanted her children to have “‘a better chance than I had.’” So she and Nathan work hard to send their children off to college. Only when their children move to distant cities and undergo their own familial difficulties does Hannah come to realize that she may have overcompensated for the failures of her upbringing. In other words, while Murphy wonders how Berry can be “willing to overlook the interdependence of generations,” Hannah and Nathan’s lives exemplify the complex, unpredictable way that the failures of ancestors are mediated to future generations.

It is precisely this sense of a complex, multifaceted heritage that Berry’s fiction conveys. Port William’s past is riven with violence, anger, and sin, yet it also carries love, forgiveness, and beauty. This sense of an irreducibly entangled inheritance is poignantly articulated by Dorie Catlett after the funeral of her alcoholic brother. The drunken sprees of Andy’s great-uncle Leonidas Wheeler, known as “Uncle Peach,” cost his family great time and sorrow. They also had real costs for himself; one memorable night he fell asleep in the front yard and lost several toes to frostbite. On the way back from Uncle Peach’s funeral, Andy’s father’s stern sense of justice leads him to amend the preacher’s rosy confidence regarding Uncle Peach’s eternal state: “‘If Uncle Peach is in Heaven,’ Wheeler said, ‘and Lord knows I hope that’s where he is, then grace has lifted a mighty burden, and the preacher ought to have said so.’”

Dorie isn’t impressed with Wheeler’s statement, and in reply she says “one syllable … that Andy later would know had meant at least four things: that his father would have done better to be quiet, that she too had borne that earthly burden and would forever bear it, that Uncle Peach had borne it himself and was loved and forgiven at least by her, and that it was past time for Wheeler to hush. She said, ‘Hmh!’” Dorie Catlett has borne much grief, and her articulate monosyllabic response indicates not that she ignores this pain, but that she seeks forgiveness and wholeness in the midst of a broken world. This search for redemption sounds a lot like the gospel to me.

Patriotic Work: Wendell Berry’s The Need to be Whole: Patriotism and...