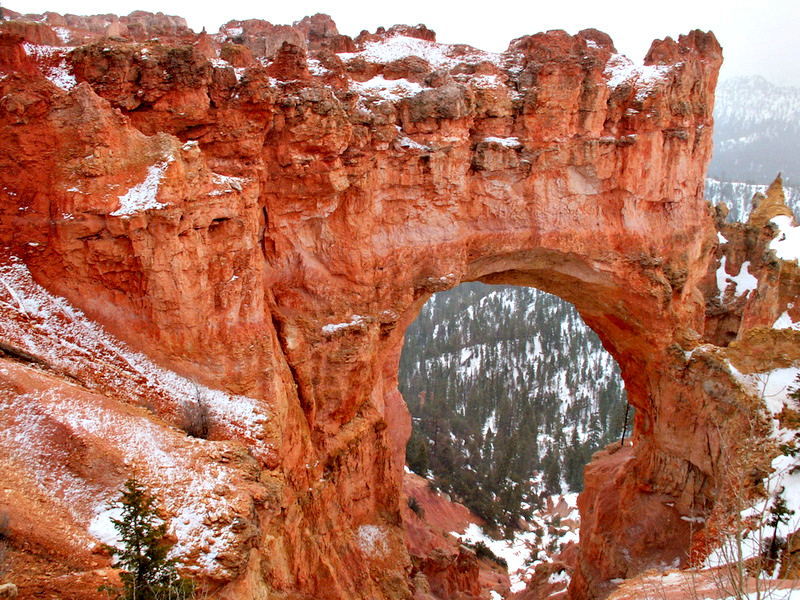 Max Weber never visited the American Southwest, but few theories explain the mass tourism of the region better than his iron cage of disenchantment.

The German sociologist saw the modern world as a lifeless system of technology and bureaucracy that gave up on its spiritual roots. Calculation and efficiency drove the spirits to the hills. “Not summer’s bloom lies ahead of us,” he wrote more than 100 years ago, “but rather a polar night of icy darkness.”

So it makes sense that amid this mechanization the environment has become the last frontier of enchantment — our playground and our church.

The beautiful and the sacred — two things the iron cage cannot replicate — meet together in these junctures of poetic erosion. On weekends and summers, the highways are clogged with campers and SUVs. People from around the world come to touch the rocky wonders they’ve seen so many times in pictures. Throbbing with otherworldly magic are the pink and orange hoodoos of Bryce Canyon, the towering thrones of Zion, the gravitational improbabilities of Arches, and the swirl of stone needles in Canyonlands.

The throb of enchantment is felt in various ways. Aesthetic appreciation stands alongside holy veneration. Indigenous nations gather to protect water and burial grounds from an oil pipeline at Standing Rock Sioux Reservation. Apaches are protesting a mining operation on their sacred space in Arizona. The Obama Administration has designated some two dozen national monuments in his tenure, more than any other president, and may make another in Southeastern Utah, where a coalition of tribes and conservationists are pushing to protect the archeological treasures of the Bears Ears area. Underneath these actions is the fear of loss. Despite many conveniences, progress takes away as much as it gives. This loss means different things to different people. Locals and land-users dread federal absorption and the flattening of their economy. Native tribes and environmentalists worry about cultural dilution and archeological ruin. But the concern of both sides is similar.

I grew up in the middle of this angst, ranching the rims and plains of these very Bears Ears that the tribes and environmentalists want to protect. But something bigger was at work. Refugees from the iron cage flocked to see our gorgeous scenery, but brought some of the bars with them. Little did I realize I was a postcard cowboy, riding in a postcard land. During one cattle roundup, when I was about 12 years old, a tourist got out of her car and took photos of me chasing a calf. My father conversed with her in the French he learned on his Mormon mission and I played up my horsemanship, waving my hat and rising in my stirrups. I even whooped and hollered. My fellow ranch hand said, “You’re gonna be on a magazine cover in Europe.” I remember feeling proud at first, but then fake. I realized I was contributing to the exposure of something sacred. Generations of the family ranch were now open for mass consumption.

In his most reflective moments, my father was as mystical about the land in his own way as Native Americans are in theirs. One summer night, in the shadow of the Bears Ears, our church congregation held a fathers-and-sons camp. The man leading the fireside asked my father to say a few words: “Preston, you’ve spent more time here than any of us. Tell us what this land means to you” I was surprised to hear what came out of his mouth. He paused for a moment, took several breaths, and looked up at the stars. “Before this world was, we existed as spirits and needed to come to a place of testing, a proving ground where our souls could learn the lessons of mortality. The Lord wanted us to love our home so He let us assist him in its creation. He allowed us to choose which parts of the earth to fashion and I chose this mountain as my little stewardship, my sojourn. I wasn’t alone. We made it beautiful enough to keep us here, but not so beautiful we’d never want to leave.” Silent nods of agreement followed. Not everything he said passed strict doctrinal muster, but it explains the spiritual connection he had with the land. The soil he worked with his whole life resounded deeper than time.

Everyone experiences sacred space differently. The native peoples of the Four Corners region have a view of the land scarcely accessible to the modern mind. While the local Anglo communities vigorously embrace the land in their recreation and exploration, the Navajos tread lightly on a living earth, where every rock and plant breathes, has a soul and fits in a universal harmony. This equilibrium is called Hozho, and the smallest misstep can unsettle it. Navajos believe they must reconcile themselves to nature, not make nature reconcile itself to them. During a drought, for instance, they adapt to the dryness instead of praying for rain. Acceptance is better than control. The onslaught of progress, driven by growth and largesse, has not been kind to Hozho. Navajos feel the effects of this imbalance in ways Anglos do not.

Nevertheless, these different life orientations have coexisted for over a century and will continue to do so. The cultural exchange has been difficult, but worth it. Racial and religious diversity is a fact of America, but the promise of peaceful pluralism is realized only when we respect each other’s sacred spaces. History is one long churn of place-making, in which peoples inhabit an area and imprint their beliefs on the physical environment. Sacred geographies overlap, cross borders and communicate with one another across the ravages of time. The ancient Anasazi entranced the land with their dwellings and artifacts before abandoning the region. The Utes and Navajos in turn moved into the Four Corners. Then the Mormon pioneers cut through the canyons to mold a community of saints. And the story is not over.

So who will safeguard this holy land? The National Park Service performs a noble task of preserving the physical space, but, in true modern fashion, routinizes the spiritual space. It monetizes the beautiful and the sacred. The service does what all bureaucracies have to do: measure, partition, contain and build huge visitor centers with vending machines and ice cold drinks. Only after this can a place officially exist. But the more a site is seen the more commercial it becomes. And the more commercial it becomes the less sacred it is. What’s left after traveling through the machinery of mass tastes is a copy of the original. Local governments have a better sense of what the land means. But perhaps the federal route is the only viable option when the clamor for nature reaches critical mass.

I can’t begrudge tourism too much because I’m a tourist myself. A few years ago I drove to Monument Valley, the famous backdrop of John Wayne’s cinematic exploits, to feel the spirit of the place. I stopped at a Navajo jewelry stand and spoke with the vendor. He told me that “Monument Valley is the most photographed place in the world.” I couldn’t tell if the man meant that as a good or bad thing and wondered what he thought about the domestication of his land. Then he said: “In a million years us Navajos will still be here.” It reminded me of something my father said long ago at a public hearing about a proposal to lock down large tracts of our rangeland. “When all of you have visited and gone away,” he stated, straying from his prepared remarks to officials and activists, “we’ll still be here.”

Max Weber told only half the story. He underestimated our native impulses toward the beautiful and the sacred. The bars of modernity are never so tight as to prevent our escape. We choose what kind of world we want to live in. No matter how comfortable our shiny cage becomes, people will always cling to enchantment.

Nathan Nielson is a graduate of St. John’s College