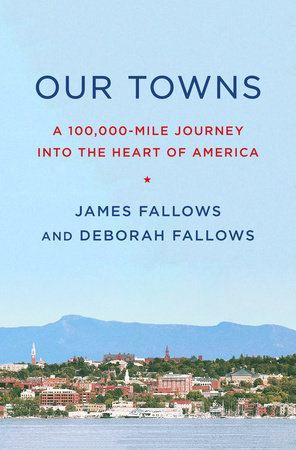 New in The Atlantic is a long–probably a little too long, but stick with the whole thing; it’s worth it–article by journalist James Fallows, “The Reinvention of America.” The article itself is a preview of the new book by James Fallows and his wife Deborah, titled Our Towns: A 100,000-Mile Journey Into the Heart of America, which itself obviously a homage to many other, similar books from throughout American history, from Alexis de Tocqueville to John Steinbeck and more. There is always a degree of conscious myth-making in any of these “discovering America” books, and no doubt this one will be no exception. Still, there is something powerfully appealing in the myth that Fallows commits himself to in this article; it is a hopeful myth, a myth of an America that is re-organizing itself, a little bit at a time, around the connections and engagements which a renewed focus on the local and the regional is allowing to grow in importance and strength. Fallows sees it in libraries and downtowns; he sees it in experiments in public schools and local land conservation efforts; he sees it in the cultural changes and innovations which immigrants bring to communities, and in the level of civic engagement which Americans determined to deal with all the opportunities and challenges which those changes and innovations are exhibiting. America, he insists, is becoming a different, better place–and we out to pay attention.

I’m doubtful of more than a few of the claims with Fallows advances in this essay; I especially find his claim about the spread of talent throughout America’s small towns and mid-sized cities highly suspect, or simply superficial at the very least. But I’m going to read his book, because he’s traveled and talked in a way that I haven’t; I can’t discredit his prognosis for this country without looking into the details of what he’s seen. And if nothing else, he clearly understands one thing very well–that America’s partisan tribalism, driven by technology and individualism and entrenched special interests and the corporate centralization of the news media and a dozen other things, is simply not sufficient for making a judgment about any particular people, or any particular community, and what their strengths or hopes or future may be. His advice towards the end of the article is on point:

Suppose you are skeptical of this fundamental claim, about the ongoing health of local American society. I suggest the following test, and mean it seriously rather than just as a thought experiment: Through the next year, go to half a dozen places that are new to you, and that are not usually covered in the mainstream press. When you get there, don’t ask people about national politics. Trump, Hillary Clinton, the Russians, the Mueller investigation—if it’s on cable news, don’t ask about it. Instead ask about what is happening right now in these places. The schools, the businesses, the downtown, the kind of people moving out and the kind moving in, and how all of this compares with the situation 10 years ago. This process, repeated again and again, led us to the perspective I am presenting here.

I’m going to take his word for it–or at least, take it far enough to read more deeply into what he things he’s discovered about an emerging, more localized America. Read his article, and see if you agree.

Friendship, Hospitality, and the Food System