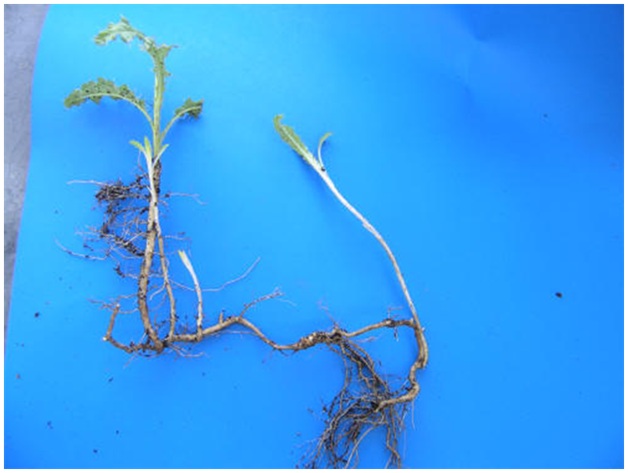 You can scheme to rid the world of evil only if you’ve never tried to rid a garden of Canada thistle.

This and other thoughts occur to me as, under a punishing sun, I engage an invidious invading enemy from the north in dubious battle. For a good five hours, shovel in hand, I attempt to remove thistle and root alike, aware in theory and now also in practice that the highly reticulated root system of the sonofabitching Canada thistle cannot be outwitted or defeated this side of the eschaton. The byzantine root structure of crab grass has nothing on this fall-out from The Fall.

Among the other thoughts:

(1) I wonder if Mr. Big in the sky would be willing to give us a Do-Over and provide a different set of First Parents—on the odds that these two will have it in them to resist the insinuating prevarications of a talking snake.

A talking snake, for God’s sake! Thomas Paine sneered at the account, at the credulity of those who credit it, and at the obtuseness of an exemplary couple not in the least astonished that a serpent was talking to them in their own edenic dialect. And Milton, taking a different route, allowed a bragging Satan to say to his compeers in Pandaemonium (and here I paraphrase), “you ain’t heard the best part: I did it with an apple!” An apple!

So whilst digging up Canada thistle in my garden I think to myself, “this calls for a #*!&ing Do-Over.” And, judging by what I hear coming from a window in the living room—“Daddy! Honestly!”—I have apparently said this aloud.

(2) Michael Pollan is right: given the fact that each little hair along these knotting root canals can become a new-fanged thistle, you may think that you’re eradicating weeds, but in fact you’re merely acting as their midwife. One step forward is four steps back. The secret warren that the fabulously concupiscent rabbit knots and genders in is a chaste and chilly nunnery compared to this brothel of promiscuous weeds.

(3) Why don’t the plants I want—arugula and snap peas, for example—have a native capacity to vanquish this vanquishing weed? My salad greens are Cavs next to these Warrior thistles; they’re like Wolverines before Wildcats. I thin the greens and marvel at their sissy root systems. Canada thistles half as tall have roots four times deeper and more complex. Of course they’re going to out-compete the kale.

(4) What conclusions, if any, can be drawn from the governing principle at work here, namely, that “the world has still / Much good, but much less good than ill,” as the poet said?

It has cost me about five pounds in water weight to remove every trace—every above-ground trace—of the Canada thistle, and now I have begun to wonder whether I should run the tiller down my rows. Won’t this just multiply the invading host and exacerbate my problems? No doubt it will. No doubt every cut thistle root will provide me with four demons where before I had only one, and with eight where before I had only two.

But I resolve to run the tiller—and do. I’m pissed, is why. I have thrown caution and everything like it to the wind. This is like lust in action:

Past reason hunted; and, no sooner had
Past reason hated as a swallowed bait
On purpose laid to make the taker mad;
Mad in pursuit and in possession so.

Pissed at what, though? At God? At the human condition? At Canada? (O Canada, I’ll stand on guard for thee next time. Count on it, Dudley Do-Right.)

I’ll tell you what I’m pissed at: at this “design of darkness to appall,” as another bard put it. Even Pollan, who takes the standard scientific approach to weeds, can’t fend off the nagging irrepressible notion that weeds, by their very nature, raise unscientific questions. He tells us that he

consulted several field guides and botany books hoping to find a workable definition [of weeds]. Instead of one, however, I found dozens, though almost all could be divided into two main camps. “A weed is any plant in the wrong place” fairly summarizes the first camp. The second maintains, essentially, that “a weed is an especially aggressive plant that competes successfully against cultivated plants.” In the first, Emersonian definition, the weed is a human construct; in the second, weeds possess certain inherent traits we do not impose. The metaphysical problem of weeds is not unlike the metaphysical problem of evil: Is it an abiding property of the universe, or an invention of humanity?

I will proffer what I hope is a strict theological answer: evil is both an invention of humanity and henceforth an abiding property of the universe. So long as the Canada thistle exists, so long as it is built into the structure of things, evil is an abiding property of the universe that not even neocons can rid the world of. Weeds are against us, and all of our victories over them, including the temporary Monsanto-cum-Bayer victory, are merely instances of weeds secretly retreating, reconnoitering, and preparing for another more aggressive siege on the citadel of cultivated life.

The tilling now done, the garden looks magnificent: perfect rows of incipient plants unsullied by the Canada thistle, black earth, the promise of a harvest of rocket, which in due course will repose beneath thinly sliced raw beef, itself adorned with capers, black pepper, and salt: Carpaccio!

I know that weeds are faster out of the gate and that, if I can slow them down a bit, I’ll gain some measure of victory as the potatoes and the beans and the coeurs de la romaine grow taller. There’s strength in size.

But I also know that, beneath the loamy tilth, the roots, like the frost at midnight, perform their secret ministry—an evil as opposed to a beneficent ministry. My garden is not free of weeds. It’s free of visible weeds. Below ground sin and death lurk. You can no more rid a garden of weeds than you can rid the world of evil.

(4) The next time either of our clueless political parties provides us with a commander-in-chief, let him (or her) be a seasoned and devoted gardener, a committed pupil in this school of metaphysics. Gardeners, especially those who have gone head-to-head with the Canada thistle, are attuned to the human condition and alert to the property of evil built into the structure of things. They aren’t given over to grand schemes meant to rid the world of what the world can’t be rid of.

No. They tend the garden they’ve got, and then tend it again next year, and again …

But for now I’ve bought some time, so I’m going fishing, an account of which will be given in our very next dispatch.

Food and “the job of getting it there”

A Season of Gluttony