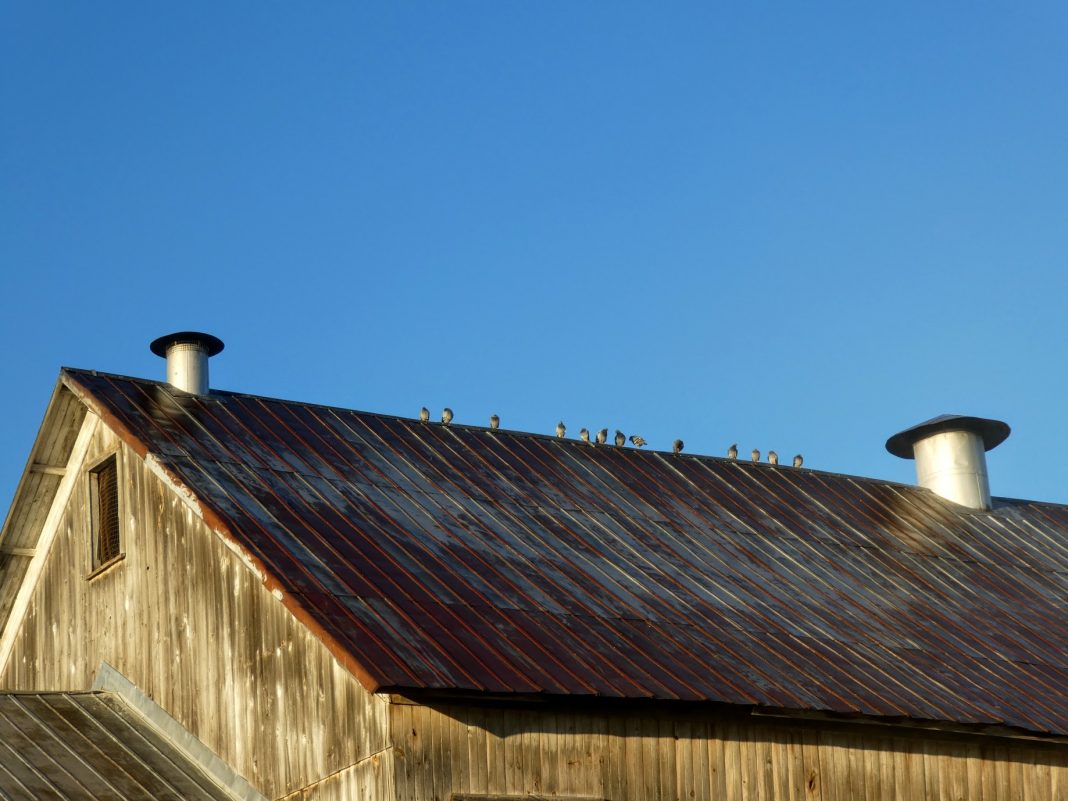 Two autumns ago you couldn’t take a dozen steps without tripping over the decapitated corpse of a pigeon. There’d be one lying on the hard packed gravel of the driveway where it doglegs around the old silo foundation, another atop the mound of bale wrap in the manure shed, and a third in the paws of the dainty, piebald cat who had recently assumed ownership of the farm. (Exactly what she did with all those fine-boned heads is too grisly to describe.) Though she grew fat and slick while the flock diminished, she wasn’t the real cause of the decline. If she caught pigeons at all it was because they had been compromised by illness, and more likely she was content to merely scavenge the victims of the disease’s rapid, unvarying progress; at breakfast the afflicted bird would be listless and capable of only brief flight, by lunch it would be walking in slow, earthbound circles, and dinnertime would find it in slavering feline jaws.

When the ground finally thawed and the apple trees blossomed these survivors began the hard work of repopulation with admirable purpose.

Nothing on the websites of either the Audubon Society or the Cornell Lab of Ornithology suggested that a pigeon pandemic was sweeping through central New York, but the attrition here was extreme. After a couple months only a handful of birds remained, perching still and stoic. Perhaps it was simply their diminished numbers, but rather than the gregarious assembly previously held on the ridge of the barn, theirs was a mournful and silent gathering, and this torpor held through the long, freezing winter that followed. But when the ground finally thawed and the apple trees blossomed these survivors began the hard work of repopulation with admirable purpose.

Pigeons are reputed to be monogamous, and whether or not this is universally true they are models of discretion when compared to rut-mad bucks locking antlers or foppish tom turkeys stalking through the lime green grass of a spring hay field. In one of nature’s great high-stakes wagers a male ruffed grouse will stand upon a fallen log, presumably so the sound will carry farther, and beat a thunderous rhythm in the air, loud enough to thrum from the overgrown orchard atop the gorge all the way to the barnyard. If he’s lucky this ruckus will attract a mate, but it can just as easily draw the attention of a fox or a bobcat or any of another dozen predators with an appetite for upland bird. Pigeons eschew such flashy, dangerous acts of courtship. Instead they couple off and build a nest on some sheltered surface, like the top of a beam on the gable end of the house or any number of places in the barn.

Such quiet domesticity belies their fecundity. Just a few individuals, say, the survivors of a mysterious plague, can double and redouble and double again over the course of a spring and summer. Maybe this exponential growth is supplemented by emigrants from other farms, but the radically egalitarian arrangement of the pigeon family clearly makes for efficient childrearing. Each hen lays two eggs, never more, and the cock takes his turns incubating them. When the squabs hatch both parents nurture them on a rich excretion of the esophageal lining called crop milk, and then both ferry seeds and insects and pilfered hog feed to their growing progeny until they’ve left the nest. The whole tidy process takes about a month, and a mated pair will happily repeat it until the weather stops cooperating.

As is so often the case the young do not share their parents’ discretion. From the eaves their cooing fills the entrance to the old dairy barn’s haymow, and starting about an hour before dawn the hungry calls of a pair of nestlings just outside the bedroom window are noisy enough to make sleep impossible. Like so many birds they rapidly molt several times in early life, and they are remarkably hideous until their final feathering, so perhaps their loud urgency is born of an understandable desire to eat their way out of adolescence as rapidly as possible.

Once they leave the nest the newly fledged are indistinguishable from their parents, at least to the untrained eye. They become a part of a larger band that moves more or less together, though it lacks the elastic unity of most other congregating species: whatever biological apparatus pigeons use for collective navigation must be inferior to that of murmurating starlings or menhaden in a school or sheep in a flock, because a few are always peeling away at the edges, like museum goers bored with a tour group. Watch a flurry rise from the barn and you’re likely to see a handful break off and return to their roost or head into the corn stubble while their peers land on the roadside to fill their gizzards with gravel.

Though they’re usually considered a pest these days, it doesn’t take much imagination to see pigeons as a reliable, self-perpetuating source of protein and fertilizer, and the number and quality of dovecotes throughout Europe and the Middle East suggests this view used to be prevalent. And even if the prospect of rummaging through nests for something a bit more lively than eggs is too macabre, however local and sustainable the resulting meal might be, there are aesthetic reasons to appreciate these birds.

Even the commonest gray birds are gorgeous, though ubiquity makes them easy to overlook.

The ones with black coverts set above stark white flight feathers are flashy, all lines and contrast, while those with milk chocolate heads and cream colored bodies have a softness and warmth that just skirts the overwrought sentiment of their pure white brethren. Even the commonest gray birds are gorgeous, though ubiquity makes them easy to overlook. Their freshly oiled necks have a glistening purple-green iridescence found on the carapaces of some beetles and dragonflies, the feathers of a few other birds, and not much else in nature.

True, there is comedy in a grounded pigeon, regardless of its plumage, walking as it does with a full bosomed strut, bobbing head, and utterly vacant eye, but in flight it becomes glorious. Hear its wings clap three times as it bursts skyward and watch it row through the air. It flies with a purposeful determination similar to that of a migrating goose, as if tugged forward by a string clasped in its beak. But then something diverts its attention–a neighbor turns away, or it realizes it’s hungry–and it brakes and whirls, wings tilting to let the air rush past, feet uncurling at the last moment for a landing that silences the cello hum of an electric line vibrating in the wind.

One winter years before the plague a lone red bird dotted the group of roughly sixty that then lived on the farm. Crimson splashed the gray stillness when the flock flew off of the small metal cupola set in the center of the barn’s roof, and so quiet was the day that the muttering of wings reached from high overhead down to the sagging front porch of the dilapidated Greek revival house. The color, as singular and fixating as a drop of fresh blood on snow, invited a sort of spiritual conjunction. For a few moments the rigidness of bones undergirding the subtle fanning and trimming of feathers and the strain of steel tendons that combined to propel a small body through a frozen freedom of sky became as palpable as a recollected kiss.

Loathing of pigeons is rooted in an increasingly circumscribed imaginative geography, a landscape with no room for beasts that refuse to fit neat categorization.

Such beauty is obscured by pigeons’ reputation for carrying human diseases and for filthiness, but as Colin Jerolmack argues in “How Pigeons Became Rats: The Cultural-Spatial Logic of Problem Animals,” these claims are a baseless veneer used to obscure a deeper discomfort. The true problem is the societal expectation that creatures should appear only in their proper contexts–distant if untamed, tractable if in the home, unseen if intended for food. Loathing of pigeons is rooted in an increasingly circumscribed imaginative geography, a landscape with no room for beasts that refuse to fit neat categorization. Because they hatch, live, and then die mostly in spaces built for humans, without offering much deference or fear, pigeons are unacceptable.

Which is a shame. As a spectacle pigeons may not match the awesome majesty of the Grand Canyon or a breaching whale, but their liminal transgressiveness makes the commonplace sublimity of their swirling flight available to anyone who cares to look. Their ability to thrive alongside human activity without entirely depending on it lets them bring close a wildness that isn’t quite wild. Or, to borrow a thought from Christian Wiman, they present us daily with a life that is not our own. In other words, pigeons are among those rare creatures that can tolerate us with something like grace. 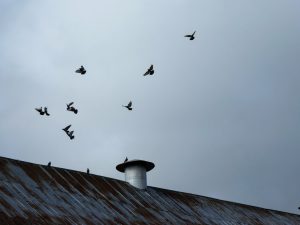 From Dogs to Fur Babies–and Back Again