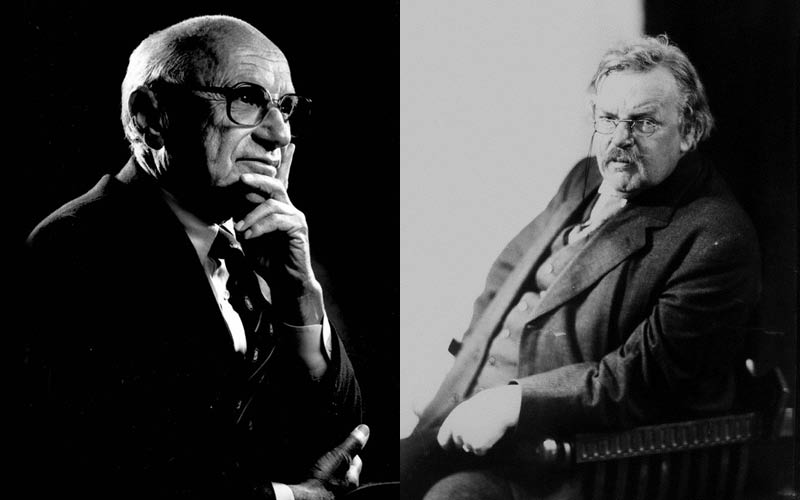 MF: Mr. Chesterton, I know you have not received any training in economics at the University level.  So, I will keep this simple.  The world today, and throughout human history, attests to the fact that countries are made great by allowing individuals to pursue their own personal utilities.  By respecting the ability of the individual to make decisions in his, or her, own best interest.  By allowing those individuals to invest their money as they see fit, to move freely, and, to decide their own state life by free elections.  Countries are made prosperous by allowing individuals to vote with both their pocket books and their ballots.  Democracy and capitalism naturally go together.  They both involve individuals freely choosing a product, service, or way of governance.  When we look at how people move in this world, we will find people moving to capitalist countries.  Not to socialist countries, not to mercantilist or agrarian nations, but technologically industrial capitalistic nations.  As I like to say: “People vote with their feet.”

GKC: Should people vote with their feet?

MF:  The important question is, do they?

GKC:  You’ve already answered that question.  And so I ask, should they?

MF:  People move according to their own personal utilities.  They move in search of a job, a better paying job, an education, a safer community, a lower tax burden, government handouts – I’m sorry to say …

GKC:  Why are you sorry to say that people move for government handouts?

MF:  I’m just trying to describe for you how people decide to move about …

GKC:  But, you are sorry that people move for government handouts, why?

MF: Because, the government is doing those people a disservice by keeping them down.  By subsidizing their not working. By keeping them from flourishing.

MF: I’m sorry to say, that’s how some people move.  I’ve said before, mass undocumented immigration into the US happens, in part, happens because people are moving for the government benefits.  I’m sorry to say.

GKC: But, why are you sorry to say?

MF: Because, that’s not the correct function of government.

GKC: If I’m living in Canada.  I have a job.  But, I find that I can make more living on welfare in the US, would you advise me to move to the US?  I want to vote with my feet by moving to the US for the government check. Should I vote with my feet?

GKC:  Should I?  Ought I?  You’re not advising the government of the US.  You’re advising me.  Should I quit my job in Canada and move to the US so I can get paid not to work?  I want to vote with my feet.

MF:  I would advise you to continue working in Canada.  In the long run, you will live a more fulfilling life working.  If you are a loyal employee and work hard, you will most likely be promoted within the company.  And, in 5 or 10 years’ time, you will be making considerably more money than you would as an American welfare recipient.

GKC:  You say I should stay working in Canada because I’ll be making more money eventually?

GKC:  But, nonetheless, you still think my migratory habits ought to be based on my own selfish interests?

MF:  Indeed, and it is in your best interests to stay working in Canada.

GKC:  What if I get a better job offer in America?

MF: You should take it!

GKC:  What if it’s a government job?

MF: Don’t take it.  You’d only become a part of the problem.

GKC:  What if the job is Governor of Illinois?  Does Illinois not need a governor?

MF:  Yes. I joke. But, in all seriousness, you can’t be elected governor of Illinois because you don’t have residency in Illinois…

GKC:  Yes, I can. Illinois changed their state constitution so they can elect anyone, and they elect me.  Should I take the job?

MF: Well you see, I live in Illinois.  I’m a little conflicted.

MF: You are going to oversee my state’s budget.  All bills passed by the state legislature will land on your desk.

GKC:  Keep in mind, I’m only interested in the job for the high salary.

GKC: If you were advising only me, not the people of your state or state government, what would you advise me to do?

MF: You’re not even an American, so I just do not know if you should …

MF: But you have to understand, Illinois is my home.

GKC: What do you mean?

MF:  I was born there. I live there.  I teach at the University of Chicago. I love my job and my home.

GKC: If you don’t like the new Governor, you can “vote with your feet” and leave.

MF: I think I’d stay and work to see you do not get reelected! (Laughing)

MF: Because Illinois is my home.

GKC:  let’s say, once I get elected, I’m outlawing usury.  Let’s say I’m returning Illinois back to an agro-distributist economic system. Also, I’m abolishing all schools and returning education to the home.

MF: That would be a disaster.  That’s why I’m staying, to undue the trouble you’ve caused. To make sure you don’t get reelected.

GKC:  But, why not leave?  Why not vote with your feet?

MF: Because, you’ve done something bad to my home. And since it’s my home, I want to fix it.  I love my home.

GKC:  And, the bad things that happen to your home are a reason to stay and not leave? Just as much as the good things?

MF: Yes.  How will Illinois ever be made great again if some capitalists don’t stay and kick you out of office!?

GKC:  In summation, Capitalists will not love Illinois because she is great.  Illinois will be great because capitalists had loved her.

MF: Yes indeed!! That’s a witty way of putting it.

GKC: You have no idea how witty it really is.

MF: (laughing heartily). Nah!  It’s capitalism. You need to take my course.  You could learn a lot from me.

GKC: Oh, I already have.

MF: G.K., Let me tell you a funny story. There’s this socialist film maker, Michael Moore. He made a documentary about how great socialism is. He filmed a part of it in Cuba to show how great Cuba is. The important thing to remember is he came back to the U.S.

GKC: You filmed a part of your Free to Choose documentary in Hong Kong, correct?

MF: Yes, I did! In 1978, I visited Hong Kong to showcase their free market principles. Hong Kong is amazing. They have more economic freedom than America.

MF:  Remember this, when push comes to shove, we’re all self-interested.  Look at the socialist George Bernard Shaw.  He wrote all these socialistic plays and made good money off them.  He, like Michael Moore, was a profiteering capitalist who preached socialism.

GKC:  Funny you mention Shaw.  He once told my wife Francis that he feared I wasn’t making enough money to support her and to keep her happy.

MF:  That’s what I’m talking about.  With socialists, their actions and words ultimately betray them.

MF: (ignoring Chesterton’s last comment) so, you watched my Free to Choose series?

MF: Have you read my book Capitalism and Freedom?

MF: Yes. That book is a great place for you to start your education in economics.

GKC: Why is that?

MF: Because, in that book I have a long list of things the government should not be doing.

GKC: How many of those things does the current American government do despite your expressed wishes?

GKC: Sixty years later and the U.S. government does everything you believe it should not be doing? It would seem the last six decades have not gone your way in America.

MF: Well, I did get one thing, a volunteer military.

GKC: “Volunteer” in the sense that one is not coerced to join?

GKC: However, the U.S. military did not arise organically in American civil society. It is funded and run by the U.S. government. It is a government program from start to finish. Hardly a testament to the glory of unrestrained markets.

MF: You’re right. I’m not arguing with that.

GKC: You compiled a list of free market policies in 1957. Sixty years later, the American government hasn’t adopted a single one. Why don’t you vote with your feet and leave?

MF: I want to fix America.

MF: (Friedman thought quietly to himself for a minute) It’s just… my home. I love my home.

GKC: As I wrote in Orthodoxy, “Men did not love Rome because she was great. Rome was great because men had loved her.”

GKC: “This, as a fact, is how cities did grow great. Go back to the darkest roots of civilization and you will find them knotted round some sacred stone or encircling some sacred well. People first paid honor to a spot and afterwards gained glory for it.” In short, they made it their home.

MF: Rome was great because they built roads. That’s where the expression comes from: all roads lead to Rome…

GKC: That’s why so few ever get there.

MF: What do you mean by that?

GKC: As my friend Dale Ahlquist says, “All roads lead to Rome, but they also lead away from Rome. The question is: quo vadis?”

MF: Precisely. Far from keeping people in one place, Rome grew and prospered because they allowed people to move more efficiently.

GKC: The roads allowed them to move soldiers and triumph in war. But, as I’ve written, “the soldier fights, not because he hates what is in front of him, but because he loves what is behind him.” The soldier has a sense of place and…

MF: This is an important point: what moves across the roads, that makes the all the difference. Advances in transportation present new frontiers and new opportunities for friendship…

GKC: “We have pitied the poor nations with frontiers, because a frontier only produces fighting; and now we are trusting to a frontier as the only thing that will produce friendship.”

MF: But, wouldn’t you agree that when two nations engage in free trade, they are far less likely to go to war?

GKC: As a matter of likelihood, I don’t doubt it…

MF: Good! We can achieve a more peaceful world and international friendship if we encourage commerce between all nations. You must agree with that.

MF: But why? When we see one another as producers and consumers in one global market, we no longer see each other as different…

GKC: “Unless you are going deliberately to prevent a thing being good, you cannot prevent it being worth fighting for.”

MF: What do you mean?

MF: But men are selfish. Don’t you agree?

GKC: As long as they have selves, they will be tempted to selfishness. That is why we need the church.

MF: That’s why we need pricing mechanisms and profit incentives which only come from the market.

GKC: Do you think Don John of Austria could have made peace with the Turks in 1571 by trading with them?

GKC: Why do you think he didn’t try that?

MF: That was two centuries before Adam Smith wrote The Wealth of Nations. Don John probably did not know much about Ricardo’s comparative advantage theory or basic laws of supply and demand.

MF: We have international corporations such as Walmart. People move from one country to another. Our conflicts are getting smaller. Developed nations are, generally, getting along. If two nations both have Walmart, McDonalds, and Chase banks they are not likely to go to war. This is good!

GKC: “Take away the supernatural and what remains is unnatural.”