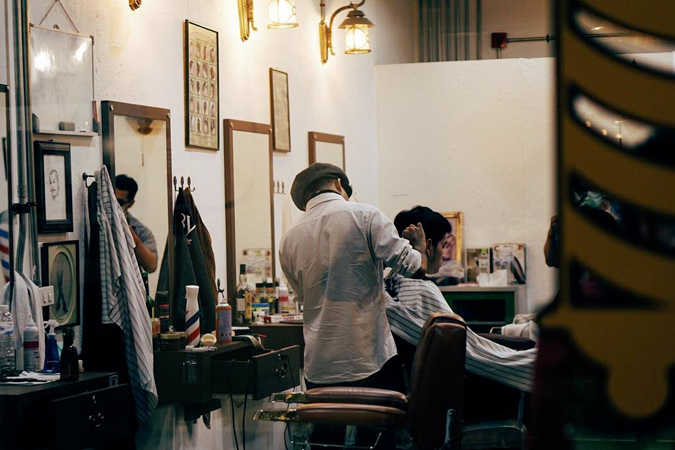 I recently visited a barber in my Virginian hometown whom I had not patronized in more than a year (I’d taken to getting my haircuts during lunch breaks at my job in another nearby town). Entering the establishment, I could tell things had changed — many pictures on the walls were gone, there was a new paint job, and some of the furniture had been rearranged. Yet most surprising was that the former owner of the establishment, a fixture of the community for many years, was gone. A note at the front of the store declared that he had retired and moved to South Carolina. In his place were now two friendly, middle-aged, Korean women.

Yet, despite the superficial changes, it was obvious these entrepreneurial women intended to retain the business’s identity as an old community establishment in continuity with its past. Photos of local little league baseball teams, which the original owner had supported for many years, remained fixed on the walls, presumably meaning the shop would continue to support them. There were still pennants celebrating George Mason University, the local school. Old pieces of barber paraphernalia littered the store, thus retaining its link to its past character and the original owner. I would offer that these Asian-American barbers, of whom I’ve known several in Virginia, represent a laudable approach to integrating with American culture and identity.

This was not the first time I had witnessed a barber shop that represented a certain older, traditional culture of Virginia come into the hands of recent Asian-American immigrants. When I was a child, my parents took me to a barber in Woodbridge. For those unfamiliar with Woodbridge, and Prince William County in which it is located, the town was until recently very Southern. Much of that is now gone, replaced by a combination of middle-class technocrats who commute into D.C. and working-class Latinos. Emblematic of this demographic and political shift, part of the county is now represented by transgender Democrat Danica Roem. But as recently as the 1990s, the county was deeply conservative and proudly Southern — palpably thick accents abounded.

My Woodbridge barber shop was an ancient establishment. It sat in a shopping center with a Southern-rock-blasting pawn shop and a Dixie Bones. The owner, Al, had been the barber for my grandfather, my uncles, and my father, who in the 1980s owned a business down the street. Inside the shop were newspaper clippings from The Washington Post of major Redskins accomplishments, most notably their 1992 Super Bowl victory. Al always had some kind of sport, be it baseball or fishing, on the television. He and my dad would talk hunting. Even after I went to college, I would come back to Al during breaks and trade news on our families.

Then, one time I visited, Al was gone. Sue, a friendly Korean woman, welcomed me into the shop. The frames with Redskin clippings were gone (though, admittedly, the Redskins under the ownership of Daniel Snyder have not managed to inspire many headlines worthy of being hung for proud display). There was no more sports on the television. Al, she told me, had sold her the store and retired. “Well, a friend of Al’s is a friend of mine,” I said, and got my haircut. Sue did retain some sports and American patriotic paraphernalia. She softly played evangelical worship music on her stereo. I complimented her on this, and she offered to give me tapes of her local pastor’s sermons. Center Barber Shop would never be the same with Al gone, but it looked like things weren’t all that different.

Much the same can be said for the barber shop I now usually frequent. All the barbers are first-generation Asians: Vietnamese, Cambodian, or Korean. They are all friendly and professional. The store is covered in Americana bric-à-brac, including American flags and posters of both the Presidents and Vice-Presidents (you ever heard of George M. Dallas, Polk’s VP?). There are homages to the Washington Redskins and Washington Nationals. It is obvious what the owners are trying to communicate: “we are American, this is a patriotic business.”

These three examples of Asian-Americans barbers embody what I would argue is a praiseworthy form of assimilation. They have embraced an American identity, and seek to cater to the American ideals and culture of their clientele. Their goal is to maintain continuity with the past, including the traditional role of the barber shop in the community — a place proud of its local identity and supportive of the community. It is a place where neighbors meet and exchange news. Of course this is not to say that Asian-Americans–or any Americans, for that matter–don’t have a right to run enterprises that are more distinctly representative of the place that was home. It’s a free country, and the contributions of particular immigrant cultures make our country more interesting and complex. All the same, it is most welcome to witness these community shops, inherited from other, retiring barbers, seeking to preserve something good of the past.

America — to some extent spurred on by obnoxious comments by our politicians — is knee-deep in a debate about what constitutes American identity. I would argue that a number of Asian-American barbers in Northern Virginia provide part of the answer. These recent immigrants recognize the blessings and opportunities of their new home. They bear no shame for their inherited nation, despite its many imperfections. Indeed, they promote sports teams with names some consider “racist,” honor “old white men” of American history on their walls, and in many cases have embraced the alleged “oppressor religion” of Christianity. Rather than ridicule America’s past, as if the travesties of Jim Crow nullify the glory of the Constitution, they have gladly and willingly embraced a part of its cultural inheritance as they carry out their chosen profession.

Of course, I miss Al, my old barber from my childhood, as well as the other local barber of my early professional life, both of whom represent a certain Northern Virginia identity that has largely evaporated. I mourn the loss of that sub-culture, in which I was raised and to which I owe much pride in my local community. Yet their professional descendants have not radically unseated the traditions of the past; rather, they have appreciatively inherited them, perhaps inflected by their own Asian cultures, which is to be expected. For America to survive and thrive, both native inhabitants and recent arrivals should reflect well on this model of assimilation.