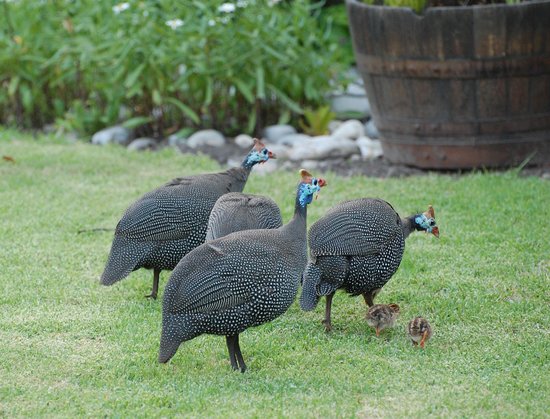 Guinea fowl are almost the perfect farm animals. Adult birds require almost no attention and maintenance. You don’t even have to feed them, though they love a little chicken scratch or millet. They eat all sorts of slugs and bugs and ticks. When the rest of the county is complaining about the annual hordes of grasshoppers and crickets, those of us with guineas barely notice. And while they eat bugs, they do not usually eat fruits and vegetables. This means that you can let guinea fowl, unlike chickens, into the garden without fear that they will devastate your tomato plants or squash or peas or beans. And their guano is compost gold.

They are superb watchdogs. If anything (or anybody) shows up on the farm that’s new or not supposed to be there, they go bananas. Squawking and fussing, if there’s something new on the farm, the guineas will tell you about it. They hate snakes and, working together as a flock, will corner and kill most species. They are fearless. I once watched our flock surround an opossum and drive him off of our farm and across the road into Hog Creek. They returned squawking triumphantly. They have even been known to drive away rattlesnakes.

And, if one were so inclined, they can of course be harvested. Guinea fowl is a delicacy often served in the finest restaurants. And their eggs are quite tasty, though the hens typically only lay from March to September.

Unfortunately guinea fowl are only almost the perfect farm animal. They do have some deficiencies, and the most significant of these is that guineas are unfathomably stupid. They quite literally do not have the sense to come in out of the rain.

Imagine that one or two guineas get separated from the rest of the flock by finding themselves on the wrong side of a fence. There will be no peace on the farm until they are reunited. They will run up and down along the fence, squawking at full volume. Typically the flock will respond to the absence of these two by joining them in their long and loud lament, longing for their companions to join them on the right side of the fence.

As if on cue, the entire heavenly host of guineas will run back and forth on both sides of the fence, vigorously decrying the injustice of the situation. These birds can fly, but it will rarely occur to them simply to fly over the four-foot fence that separates them all. On numerous occasions we have attempted to herd them toward an opening in the fence only to see them repeatedly run past the opening all the while still squawking at the top of their lungs. We’ve seen them spend two days and two nights on the wrong side of a fence, and no amount of trickery or persuasion is guaranteed to get them through the gate.

Moreover, guineas are wanderers (which is why they get separated from one another). In the best-case scenario, they will stay fairly near the house and garden, meandering here and there, eating grasshoppers and chasing off snakes. In the worst-case scenario, they will wander into the road, or down the road, oblivious to the dangers of traffic. Most birds scatter in the face of an oncoming car. The guinea might scatter as well, but he’s just as likely to look up at the car, squawk and screech, and get run over. We’ve seen our flock—both the quick and the dead—half a mile from our house, oblivious to where they were or what they were doing. This proclivity to wander is the second-biggest reason why you can’t reasonably have guineas in the city or even in the suburbs. They will drive your neighbors crazy.

Of course, the biggest reason why you can’t have guineas in the city is the issue of sheer volume. They are loud, plain and simple. You think a couple of roosters might annoy your neighbors with their all-day wake-up calls? Try two dozen guinea fowl who NEVER STOP SQUAWKING. They put the roosters to shame. Above I said that if guineas discover something new on the farm, they will sound the alarm. That’s true, but sometimes the something new is a shovel that’s been left out or a towel blowing in the breeze. They are not especially good at knowing what’s new and what’s not. And so they tell you about all of it—all the time.

And for all of their fearlessness, their stupidity so often trumps their bravery. They simply don’t recognize some predators. The hens make their nests on the ground in high grass, and when they are sitting on a nest, they are extraordinarily vulnerable to predators, both large and small. And at night guineas like to roost in the trees. Owls are one of their most dangerous predators. The owls will come and sit beside the unsuspecting guineas on a limb and then bite their heads off. On many a morning, we’ve found a headless guinea lying lifeless beneath the tall hackberry tree where they like to roost.

The solution to this problem (so we have been told) is to train the guineas to come into a coop in the evening where they will besafe from predators. Supposedly if they learn that they will get a little seed at sundown, they will return every night for their treat. The idea is that when they are still keets (guinea chicks), you feed them in their coop. After you let them out of the coop, you only scatter seed for them in their coop. Ideally they will come back on their own. But we have had no luck with this plan. So we’re back to the task of trying to herd them into their coop. (See guinea herding above.)

Consequently very few of our guineas last for more than one year. Last year we bought two dozen, and only four made it to the one-year anniversary. But they’re worth the risk. In the one year we didn’t replenish our guineas, we were overrun with grasshoppers. They annihilated the leaves on the trees. They were so thick in the high grass that when we mowed, they would fly up and into our faces like swarms of bees. That summer we learned our lesson. Better dumb guineas than no guineas at all.

Play With Your Food