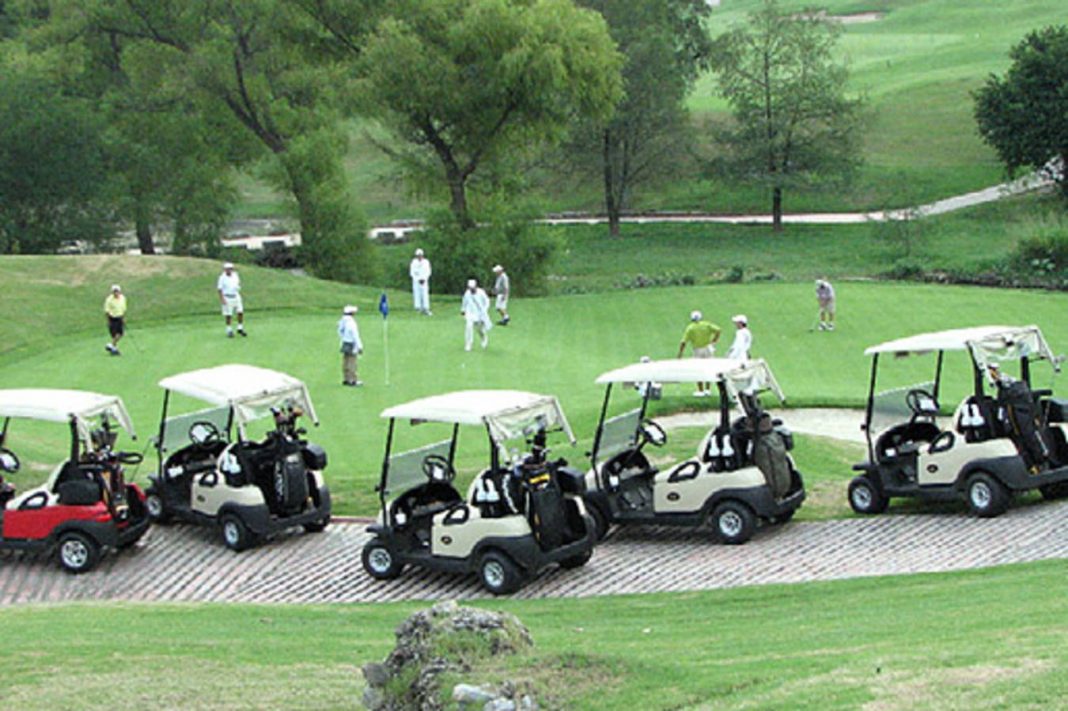 Pheonix, AZ. The golf cart has found its poet. Like Whitman celebrating himself, Charles C.W. Cooke sung of the cart in a recent issue of National Review, not just because it enables him to zoom around without breaking a sweat, but because the cart exemplifies the ingenious, labor-saving, life-improving inventions that free markets make possible for the masses. His ode to golf carts, then, doubles as a defense of libertarian economics, and a respectable defense at that—but for one grave oversight.

We should note that Cooke does not actually golf. Living in Florida, he instead drives his cart to the beach or the bank, and he tinkers with it. Tinkering is what truly interests Cooke—upgrading the engine, adding mirrors and seats, and participating in that tradition of practical mechanics who get bright ideas over a beer. In encouraging this culture of tinkering, free markets “foster an almost endless supply of unique and peculiar products—products that, in a planned or restricted economy, would never have so much as occurred to the people in charge, let alone have come to any sort of fruition.” Human beings are essentially tinkerers and appropriators, and that is how true inventive genius flourishes, far beyond the capacities of technocrats and planners.

All this is true enough, and worth reiterating now that certain ascendant politicians would have us think that centralized economic planning is wholesome and fun.

But any study of the golf cart must reckon the damage it wreaks upon a beautiful tradition and the decline of self-respect it accelerates—both of which seem symptomatic of the libertarian economics praised by Cooke. So a polemic against golf carts might double as one against libertarian economics.

If Cooke played, he would understand how the cart removes from a subtly vigorous and contemplative sport all the vigor and contemplation. This is the central fact about the golf cart. Golf is meant to be played on foot. Players collect themselves between strokes, reflecting on the previous one, preparing for the next, enjoying the course, the day, and their friends as a meditative rhythm prevails. Walking encourages all this; speeding on a cart at eleven m.p.h. does not. An ancient game thus motorized, contemporary golf becomes a lazy diversion that fratboys and executives can enjoy as they drink Miller Lights and make deals. Use of carts by the elderly, disabled, and injured is one thing, but healthy golfers who routinely choose to ride, rather than walk, aren’t actually playing the game. There’s good reason why a concerned former executive from the United States Golf Association joked about changing the name of golf to “cartball.”

(Hopefully these riders will replace their divots and fix their ball marks, as any self-respecting golfer ought. But an observer like yours truly, who worked summers at Rush Creek Golf Club for half a decade, can’t help but notice that riders are less likely to care for the course as walkers care, perhaps because wheels and motors make it harder to love the ground beneath our feet.)

Our libertarian friends will object in principle to declarations about the right way to do something. Justice Anthony Kennedy speaks for them: “At the heart of liberty is the right to define one’s own concept of existence, of meaning, of the universe, and of the mystery of human life.” So, presumably with no authoritative guidance from custom or good taste, every individual should decide how golf is to be played.

Also at the heart of Kennedy’s liberty is cultural decline. Golf becomes cartball, and cartball becomes masscult amusement, like an outing to Dave and Busters. Cooke’s rightful praise of tinkering and free markets notwithstanding, the free market relentlessly incentivizes the invention of gizmos that cater to our laziness, distraction, and impatience: games on our cell phones to save us from a moment alone with our thoughts, single-use plastic Keurig pods to save us from all the tedious steps of preparing coffee, herbicidal sprays to save us from bending over to pull the weeds up, and so on.

Libertarians seem to applaud such developments, so long as all decisions are made freely. “The ruinous failing,” Russell Kirk wrote, “of the ideologues who call themselves libertarians is their fanatic attachment to a simple solitary principle—that is, to the notion of personal freedom as the whole end of the civil social order, and indeed of human existence.” Such systems of thought boast internal consistency but only because they remain cramped. As G.K. Chesterton might say, the libertarian’s “mind moves in a perfect but narrow circle.” Kirk points to the libertarian extraordinaire John Stuart Mill to exemplify this condition: “By the time he was eight years old, J. S. Mill knew nearly everything that a doctor of philosophy is supposed to know nowadays; but his intellect was untouched by the higher imagination, and for that Mill groped in vain all his life long. J.S. Mill became all head and no heart.” Heart is exactly what’s required to understand the backwardness of cartball, to understand that walking is not something that we need be saved from.

Predictably enough, we cannot do away with all the troubles of life without paying some grave price—our physical health, for one. An overweight or obese population—and currently 71.6% of Americans fit that description, according to the CDC—can hardly be a shocking consequence of an economic arrangement so ruthlessly dedicated to comfort that it seeks to remove the physical burden of actual sport. Tocqueville’s fears about democratic despotism seem fulfilled not only by the modern nanny state, but by the capitalists themselves. A regime of convenience “gradually robs a man of all the uses of himself,” and betokens a frighteningly pathetic future like that depicted in 2008’s Wall-E in which everyone is perfectly useless.

Libertarians will counter that individual golfers can still choose to walk—just as people can choose to eat healthy foods, avoid pornography, and otherwise make better decisions than people are inclined to make when faced with all the glittery, sugary, uber-convenient options offered by vendors in The Market. Fault rests solely on individuals making bad choices. If the market goes bad, Ben Shapiro once wrote, “that’s because we chose to make it so. The fault lies not in the invisible hand, but in us.” Honorable though his intentions may be, Shapiro fails to see how the pressures of libertarian economics have proven to be more irresistible and less neutral than the language of individual choice would suggest.

To ride or not to ride, that is the question—except that, for many, it’s just not an actual question. Golf carts become the default. Drive to the typical local golf course; from the parking lot you will observe that 90% of golfers ride carts, perhaps more. Some walkers do so only by necessity of age, the teenage golfers playing with their friends who are not actually allowed to drive carts. When your foursome expects you to ride, and the foursome behind you expects you to ride, and the golf course itself, in hopes of adding cart fees to your bill, expects you to ride, the force of these expectations normalizes the obvious option—even if the choice isn’t exactly forced upon you. In other words, to play the game the way it was meant to be played requires an act of defiance. Attachment to riding becomes painfully obvious after rains clear, when cart use is limited due to the softness of wet grass. Faced with such limitations, many golfers refrain or, at the very least, grumble. The owner of Hickory Hills Golf Course in Jackson, Michigan, tells it bluntly: “If they can’t ride, they won’t play.”

One effort to halt the trend failed not with a bang but a whimper. A couple decades ago, the United States Golf Association launched the “Walking Program” to encourage golfers to shun carts. Like a voice crying out in the wilderness, former USGA executive director David Fay said, “We strongly believe that walking is the most enjoyable way to play golf and that the use of carts is detrimental to the game. The negative trend needs to be stopped now before it becomes accepted that riding in a cart is the way to play golf.” But Fay spoke too late; he was hitting that tee shot into Category Three headwinds. Even www.google.com has little memory of the Walking Program, and it’s hard to find more evidence than an anemic HTML webpage that appears to have been last updated when the President of the United States was Bill Clinton.

The point, to circle back, is that libertarian economics carries a bias towards the cheap and the easy. The market connects those who want to sell ease and convenience with the masses who want to buy it—both sides pushed by invisible hands toward that transaction. Quasi-heroic efforts are required of those who wish to live by higher lights than convenience—those who wish to play golf rather than cartball.

The prevalence of carts is justified, of course, in the name of profitability, and it is hard to begrudge an entrepreneur trying to earn money. But one has to wonder what the costs of this profit may be. Though cart fees certainly bring extra revenue, the course must spend more money maintaining the grounds after the damage inflicted on the grass, maintaining cart paths, and maintaining the fleet. Pretty soon the golf cart becomes an industry unto itself—literally driving the bloated “$70 billion annual economic engine” that is cartball. If people started golfing again and stopped cartballing, it would cost jobs. In this way, as in so many others, disordered living becomes great for GDP.

Golf carts are silly, and their prevalence is an indictment against our culture. If we cannot acknowledge such self-evident facts and fortify ourselves against onslaughts on good taste, then we fully deserve our economic and cultural crises.