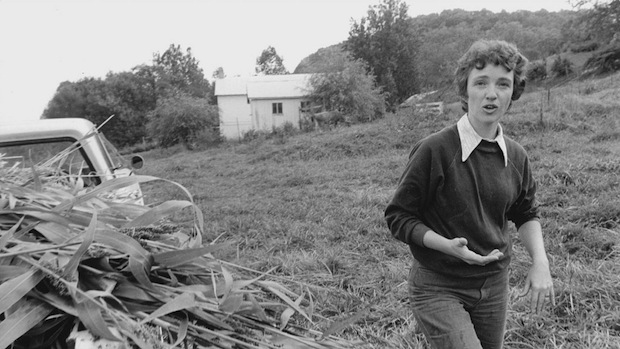 Northern Virginia. As wife of the famed author and essayist Wendell Berry, Tanya Berry has always been a quiet, steady presence within her husband’s pages. She has helped edit and type Berry’s essays, novels, and other written works over the decades—serving as the first (and, per Berry, the most important) editor of his words.

But Tanya herself has spoken and written little for the world. She appears, I think, in a few of her husband’s characters, and she is directly addressed in several sweet, reverent poems. In Laura Dunn’s recent documentary on Wendell Berry, Look & See, Tanya in many ways becomes the hidden star of the film. But I have often wondered what Tanya would share with the world if she were to pick up the pen.

Tanya has not yet published any writings of her own—but now we have a book of her photographs, taken in 1979 for a local community hog killing. And For the Hog Killing, 1979 offers us deep insights into Tanya’s careful gaze and the clarity, precision, and exactitude with which she observes the world—and helps to capture and elucidate her husband’s own vision. It offers us an opportunity to celebrate Tanya, and the faithfulness she has demonstrated to her marriage, home, children, and larger community in Port Royal, Kentucky.

Growing up, Tanya Amyx was an “artsy city kid” who moved often with her parents. Her father was the Head of the University of Kentucky’s Art Department, where she attended college as a music major. There, she met Berry. After the two were married, life continued in a cosmopolitan vein for a while: “the early years of their marriage took them from Kentucky back to California, then to Europe and New York—part of what she once assumed would be a cosmopolitan life with a writer and academic,” Robert Jensen once wrote in a profile of Tanya for Yes Magazine.

But when Berry decided to travel back home to Kentucky, Tanya followed. “I had no clue what I was getting into, but I’ve been lucky because of him, because he’s the kind of person he was, and he’s been lucky because of me, because I believe in the continuity of the home and the family,” Tanya explains in Look & See. She adds that growing up, she “moved and moved and moved,” and felt a deep desire to have a home—a place where her children could belong.

Once in Kentucky, Tanya had to embrace a different lifestyle—one embedded in rhythms and habits of rural folk, built upon the principles of neighborliness, self-sufficiency, thrift, and “craeft.” She learned how to raise animals, birth lambs, tend a garden, steward a country home and property, preserve and can her produce, cook from scratch, and feed a crowd.

This period of study and the resulting knowledge and expertise give an excellent framework to understand the beauty and artistry behind For the Hog Killing, 1979. Tanya does not come to the hog killing as one who grew up in this world (as her husband did). Although this became a ritual for her and her family, Tanya sees this custom with the clarity and insight of one who has lived outside it.

One photo shows us hands outstretched, holding a knife. The sharp instrument in the foreground is slightly blurry, while the grassy ground and steel tub behind the knife holder remains in focus. What could be an ominous photo is distinctly positioned within its rural context, “grounded” in its place.

Several of Tanya’s shots capture an appreciation of the workers who come to this custom with exactitude and skill. In a photograph titled “Loyce,” we see a woman bending over a tub, carefully washing its outside corners and edges. The book’s editor, Ben Aguilar, notes the significance of this action in the caption: “Loyce Flood… washes the outside of the galvanized tub that would be used for seasoning and mixing sausage for preservation. You wouldn’t need to do this, as the outside of the tub would never be in contact with its contents, but Wendell talks about cleanliness as one of the primary orders of the day, and Tanya has called this ‘doing the whole job’.”

Some of Tanya’s other shots are surprisingly poignant and jarring: in one photo, hog heads mounted to a fence are juxtaposed with a live hog, staring at the observer between the fence panels. Life and death, side by side.

There’s also something poetic and clarifying about the fact that Tanya documents the hog killing less thoroughly later on in the week because she herself is working. Tanya dispenses with the “high art” of photography to get her hands dirty in the “low art,” recognizing that the act of participation and service is worth more than standing on the sidelines. In a recent interview with Garden & Gun, Wendell Berry noted that he has often set his writing aside for similar reasons: “There are times when my writing has had to come second to my family or my neighbors or my horses or my sheep. These reminders of things more important than writing have kept my writing firmly placed in the workaday world, where it belongs.”

The work of a “housewife” is often overlooked or denigrated in our world. Tanya’s role, many would argue, is sadly inferior to her husband’s as a “man of letters.” The fact that she has been so willing to play a quiet role in her church, community, and home is to be mourned, not celebrated. Indeed, after Berry wrote about his wife’s editorial and transcription help in an essay titled “Why I Am Not Going to Buy A Computer,” both Berry and Tanya were rebuked for the assumedly un-feminist dynamic of their working relationship.

But these photographs capture something different: the happy workings of a vibrant membership, and the attention of one woman ennobling and memorializing it all. One could say the same of Tanya’s silent editorial prowess: it is present in Berry’s work, enhancing and sharpening it—to a degree that few of us will probably ever know. There is more here than meets the eye: a secret mystery, a bond of intellect and love, lending light and beauty to a legacy that will last for generations. Berry himself suggests to Robert Jensen that he never could have accomplished what he did without Tanya. He has been “trying to win the affection, all the time, of an intelligent woman,” he explains.

The unsung women who have kissed bruised knees, weeded gardens, canned hundreds of jars of green beans, and cut flowers for the kitchen table rarely receive a national spotlight. But interestingly, in this time of worldwide pandemic, many of us—men and women—have embraced their rhythms: making sourdough bread, planting victory gardens, and cooking from scratch (perhaps for the very first time). Like Tanya, many are learning the artistry and skill behind the domestic arts, leaning into the beauty and comfort they offer.

Many are also desperately hungry for community in this time of social distancing and isolation. Both of these hungers may give us a deeper appreciation of Tanya’s photographs than we might feel otherwise. Positioned decades in the past, in a dying way of life, they still speak to us of worth, love, service, and home.

After I moved from Washington, D.C. cubicle work to a life centered on children and the home, I felt the tension between our society’s obsession with profit and efficiency, and the virtues and habits required to care for our land and communities. This tension and resulting reverence is visible in Tanya’s photographs as well. She is showing us an ancient rhythm that exists beyond the slaughterhouse’s factory lines and machinery, with their ruthless speed and efficiency. She is showing us husbandry and housewifery, with their resultant set of virtues and skills. She displays a process that is the opposite of “optimized”: Loyce Flood does not wash the outside of the tub because she needs to, but because she is committed to a thoroughly wholesome discipline, to an ideal that exists beyond mere ease. These virtues and rituals convey respect for the animals who died on this day. But they also convey respect and reverence for the work itself: it is not something to be done in a slapdash or halfhearted manner, but with one’s whole being—with a sense of pride. Thus, too, Tanya sets aside her camera when called upon to do her work well. This consideration is often missing from our perspectives on rural work, on the labors many dismiss as “drudgery.” We miss the pride.

This pride, too, should be extended to “career-less” women like Tanya. She tells Jensen that when she moved to Henry County, “I got a whole other picture of ‘women’s work,’ and I changed a lot and got more pleased with the idea of women’s work being good. And when they worked hard, they deserved to be noticed for working hard and for doing good work.”

Women like Tanya bring artistry and honor to everything they touch: the homes they inhabit, the land they steward, the children they raise. These photographs are testimony to the clear, sharp eye of a woman who is herself an artist—and who brings that artistic gaze to every endeavor she undertakes. From baking to birthing lambs to editing manuscripts, the work and life of Tanya Berry has been good—and she deserves greater praise and recognition for it.