Caldwell, ID. Bradley Birzer’s Beyond Tenebrae: Christian Humanism in the Twilight of the West opens with his description of Tenebrae, recognized in Christian churches today during the hours after 3 p.m. on Good Friday, the “moment when the world shook with the absence of grace.” Tenebrae, Birzer writes, is where our culture now seems to linger, “hovering, circling, peering into the abyss, too timid to jump in, not strong enough to walk away” (xiii). 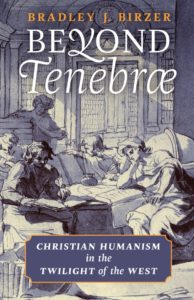 Even as the abyss has become more ominously visible in 2020, Birzer is less interested in plumbing its depths and more vested in recovering traditions and people who kept hope alive in tumultuous times past. After briefly sketching out the tradition of Christian humanism and arguing for its vitality, Birzer pays homage in a series of pithy vignettes to those writers, teachers, scholars, and saints who have most inspired and influenced him. Given that Birzer makes no claim to comprehensiveness, it is a book that models generosity and gratitude as at least part of any solution to our woes. This generosity extends to places as well; one footnote reminds readers, “One should never regard Kansas or any part of it as ‘fly-over country.’ It is deeply mysterious and gorgeous in its own right—at least for those who have eyes to see and an ounce of imagination in their soul” (184).

Birzer is professor of history and Russell Amos Kirk Chair in American Studies at Hillsdale College, the author of several biographies and histories, and the co-founder of The Imaginative Conservative. Beyond Tenebrae, his most recent book, serves as the starting point for our conversation here.

Stewart: Your book overflows with generosity for its subjects both living and dead, from J.R.R. Tolkien to Margaret Atwood to two of your own grandparents. Our current historical moment is not marked by generous assessments of our forebears. What might you say to those who do not find such generosity appealing, or who even consider it impossible, misguided, or wrong?

Birzer: Matthew, thank you so much for speaking to me. I’m a huge fan of Front Porch Republic, and I’m deeply honored to be a part of it. As to your question, I find that our times demand a certain optimism. Not because the world is great—it’s not. In fact, it’s rather horrible. Yet, no matter how horrible, the good in the world is never actually lessened, and we must struggle to remember it, to recognize it, and to integrate it into our understanding of things. The good can be mocked, ridiculed, ignored, dismissed. . . but, it always remains. And, the greats who have spoken to us in the past also remain. To be sure, while I have my faults, I don’t think ingratitude or disloyalty figure into my current array of foibles. I very much try to remember who came before us and how their choices—good and bad—led to where we are today. Two of my heroes, Russell Kirk and Christopher Dawson, tried to remind us, time and again, that whenever evil arises, God raises up his saints—maybe in the most obscure places in the world—to counter such evil. Thus, when we think of the twentieth century and contemplate the evil of Hitler, Stalin, and their ilk, we must, to be just, also remember Dorothy Day and Thomas Merton and Maximilian Kolbe and John Paul II and . . .

And, by the way, there’s a lot about Margaret Atwood I dislike. But, of course, there are things about myself I dislike as well. If I only judged Atwood by what I dislike, I would be guilty—to my way of thinking—of being inhumane. We are each, after all, made up of good, bad, and that which remains untested. I would never want to be judged by my absolute worst quality or by the worst decision I ever made. I would rather not judge Atwood (or Tolkien or Kirk) by their worst qualities.

Stewart: One of the goals for your book is to rescue the term “humanism” for Christians who are suspicious of it based on the dominant strand that traces its lineage to the Humanist Manifesto of 1933. You offer five “canons of humanism” in order to recover an alternative variation of the tradition. Briefly, humanists are bonded by the following: 1) belief in human dignity; 2) defense of liberal education; 3) affirmation that humans are irreducibly spiritual and material; 4) citizenship in the Republic of Letters; 5) belief in “a power of some supernatural order” (1-11). What have Christians lost by holding this word in suspicion? Has suspicion of the word itself prevented the tradition as well?

Birzer: Great question, Matthew. Words matter, and, of course, as has happened so often in the English tradition, words evolve. Humanism became a serious “god-like” term—equivalent to liberty, democracy, etc.—in the nineteenth century. It became so popular by the 1890s and early 1900s that everyone wanted to claim humanism for their own. Like our current use of democracy, it had come to mean “everything that is good.” The height of such cultural capture of the term came in the late 1920s, when a wayward Protestant minister adopted the term for his own form of “religion.” That form of religion—devoid of anything supernatural and really, frankly, not so kind to the natural—eventually evolved into the powerful Humanist Manifesto of 1933, which its professions of desired secularism. Simply put, the writers of that manifesto captured the word and have held it in captivity—by their allies and their opponents—for nearly a century now. At its most simple definition, being a humanist means believing in the humanities, the liberal arts. At its most simple definition, then, being a Christian means being a follower of Jesus Christ. A Christian humanist, properly understood and at the most fundamental level, means being a follower of Jesus Christ and being a lover of the liberal arts. Of course, the implications for these things are immense, especially when one starts getting into the Word and the Incarnation.

Stewart: In your chapter on Eric Voegelin, you write, “The way to combat the evils of the world is to remember. . . . To remember the beginning of a thing, the truth of a thing, and the beauty and goodness of a thing” (140). Can you say more about why remembering is such a powerful and important task?

Birzer: Voegelin was following in the line of St. Augustine and, before him, Cicero and Plato. In Plato’s understanding, one should be ready to employ (or accept) a “divine madness,” that is, a recognition that real imagination comes from the image, something that is placed just outside of or next to, one’s mind and soul. The irony, then, is that while the image is of divine origin, it is the thing that makes us most human. As St. Paul would note in his New Testament reflections, our soul is a glass through which we see darkly. Or, scripturally, we might think of the soul as a spotted mirror. We see the Image (the Incarnate Word) through distorted and fallen eyes, but it nevertheless reminds us of the specific truths that can be made manifest in a world of appearances and accidents. Thus, to “remember” that which is always, is to pull down, properly, the things of heaven to earth. Such things include the dignity and liberty of the human person, each unrepeatable and made in the infinite Image of God. The last of the great pagans, Cicero, argued that reason (the word) was the language that connected all men and women to one another and to the divine. Thus, in our prayers, we “remember” that which always is true. By remembering, we see those things of eternity, even as we are trapped within time. For the Christian, the ultimate remembrance is the sacrament of communion—“do this in memory of Me.”

Stewart: Reading your book, I was reminded of a recent podcast by Joshua Gibbs that reflects on a saying from Gustav Mahler: “Tradition is not the worship of ashes, but the preservation of fire.” For those of us who are sympathetic to the goal: what can we do to better tell the difference between worshiping ashes and preserving fire?

Birzer: I love that quote from Mahler, and I didn’t know it was from him. I knew the quote, but not the source. Thank you for this! The danger with progressive and liberal understandings of the world is that they’re almost always speculative and emotional, not reasonable or rooted in reality. Someday, we’ll have this or that or someday will cure poverty or someday we will conquer the stars . . . or whatever vision of the future holds at the moment.

Second, the best understanding of the human person (outside of religious revelation), the conservative believes, comes from the evidence of human history. At this point, in 2020, we can see with some certainty what man can do and what man should do, simply because we have thousands upon thousands of years of experience and a huge amount of written and oral records/data. The conservative says, rightly, show me in history where that happened or how it happened or how it worked. The liberal and the progressive tend to ignore the past, though, seeing it as dead weight. Thus ignoring our actual evidence for human success and depravity, the liberal and the progressive typically offer only what should be good, but without any evidence or reality tied to it. Thus, the conservative is always burdened with evidence, but the progressive/liberal is free to speculate.

The real conservative, to my mind, must always judge his inheritance. We can judge by two transcendent means. First, does that thing we’ve inherited preserve the dignity and uniqueness of the human person? And, second, does that thing mesh with our norms and morals as revealed by religion?

A conservative, therefore, who worships the ashes, is as deluded as the progressive who only envisions what should be.

Tying this back to your first question, Matthew, I believe—for me, at least—that I can best promote a solid and humane future by defending the solid and humane of the past. Again, with all of my failings, I have managed to spend five decades trying to be gracious to those who came before us. I deeply love my maternal grandmother, for instance, whatever her own failings. She loved me, and she taught me to cook. Not a day goes by (and I love to cook) when I don’t think about her and what she taught me, even though she died in 2003. Every time I cook, I somehow honor her and all who came before her. The same thing is true, I hope, every time I’m in the classroom. At Hillsdale, I try never to forget our young men who made up the 4th Michigan and 24th Michigan regiments, each sacrificing themselves on days 2 and 1, respectively, of the Battle of Gettysburg. What kind of Hillsdale professor would I be NOT to honor such men? What kind of man would I be not to honor by grandmother? By its very nature, gratitude is one of the most important virtues of a conservative.

Focus on the Local: A Conversation with Carl Trueman