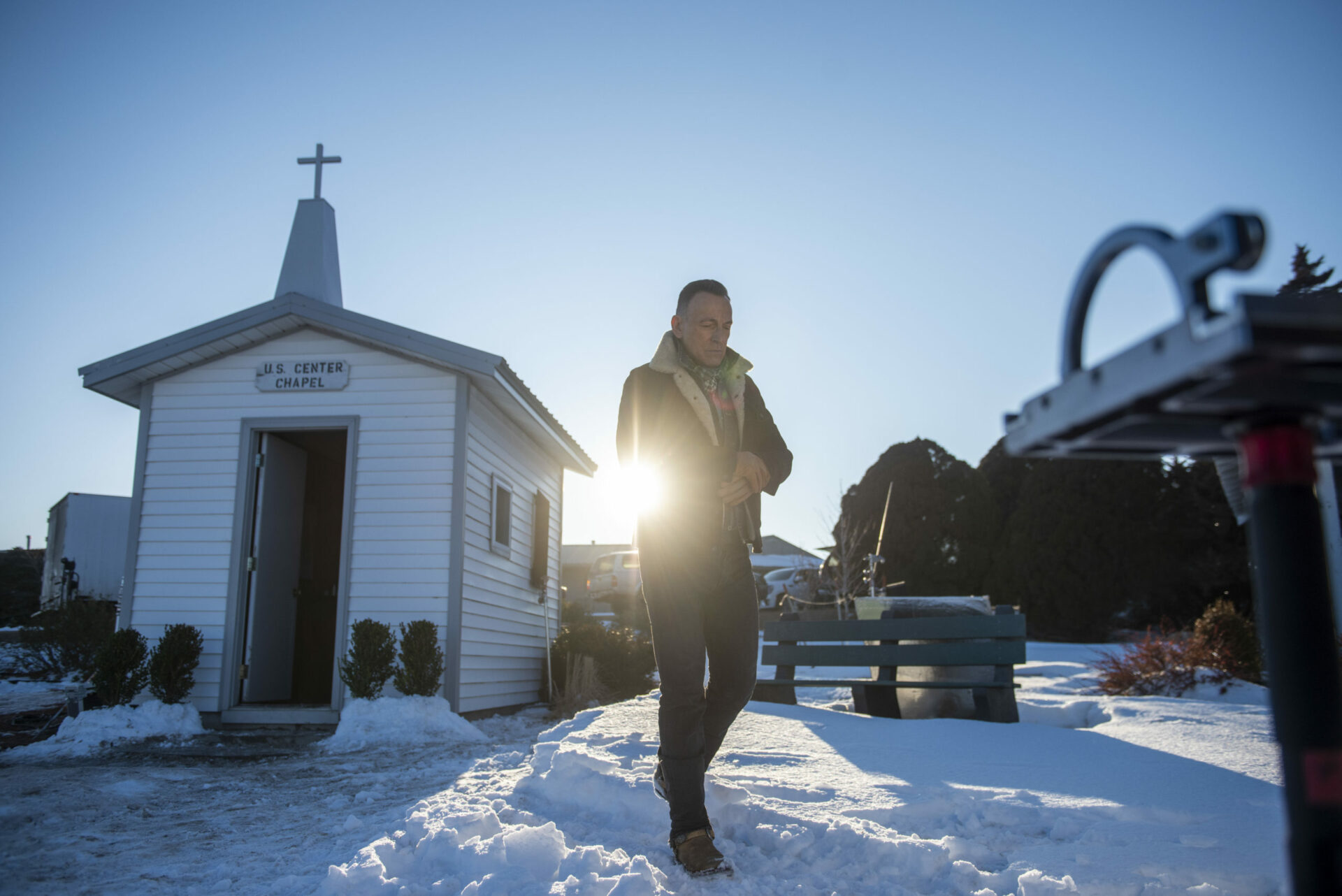 Huntsville, AL. One of the most talked about commercials of this year’s Super Bowl was, surprisingly, centered on religion and community. Jeep attempted to persuade those partaking in the annual High Temple of the American Civil Religion that the ambiguous “center” held plenty of space for people of all persuasions–religious, political, racial–to come together. After all, at the very geographic center of America is an empty chapel. And Bruce Springsteen. But is it really true that there is room to meet together there? Jeep offered little more than platitudes and vague promises of unity. True unity takes more than good feelings about each other, though. It takes trust, hard work, and a shared story.

At our core, we all long for a shared story. In fact, much of our social and cultural life depends on one to function well. After the Jeep Super Bowl ad, a friend of mine mentioned that he wasn’t sure that anyone knows the meaning of the “freedom and unity” referenced in the commercial. He was right that not knowing or thinking deeply about what these words mean plays a role in fracturing our country. More fundamentally, though, as a nation we no longer trust one another, and that contributes to an inability to share a common understanding of such resonant words.

Both ends of the political spectrum certainly pay lip service to freedom as a good, but they mean very different things. The right claims that economic freedom and self-sufficiency is the ultimate good, while the left declares that sexual identity and self-expression are the chief end of man. In addition to this underlying philosophical difference, we often can’t even agree on a basic set of facts to inform our national conversations. Does systemic racism exist? It depends on who you ask. A recent survey indicated that 77% of Fox News viewers believe “whites face similar discrimination to blacks.” Was the election stolen? Again, the country is split and a different story is preached depending on whom you speak to. How did we get to a place of such diverging realities? Political speak from Washington? The latest headline from MSNBC or Fox News?

I believe that the only way to begin to heal these fractures is to resist the dehumanization of our neighbor that mass politics demands and instead work to find the stories we share with real people in our local communities. Despite differing political persuasions, socioeconomic status, worldviews, and other differences, we can expect to find common ground because nearly everyone’s vision of “the good life” is rooted in a communal, relational society.

For example, members of the political right frequently lament the current state of America and pine for “the good old days” (generally, though not always referring to sometime in the mid-20th century). Their political opponents frequently characterize this longing as a dog whistle for white supremacy and sometimes a return to Jim Crow. Certainly there is a small segment of the population for which this is true. However, it seems that many are not longing for white supremacy, but for a return to a time with a shared national story. In his book Bowling Alone, Harvard political scientist Robert Putnam thoroughly showed that social capital peaked as community organizations flourished in the post-World War II era. During this time, neighbors and communities trusted one another, generally were more involved in one another’s lives through local civic organizations, and felt a unity of purpose different from our current experience.

Likewise, when many on the left advocate for “Scandinavian style social democracy,” they are shouted down from the right as Socialists or, worse, Communists. But despite this seemingly stark conflict, certain underlying conditions that the political right might embrace are necessary for the flourishing of systems such as those in Sweden, Norway, and Denmark. What are they? Smaller national populations, stronger shared history, more culturally homogeneous cultures, and most importantly higher levels of social trust. These high levels of social capital were on display throughout 2020 as Sweden charted a public health policy (of disputed effectiveness) that hinged on those strong ties. Many on the left have not understood the necessity of a close-knit country to provide stability for the ambitious policy goals of the Nordic states. Whether aware of it or not, Americans who desire similar policies must also embrace the need for a shared story amongst people here.

So what hope is there in our vast, heterogeneous country where we seem to be fractured and moving apart along multiple axes? To be honest, I am not particularly optimistic about the possibility of regaining a shared national story—even with Jeep commercials and empty chapels. Bill Bishop has written about the continued sorting of America into likeminded clusters. On top of that, what shared history we have as a country is no longer universally viewed as good. Until recently, in our most trying times, we fell back on the ideals of the founding documents of our country to unite us, holding fast to the idea that even though imperfect, we have continued to seek to live out their principles. But today, polls show growing dissatisfaction with our founding documents, and prominent projects such as the New York Times 1619 Project have attempted to recast our country’s origins as something uniquely different than the ideals most of us learned as children.

Despite that pessimism, I am optimistic about the ability for shared stories and culture at local scales to provide focal points to unite the smaller communities of which we are members. From those shared local stories, seeds can be planted that may grow into broader coalitions that draw us back together on a national scale. Despite differences that are exacerbated at the national level, we often share significantly more in common with our “enemy” when we interact with them at human scales.

Three examples from my life and communities demonstrate this. In times before COVID, a friend and I started a cookbook club. Cookbook clubs have sprung up across the country, but we were motivated in part by the desire to draw together people who wouldn’t otherwise have crossed paths. To be a part of the club, all you needed to do was show up and love good food. And who doesn’t love good food? Although COVID has temporarily halted our potlucks, over the course of a year and a half we regularly gathered with a group of 15-20 people from different backgrounds, religious beliefs, and professions. Additionally, most club members were transplants to Huntsville from other parts of the country, lending another dimension of diversity to the group. Perhaps the most encouraging outcome was that the shared food provided the backdrop to share and discuss our stories with one another.

Next, in the small town of Picayune, Mississippi (where I grew up), a book club was formed in recent years. This was to be neither a group devoted to high literature nor to an endless parade of John Grisham novels. Instead, it was a club that invited all who wanted to read together. And so the Anglican priest who loved theology and high literature sat down with the lifetime hunter who wanted to read war histories. Though there seems to have been few conversions in literary tastes, the act of reading, discussing, and listening fostered relationships across boundaries that would not typically have been crossed.

Finally, I thought of Graves Grocery, a “community rest stop” in Lacey’s Spring, Alabama, just outside of Huntsville. Pam Graves started Graves Grocery in 2013, taking over an old, existing building on a stretch of highway through the community. When she opened the store, her brother told her that she would end up married to it. What she didn’t expect was that she would end up married to the community. The Grocery served as a gathering spot for town halls to discuss community issues, a place to stop by after work to eat a good meal and listen to live music at an open mic night, and a place to participate in a community garden. All who cross the threshold of the store become part of the family. Pam told me that over the past year, those who have become members of their community have had tragic deaths, house fires, and high school graduations in the midst of COVID. Hardships for sure. But also shared suffering and a shared story. The community counts as its own folks from across religion, race, and rank. And their shared suffering and shared story endear them to one another.

So reader, if you watch national spectacles from your couch or tune into the national news, expect to walk away feeling like the prospects of national healing are slim. On second thought, don’t tune into the national news. Go to your local civic association meeting and meet neighbors you don’t know. Or find out if there is a book club at your local library you can participate in (even if you don’t think you will like the book!). Or maybe even start something yourself by inviting a few folks into your life around a shared interest. Pretty soon, you will find that your neighbor is not your enemy. And even if he is, Jesus tells us to love him anyway.

Technique and Food: Why our Local Food System does not Feed...