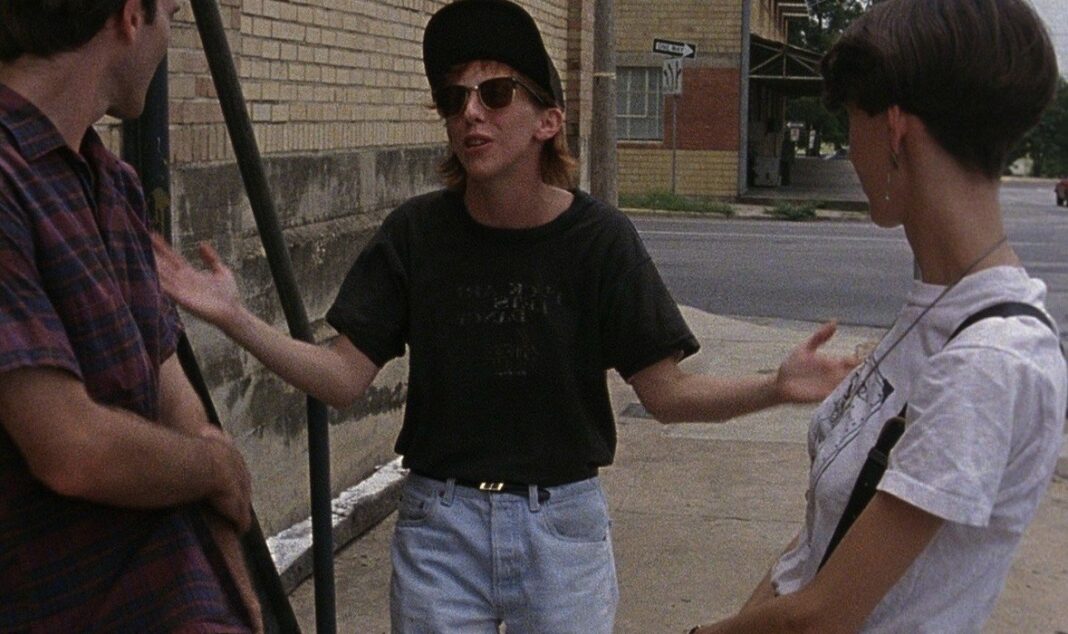 West Palm Beach, FL. It’s the beginning of summer, which means people are on their way out of town. It’s not just vacation season, it’s the annual exodus of new graduates ready to leave the state or run away to the big city. Many people want to get away or see somewhere new, often in hopes of making a splash or learning something about themselves. But those looking to truly expand their horizons and explore creative possibilities would do well to consider the lessons of Richard Linklater’s film Slacker and not wander too far off.

Slacker is an independent film from 1990 centered around Austin, Texas. The film was innovative for essentially having no recognizable plot and having the camera follow one person after another, moving along as people came into contact with each other. It is filled with the kind of artistic and conspiracy-minded conversations that people have when they have a little too much time and philosophy on their hands and not quite enough responsibility. According to Roger Ebert, the movie had “an appeal almost impossible to describe,” though he was more able to describe the people the camera followed, the “slackers”: “anyone who has ever lived in a campus town will also recognize them under such older names as beatniks, hippies, bohemians, longhairs, peaceniks, weirdos” etc. Like several of Linklater’s films, it is a celebration of creative filmmaking and existential conversations, and it is a testament to Texas, but it is also a really good reminder of the importance of less-sung places in the creative process.

Richard Linklater grew up in Texas and moved to Austin in the 1980s with a passion for movies. Before he started making them, he was busy watching them. In 1985, he co-founded the Austin Film Society, which was all about showing films and making space for things that were experimental and independent. When he was ready to start making his own movies, Linklater started that in Austin, too. And he has been making things in and around Texas ever since. Though he has made Hollywood movies, he continues to base himself in Texas. And he has continued to be an innovator, making memorable films like Dazed and Confused and Before Sunrise, and also experimenting with form and genre in different ways, as he did in Waking Life and Boyhood, the latter shot over the course of twelve years. Though Hollywood is the heart of the movie industry, Texas was and is a great place for Linklater to be.

In our culture, the places that are considered full of creative energy are often the cities that never sleep. In books and movies, artists and entrepreneurs grow up and hurry off to downtowns that are the heartbeats of industries and cities that are the crossroads of commerce. And those kinds of cities are very important places because when a lot of interesting people are in the same square miles, it’s easier for them to meet and innovate together. As Jane Jacobs pointed out, cities are still the biggest source of big ideas. But a city needn’t be the biggest or the most industry-centered to be significant; in fact, sometimes creative expression breathes better in less-sung places.

Austin in the 1980s and 1990s wasn’t the place, but it was certainly a place. In the PBS American Masters special about Linklater, his friend and former cameraman, Clark Walker, explained that for people growing up in east Texas, “Austin was, literally, the way station to escape. Once you made it that far, you had a chance finally.” At the same time, Austin was not too far away. According to Linklater, he “had to pick somewhere to live and thought New York, L.A., San Francisco–much too big a leap. There were really cool niches and I felt that moving to Austin, like suddenly everyone I met was an artist of some kind.” This was Austin before SXSW; it had a scene but it wasn’t the scene. Austin was that same kind of place for Willie Nelson when he left Nashville. It wasn’t “music city,” but in a way it was a place where more things could actually happen. Once Nelson was a little off the beaten path, his personality flourished and his career finally boomed.

In its own way, Slacker does a good job of describing what can make a mid-sized city or an offbeat place so hospitable to creativity. One key feature is affordability. It made Austin livable for Linklater, and it’s reflected in Slacker. So many of the people in the film are just wandering around or sitting around, not exactly working. In one part of the movie a guy is out walking and runs into a girl he knows. She asks what he is up to and he replies that he’s not up to much, mainly “lollygagging around, still unemployed, in this band…” People drink cheap coffee, seem loosely employed and share houses with a lot of roommates. Of course, these are “slackers,” but they are also a snapshot of a place that is not too expensive to live. An affordable city gives amateurs a chance to take risks and make things. In other places, the price of entry for experimentation can simply be too high.

Creativity also requires time. Josef Pieper explored the link between leisure and philosophy, Slacker shows us in almost-real time the link between leisure and creativity. Ideas and innovation happen when people sit around and talk or read, or go to shows, or do their own art, etc. That’s pretty much all anyone in Slacker seems to do. One guy working at a bar near the end of the movie says: “I don’t do much, really. I just read and work here and sleep and eat and watch movies.” More affordable cities mean more time for leisure, which is necessary for contemplation. If you spend all your time working your second job, there’s a lot of deep thinking you don’t do.

The kinds of boundary-expanding conversations that take place all over the city in Slacker are the same kind that change our understanding of the real world. Few collaborations have been more significant jointly to the fields of economics and psychology than that of Daniel Kahneman and Amos Tversky. Describing their years-long collaboration and its method in Thinking, Fast and Slow, Kahneman wrote: “We maintained our routine of spending many hours each day in conversation, sometimes in our offices, sometimes at restaurants, often on long walks through the quiet streets of beautiful Jerusalem.” The winding conversations on sidewalks chronicled so well in Slacker are exactly the kinds of conversations that can lead to creative insight, and they happen more easily for amateurs and early career creatives in more livable places that are also not too crowded.

Slacker further demonstrates the importance of casual connections and the ways that smaller cities and less-known places can facilitate them. The camera moves from one subject to another as it follows people having small exchanges, in bookstores, on sidewalks, in diners, and all over. One marvels at life before cellphones, when casual conversation with strangers was more common. But, even today, smaller cities are easier to traverse on foot or by bike, and you’re more likely to bump into someone you know, even if they’re not carrying oblique strategies cards and looking to chat. If you spend all of your time hustling rent, you don’t have as much time to connect with others. And if your city is too big, you almost never bump into anyone you know, or you come across people who want to know if you know who they are. But if you’re in a place that has somewhere between no reputation and too much, the possibilities for exchange are still manifold and more people are more approachable.

It seems like everyone in Slacker is in a band, or doing art, or writing, or doing something creative. Though the characters are underworked and overeducated, they have affordable housing, available parking downtown, locally owned shops and restaurants, bookstores, and local bands. The 1990 Austin of Slacker is a context in which amateurs can thrive and experiment, and the movie demonstrates what makes smaller and mid-sized cities such great places for creativity and fresh ideas. This is the kind of thing that Richard Florida writes about, but it is also observable in the lives and works of many creative people.

Creativity seems to thrive in places that are not too crowded, where things can happen but not too much is already happening. Ernest Hemingway made a habit of finding interesting but slightly out of the way spots. He was always running away from the crowd. The Spain that Hemingway loved to visit was not the place where everyone was backpacking at the time. His Key West wasn’t all that easy to visit. Even Hemingway’s Paris was a postwar city, where people could spend hours in a café if they didn’t have good heating and could live in walk-up apartments while working small-time jobs. And when a place got “discovered” by too many people, or too many wealthy people, Hemingway considered it a little bit ruined.

The center stage has lights that draw in an audience and performers, but these can make it difficult to keep the creativity coming. Though Thomas Wolfe did surmise that You Can’t Go Home Again, in that novel his character George Webber struggles to know himself and focus on his craft once he’s in the big city and has “arrived” as an artist. Instead, he is distracted by relationships and parties and travel. But great artists constantly emerge from secondary cities, which have their own distinctive personalities and just the right amount of scene and distraction. Despite the prominence of Nashville in country music, Johnny Cash and Elvis both came out of Memphis.

The best place for creativity and community is not always the biggest city or the best-known scene. The time and leisure needed for exploration aren’t often available, especially to amateurs, in the most expensive cities or the most popular vacation spots. There will always be creative people in places like New York and Miami and Los Angeles, but the best environments for fostering creativity today are more likely places like Cleveland and Kansas City and Indianapolis. The best spark of an idea isn’t likely to appear during the most Instagrammable vacation. Slacker portrays a city and a scene that are delightfully different and offbeat, and the best kinds of places for many emerging creatives today are that way, too. You don’t have to leave the state or run off to the biggest city to do something big: there is a real beauty and opportunity in the less-sung places.