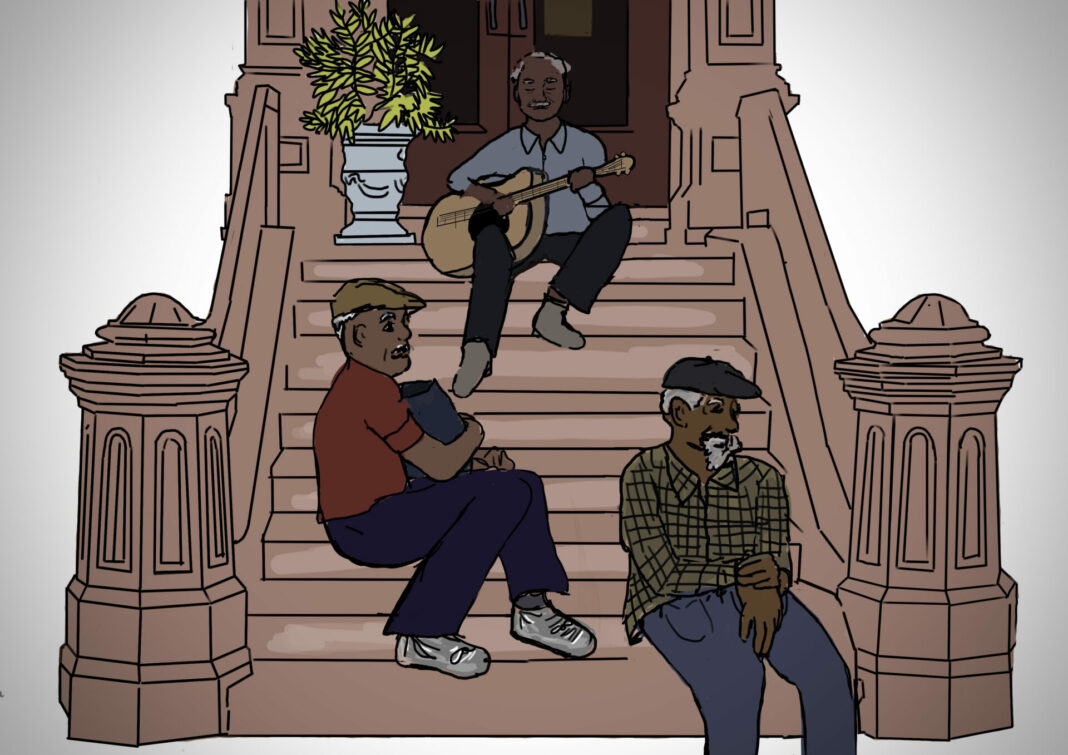 New York , NY. He sits there day after day, George does, leaning up against the front stoop and watching the passers-by. He usually doesn’t say much—maybe a nod or a “How we doin’?”—but his mere presence there, on that perch overlooking Central Park West, emits a grandfatherly aura that seems to say, Slow down, people. You got all the time in the world.

Does he think about anything in particular? Talk to anyone? “Nah, I just relax,” he said to me. “That’s the only thing I’m worried about.” For George—retired factory worker, widower, father of two, Alabama-raised but New York-made—stoop-sitting makes for a fitting final chapter to a life well-lived. The air is fresh. His neighbors are close, but never intrusive. “Right here,” he said warmly, “I spend a lot of time.”

The front stoop, it turns out, is deeply woven into the New York City story. In the seventeenth century, Dutch settlers brought with them the tradition of the stoep, front stairs thought to have been used in the Netherlands to protect against the region’s notorious flooding. So explains the stoop’s architectural roots. But functionally, the stoop did something more: In a city that lacked the space for traditional alley-side service doors, the stoop allowed wealthy land-owners to keep their own entrances pristine while relegating their servants to smaller service doors, tucked underneath the stairs. Servantry is far less prevalent today than it was then. But the wealthy continue to embrace the aesthetic quality of stoops, with stoop constructions booming in Manhattan and the more upscale parts of Brooklyn.

Yet stoops are far from an elite phenomenon. Step into any working-class neighborhood in the city and you’ll find people of all stripes hanging out on the front stoop. The kids might be playing “stoop ball,” a classic New York game in which a “batter,” standing directly in front of the stoop, ricochets a rubber ball back to a group of “fielders,” who catch the ball for points. Then the kids might take a break and have a popsicle on the steps. And when they grow older, the stoop might become the site of deep teenage conversations, and perhaps the popsicle will become a brown-bagged beverage from the bodega. Then, at last, the teens will be replaced by folks like George, old and tired and just looking for some peace and quiet.

Here emerges the stoop as neither an architectural adornment nor a fleeting trend, but as a central social locus for the people of New York. This city has been dubbed the loneliest in the world. And much of the time, passing tunnel-visioned New Yorkers on the streets or sitting next to them on the subway, that distinction can feel deserved. But not when you pass by a bustling front stoop. It is here where our neighbors’ joy and laughter and special moments come to light, brightening up the city street and making the neighborhood feel whole.

To the extent that stoops act as an intermediary space between the public realm of the street and the private realm of the home, they are much like a front porch, the type that characterizes traditional American homes in the South and elsewhere. People love a good front porch, a good front stoop. And for characters like George, the practice becomes a ritual—a haven that beckons each day when the trials of life become too much to bear.

For Miss Maudie of To Kill a Mockingbird, too, the practice was second-nature: “After her five o’clock bath,” author Harper Lee wrote, “she would appear on the porch and reign over the street in magisterial beauty.” Someday, George and Miss Maudie, I will join you. Until then, though, keep the neighborhoods glowing and the good cheer coming.

The Front Porch as a Way of Seeing: A Review of...