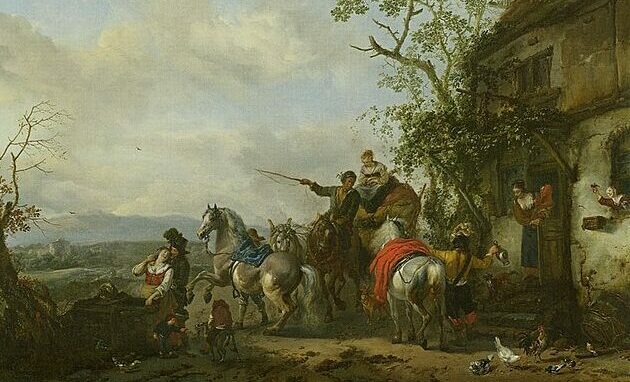 Waco, TX. There’s nothing better than a double point, one dog skidding to a stop, her bell silent, tail quivering, left forepaw lifted, body rigid, the second dog “honoring” her point and doing likewise. Then, as one or both dogs run into the food plot, the pheasant exploding into the blue sky, the riot of bright colors, the straining against gravity as the shotguns pound away.

What does it mean to send lead or steel pellets through the gorgeous body of a Kansas pheasant—or a bullet through the sleek body of a Texas deer?

Hunting may not be typically considered to be an avenue for thinking about the Christian faith, but after rediscovering the thrill of hunting in recent years, particularly after buying 60 acres of land in Texas, I have come to realize that hunting gets us much closer to experiencing the body of Christ than I’d previously thought.

Having the skill to bring in your own meat is one thing. Appreciating that what you’re doing may well be bringing you closer to the torn flesh of our Lord is quite another.

I hope this isn’t blasphemy, but I think hunting can give us a new appreciation for the Incarnation, even the Crucifixion and Resurrection. How so?

First, being out in the field not only gets us closer to nature, but to the God of natural revelation. As we move and live and have our being as imago dei, made in the image of God, we naturally seek out other enfleshed beings—usually other humans, but sometimes animals. Most of us cuddle our domesticated animals; some of us still persist in hunting our wild animals.

Secondly, we gain an enhanced sense of being alive as our body encounters that animal: mechanically—through a gun or bow—then intimately—through touching the torn flesh of the animal we are blessed to bring down and then hopefully eating that animal, taking its flesh into our bodies.

I would hazard that such an experience is so foreign to most Americans now that they would recoil at even hearing of the process in the abstract, much less witnessing it—still less doing it themselves.

And yet. This experience, which I could commend to you on many other grounds—connecting to nature, harvesting your own meat as a “farm to table” experience—may lead those of us who profess faith in Christ closer to the incarnate Creator.

Moving into the realm of animals that we hunt puts our bodies (and souls) into contact with creatures Other than us. They are soul-less, even if we wish it were otherwise: see James Dickey’s memorable poem, “The Heaven of Animals,” where he admits their lack of souls yet imagines them resurrected and hunting. Attending to them, entering their lives, then occasionally killing and eating them feeds our bodies and our souls.

Experiencing both the physical discomfort of aching knees and trembling arms, the stench of the hunter’s sweat, and the material body of the bird or deer or hog, first whole, then violently rent, gives us a heightened sense of our own embodied-ness, makes us more creaturely through contacting and sometimes harvesting another creature.

Finally, we are thus brought closer to the life of our suffering Savior, who offered His own body and blood for us that last night before the hill of Golgotha hove into view as He strained and sweated under the nearly unbearable weight of the cross. As “The Prayer of Humble Access” in the Anglican service of the Holy Eucharist notes, we are not even worthy to gather up the crumbs from under His table. And yet we are invited, hospitably, to enter in, as George Herbert so memorably related in “Love (3)”: “You must sit down. . .and taste my meat.”

Upon entering, we eat and drink, each according to our own traditions—a memorial service, an experience of His real presence, or a transubstantiation.

Eating the torn flesh of an animal we have killed is a tradition passed on from generation to generation. It’s a rite, a ritual.

But so is the Eucharist. It was us who scapegoated Christ—we heaped our sins upon Him as He hung on Calvary. We hunted him down; we killed Him as surely as those there did. And even today, as we come to the supper table to feast upon pheasant breast or the backstrap of a whitetail deer, we gain an inkling of that invitation to the true Table of Hospitality, where the Lord looks upon us lovingly despite our attack upon him.

Must we kill to truly eat? Apparently so. As Wendell Berry writes, “To live, we must daily break the body and shed the blood of creation. When we do it knowingly, lovingly, skillfully, reverently, it is a sacrament. When we do it ignorantly, greedily, destructively, it is a desecration.”

But in a time beyond our imagining, our souls will rise—even if the game animals we have killed will not. And in that new creation, that peaceable kingdom, we will sit and eat at the Heavenly Table, newly embodied.

The Business Like Concerns of Elizabeth Bishop and George Herbert