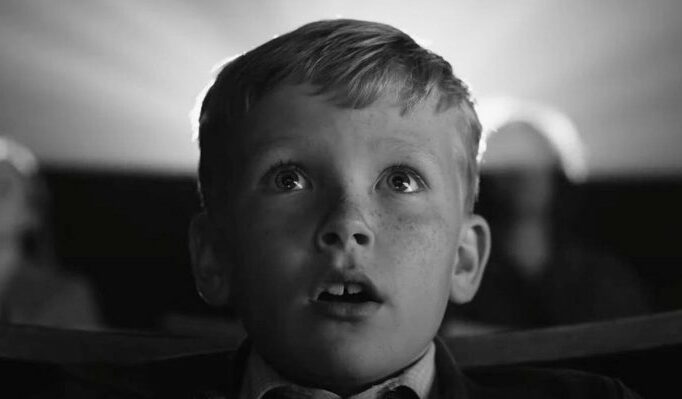 West Palm Beach, FL. One of the best lines in the movie Belfast is spoken by the grandfather to the main character, Buddy, an elementary school-aged boy. “You know who you are, don’t ya? You’re Buddy from Belfast, where everybody knows you.” Kenneth Branagh’s new movie, drawing on his own childhood experience in that city, is a moving depiction of place and meditation on belonging.

Belfast is set in the time of The Troubles in Northern Ireland. Buddy and his family are Protestant, and they live in Belfast on a mixed street. Buddy spends some of his time playing with friends, some of it falling in love with a little girl at school, and some of it dealing with the complications that come with having Catholic neighbors. All of the families on their street are friends, which is why the street has become a target for Ulster extremists. Neighbors take turns on a barricade to keep out enemies and Buddy’s father is pressured to join or pay for the Protestant cause.

Belfast depicts its world in black and white, with a strong cast and a well-chosen nostalgic soundtrack. The scenes and pacing effectively acquaint us with the city through the experiences of a child. We follow the charming Buddy and see all of the comfort that comes from belonging and being known. He has his cousins and his grandparents, his street, and his place at school. It is, in many ways, idyllic.

But staying in Belfast may not be the best thing for Buddy or his family. His father cannot find work in the country, his teenage brother is being drawn into partisan activities, boys Buddy’s age are dying for ideological causes, and the country is effectively in a civil war. His father thinks that they should leave for England; his mother is afraid to leave Belfast behind. She wants to stay where her family is. As she says, “I know nothing else but Belfast.” She worries that people won’t understand their accents and won’t accept them, but will judge them because of the violent situation that they would be fleeing.

The Belfast depicted in the film is charming and personal, but it is also a powerful shaper of identity. We see all of the benefits that come with belonging. Buddy’s Belfast is like a small town. His grandparents help him with his homework and the shopkeepers know his name. Buddy is loved and looked after. But Belfast also depicts the complications of belonging in a place that is destructive and might be best left behind. The same city that gives Buddy his identity is the one that wants to steal his innocence. Even with his family and his street, he cannot avoid the violence plaguing the city and pursuing his loved ones.

As central as place and belonging are to identity, they are never uncomplicated. It is easy to romanticize childhood or to idealize place and belonging. But some of us are from places that are further from perfect than others. We may be most known in neighborhoods best avoided or our loved ones may live in lands plagued by injustice. What risk accompanies remaining in those places?

There is something about seeing through the eyes of a child that can help us confront the complications of belonging and identity. Belfast is reminiscent in some ways of the 2019 film Jojo Rabbit, which humorously depicts the challenges of belonging to a place that can lead to perdition, in this case, the Third Reich. Jojo is a young boy who is a passionate member of the Hitler Youth and has Hitler as his imaginary best friend. His mother also happens to be hiding a Jewish girl. Jojo must work out the conflict between his belief in Nazism and the competing values quietly represented by his mother. The consequences of Jojo’s choices can be life or death.

In Belfast and in Jojo Rabbit, we see that belonging can lead to serious grief. Jojo’s ardent nationalism can make him an accomplice in the death of others or lead to his own death on the battlefield. In Belfast, Buddy and his brother are at risk of being drawn into The Troubles. While Buddy’s father warns him not to take sides, one of Buddy’s cousins calls him to join the war. These opportunities for aggression offer a powerful sense of identity, but one which will harm others and lead to moral injury for those who seize them.

It is in this way that movies like Belfast and Jojo Rabbit, and books like To Kill a Mockingbird, emphasize the importance of choosing how to belong. Buddy’s Belfast is not all bad and his parents and grandparents show ways of belonging that benefit others. In Jojo Rabbit, Jojo’s mother demonstrates that even in a very bad state, some people still “did what they could” to do the right thing, despite the consequences. In To Kill a Mockingbird, Scout watches Atticus Finch fight against the prejudice of his home town without leaving it. We cannot always choose the condition of our home place, but we have some choices about the roles we will play there if we remain.

In this season, many people are preparing to go home for the holidays. And nationally, many people are pondering the relationship between country and self. We all have choices to make. Belfast is a lovely movie for remembering the power that places have in defining who we are and the beauty of belonging well, even to a broken place. It is also a lovely movie for remembering the importance of not letting the problems of the places that we’re from find a future in us.