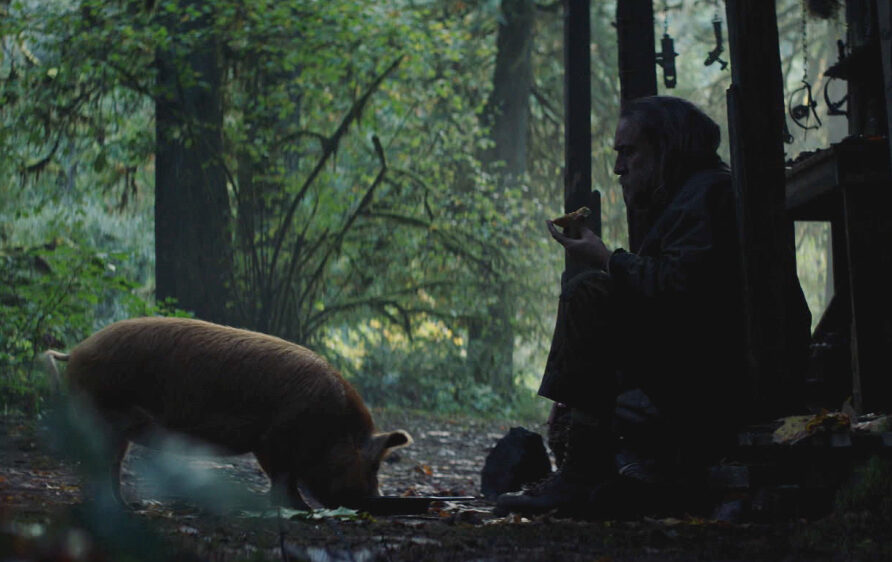 Waco, TX. I have come to discover a sort of subgenre in cinema. It is difficult to describe. With apologies to the cinema scholar who may already have a term for it, I can only fumble into my own definition. Call it “Forest Rebel Cinema.” The term “forest rebel” comes from the pen of Ernst Jünger, who in The Forest Passage depicts an anarchic type in the middle of a bleak technological world. He is not a capital-A Anarchist or given to any other -ism, instead he is so bound to his own law, so attuned with his own self, that he need not blindly follow society’s laws, nor must he transgress them. He abides in deeper realities, epitomized by the ‘forest,’ a mystical reserve ignored by the society. He is quiet but significant. Often he dedicates himself to one great task, and often he is hidden in this undertaking, for he is so content with his own freedom and devotion to the one thing needful that he skirts unnoticed by everyone else. The forest rebel is, in a word, free—in the way that those who already fulfill the law have no need of it.

Forest Rebel Cinema consists of films about these sorts of characters. Viggo Mortenson is the kind of man to play them. Werner Herzog’s documentary Happy People, an account of fur trappers living in Siberia, might be the best example—along with the rest of his work, which so often deals with obsessive, primeval types hidden in far corners of the world. For some reason, Russia often makes for a good setting (e.g., The Ister, Andrei Rublev, the aforementioned Happy People). In American cinema, some recent characters—the prickly driver Ken Miles (Christian Bale) in Ford v. Ferrari, the insatiable jazz drummer Andrew (Miles Teller) in Whiplash, the stoic Neil Armstrong (Ryan Gosling) in First Man, and the saintly Franz Jägerstätter (August Diehl) in A Hidden Life—could be considered forest rebels.

Often, the story goes that these forest rebels fall into tragedy because of themselves: they don’t play well with others; they don’t fit into society, society doesn’t much care for them, and one or the other proves their undoing. But what about when a forest rebel happens, by grace, to be unequivocally good, right, and true, and remains so to the very end, and in such a way that tragedy doesn’t play the final note? Two films of 2021, Michael Sarnoski’s quirky drama Pig and Peter Mortimer’s documentary The Alpinist, dare to tell that tale. At first glance, these movies shouldn’t resemble each other. The former follows a truffle hunter searching through Portland’s seedier parts for his kidnapped pig, while the latter follows one of the world’s greatest mountaineers who never bothered to tell anyone about it as he climbs the world’s highest peaks and flees the limelight. But both protagonists are forest rebels, physically and spiritually, and their stories suggest a yearning for the forest in the hearts of their storytellers and their audiences.

Rob (played by Nicolas Cage) lives alone in the woods outside of Portland. He searches for truffles with his pig, pays attention to the trees, cooks over the fire with a delicate touch, and only speaks to his dandy truffle dealer once a week. When his pig is kidnapped, he sets off to find it in the seedy underworld of the Portland culinary arts scene. As it turns out, he had been Portland’s legendary chef for years before disappearing into the forest. And he has a talent for memory: he remembers every meal he ever cooked, every customer he ever served, and even the employees he fired and the culinary dreams they had forsaken. We learn that he has not fled to the woods because he is aloof or spiteful but because he is grieving. He has long known what is real and necessary and what is not, and he has long lost the person most necessary to him. To struggle through that loss, he lives among the natural bounty of the Pacific Northwest.

In one of the most poignant (and funny) scenes of the film, Rob and his truffle dealer’s trail leads to the hottest deconstructed-food restaurant in town. The waitress opens the meal with neoliberal platitudes about challenging our beliefs, proving our foundations are sand, and opening ourselves to “pure connection.” Rob will have none of it, asks for the chef, and eventually comes to his own manifesto before his former employee:

Rob is blunt yet not cruel. He is even caring, as he cuts from illusion to truth for the sake of people who have lost themselves in falsehood. Sarnoski plays with the expectations of viewers accustomed to silly rampage revenge flicks like John Wick, as he lets Rob turn every possibility for violence into persuasion using the stance of his life and the talents with which he is gifted.

Three hundred fifty miles north of Portland, in a forest outside Squamish, British Columbia, Marc-André Leclerc lives in a tent with his girlfriend Brette Harrington among the ‘dirtbag’ climbing community. The only reason anyone knows about him is that the star of the Oscar-winning Free Solo, the mountaineer Alex Honnold, once mentioned Leclerc in an interview and set the documentarian Peter Mortimer on a quest to find him. He also happens to be one of the best free-solo climbers in the world, though he never promotes himself beyond inconsistently keeping up a Blogspot.

In fact he is not much for the camera: he can’t keep his eyes forward, shows little emotion besides delighted smirks, and answers questions with two- and three- word replies. Someone who, as Honnold notes, cares only about the “spiritual” experience of climbing might wax poetic and philosophical about the sublimity of the mountains or the dangers of his most terrible climbs. Instead, he is content with, “I guess that got pretty gnarly,” and a smile.

But away from the interview chair, Leclerc is goofy, fun, and enthusiastic. Brette acknowledges that he is socially awkward, but she finds it cute, and other alpinists speak of him with nothing but respect and friendliness (and a little worry). And finally, Mortimer shows us his journeys as he climbs, and climbs, and climbs again. It is beautiful to watch. As others comment, his climbing is “graceful,” even downright peaceful.

Problems come when Leclerc’s independence overrules Mortimer’s film crew. He travels to climb other mountains leaving no trace in sight. As his girlfriend tells the crew, “I think it’s so cool that you’re making a movie about Marc! But, honestly he doesn’t care about movies.” After some months, and after completing the legendary climb of the Emperor Face of Mt. Robson, he calls the film crew, and when they ask him why he left, he replies, “I’ve never let you guys actually come and shoot one of my real solos… because it wouldn’t be a solo to me, if somebody was there.” In one instant, the paradox of the documentary comes in full: you cannot film what someone must do alone. It is the infinite gulf between seeing something and being something that this modest, goofy, and talented alpinist gets across to his audience in one phone call. While the film continues with other climbs, the viewer understands that none of this is exactly the true Leclerc; one would have to meet him to know him. And as the conclusion to this documentary narrates, that is, lamentably, now impossible.

As my wife pointed out to me, one might expect such a person as Leclerc to struggle with relationships. But as his story unfolds, we see that he has loving, fulfilling, and happy bonds with his mother, his girlfriend, and those close to him. When he travels to Patagonia, he befriends locals, speaks Spanish, cooks meals, plays with children. He is content to focus on climbing and neighbor love. The only thing lacking in his personality is any care at all for records, climb times, and fame.

In this respect, Leclerc and Rob resemble each other in an uncanny way. These grizzled and obscure men know an affection the rest of us need to be reminded of. It is not hardiness or adventure that shines through in these films but rather love, love for people and places and things, and a purity of love that shows the lie of all mere appearances of it and all the calcifications of celebrity that kill it.

With this love also shines a great appreciation of materiality, for which the cinematographers of Pig and The Alpinist especially deserve praise. Both films demonstrate what steady, calm camerawork can bring: the emotion of paying attention. In the former, slow shots of Nicolas Cage’s hands preparing food delight the eyes—one wants to cook a meal after watching this film. Golden-hour pans paired with quiet and attentive shots of actors’ faces make viewers practically feel the sun shine down from above. In the latter, viewers are treated to the small aspects of climbing life: prepping gear, reading climb plans while drinking tea, hiking to the mountain base. And even as the film admits its own limitations, it impresses us with the brute actuality of mountain faces as the stationary cameras watch Leclerc slowly proceed up the cliffs.

With this love and materiality, these two films express the pure reality to which their protagonists are so devoted. In a world of frictionless unreality, endless abstractions, and tepid and timid loves, these films impress upon us resistance, difficulty, attachment, and the dire risk that attachment brings. And with risk comes failure and loss for both Rob and Leclerc. But even in these films’ saddest moments, there is not futility. Rather, a sense of mourning, gratitude, and even, if faintly, life beyond that loss imbues the conclusions to these films.

One criticism of Forest Rebel Cinema might be that true forest rebels in our day are unlikely to be savant chefs or mountaineers, great aristoi each in their own way. Rather, they will be, must be for the sake of our world, those who have dedicated themselves to the one great task of being human. And with that, being a husband or a wife, a mother or a father, a teacher or a craftsman, a nurse or a foreman. To be human in each of these vocations with the same purity and righteousness as a radical who has checked out of the world would be a hard endeavor. As Wendell Berry once wrote, the life of slow, uncelebrated work demands a “small action, but more complex and difficult, more skillful and responsible, more whole and enduring, than most grand actions.”

But this criticism of the films does not apply to either Rob or Leclerc, since their heroism consists just in their attention to small actions, affections, and lives, at the cost only of celebrity and show. It is difficult to praise that which shuns praising, but both Pig and The Alpinist manage that difficult task. And they point to a yearning from Sarnoski, Mortimer, and their audiences to learn a grand life of small action anew. Or at least it awoke that yearning in me, as I was compelled to see where in my own life I should start caring more, to whom I must devote myself further, what unreal things I must forgo to get closer to reality.

The day after I watched Alpinist, I threw away my television. And that, oddly enough for a film, is one small sign of the achievement of Forest Rebel Cinema.

Paul Kingsnorth and the Truer Path of Worship