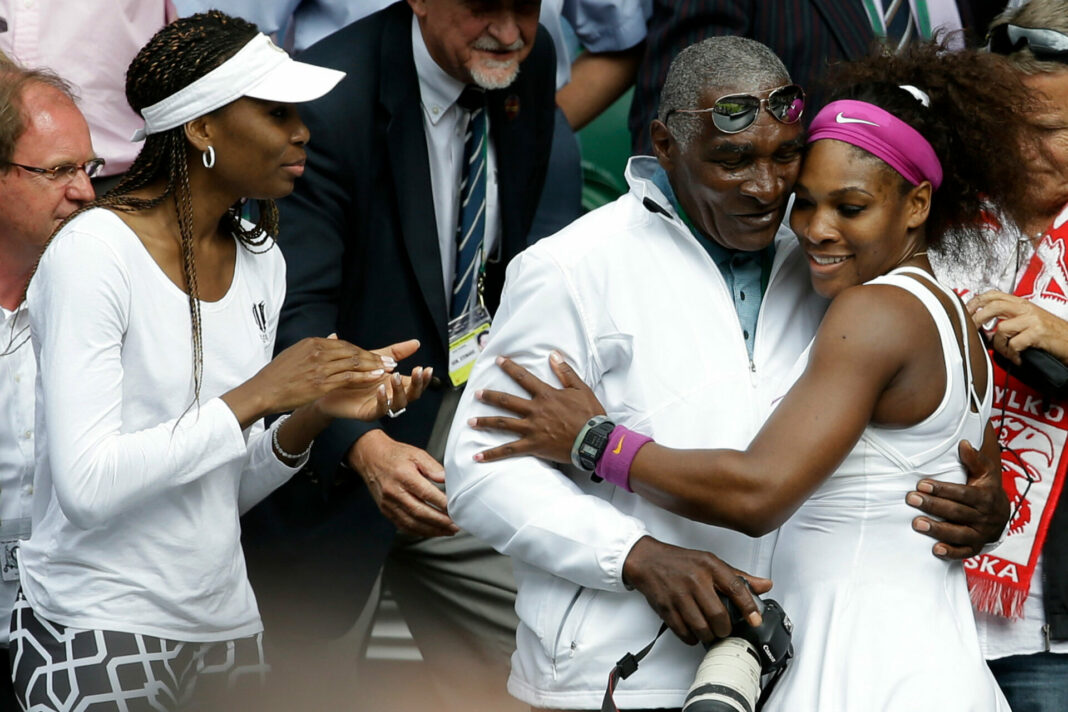 West Palm Beach, FL. This year’s U.S. Open was likely the last time that we will see Serena Williams play competitive tennis. Given her dominant role in the sport for decades, it’s hard to believe that her era is coming to an end. In Serena’s career, as sports commercials are prone to saying, we have been “witnessing greatness.” Serena Williams stormed onto the scene as a player with a remarkably powerful serve and is now the greatest tennis player of all time. But her career has also borne witness to the incredible power of family.

In 2006, David Foster Wallace wrote a column, “Roger Federer as Religious Experience,” for the New York Times. The article explores the beauty that exists in peak athletic performance and the ways in which that beauty can offer the spectator a transcendent experience. Wallace writes, “The human beauty we’re talking about here is beauty of a particular type; it might be called kinetic beauty. Its power and appeal are universal. It has nothing to do with sex or cultural norms. What it seems to have to do with, really, is human beings’ reconciliation with the fact of having a body.” Whatever the sport, for aficionados, seeing a performance that is at the peak of human ability can be profound. It can make us marvel at the nature of our existence.

When a fan is absorbed in the performance of a great athlete, the rest of the world can seem to fade away. Watching Roger Federer we might forget the limits of human ability. As Wallace says, “The metaphysical explanation is that Roger Federer is one of those rare, preternatural athletes who appear to be exempt, at least in part, from certain physical laws.” The athlete might seem to ascend and leave the world behind. Watching sports, we often temporarily forget some of our troubles. We can even fail to hear the other people in the room with us. But one of the most intriguing things about Serena Williams is that despite also being one of those rare preternatural athletes who can do unthinkable things, we have always been aware of who is in her box. As much as her abilities separate her from ordinary people and from her opponents, her greatness has never obscured her connection to her family. Her human relationships never seemed to fade away.

From the beginning, we have always associated Serena with her family. We became aware of her as Venus’s little sister—and who could believe one family would have two such talented tennis pros? But even more than as a sister, we saw Serena as the daughter of her father. Richard Williams is himself a force of nature, who seemingly willed his children to success, despite circumstances. The early days were recently chronicled in the film King Richard, but even after both his girls were on tour, he was almost always present and served as their coach for years. So often on the sideline, sometimes in the news, he was not always the easiest person to have around. He was very determined and sometimes difficult.

Many athletes have strong parents. Quite a few athletes have put considerable distance between themselves and family. But even when she moved on to other coaches and even when her father was no longer omnipresent, Serena did not give us cause to suspect that she did not have real love for her father. She and Venus were at the premiere of King Richard, which celebrated him but also portrayed him as fully human. And after her final match, Serena acknowledged her parents in her interview: “Thank you Daddy, I know you’re watching. Thanks, Mom… it all started with my parents and they deserve everything. So I’m really grateful for them.” He was never someone she had to overcome. His strength did not detract from hers.

There are few athletes whose families of origin we think we know much about. Celebrity athletes may post about their spouse or children on social media, but so rarely do we know much about their parents or siblings. Who knows if Federer has siblings? What is Nadal’s father’s name? You’d have to be a very serious fan to know. Who knows that Serena has sisters? Everyone knows. The significance of family has always been at the center of the public’s awareness of Serena. There is something profound in that.

After thanking her parents, Serena emphasized the importance of her sister in her life: “And I wouldn’t be Serena if there wasn’t Venus. So, thank you, Venus. She’s the only reason Serena Williams ever existed.” If Serena’s relationship with her father has always been a reminder about the value of family, the dynamic between Venus and Serena is even more a revelation about the possibilities within human relationships.

Venus Williams is an incredibly talented tennis player. She went professional at the unbelievable age of fourteen. She has won seven Grand Slams. She has won Wimbledon five times. In the 2000 Olympics, she won the gold medal in singles and then also won the gold in doubles, with her sister. For many years of her career, her sister seemed to be her only significant rival. In fact, if not for Serena, this would likely have been the era of Venus. And yet, she has been Serena’s constant supporter. We never doubted that she would be in Serena’s box for that last match.

The rivalry between Cain and Abel led to bloodshed; the rivalry between Venus and Serena has been a thing of beauty–not necessarily in matches played, but relationally. Many people would not have done so well managing the ascendancy of a sister when that meant their own greatness would be so often overlooked. Few people know how to manage sibling competition well, much less when it is televised and incentivized and rewarded with trophies. And however hard it has been, they have remained each other’s supporters and encouragers. Asked about her own career and motivations in this year’s U.S. Open, Venus downplayed herself and indicated that she was happy to be playing doubles with her sister because Serena wanted to do it one last time. Love is not self-seeking.

Serena and Venus Williams are famously from Compton. It is the beginning of their well-known origin story. But they are also, very obviously, from their family. And as far as they have traveled, they have never left their family behind. Serena’s career has been a feat of athletic prowess, but it has also been a testimony to the place and purpose we can find in and with our families. Few other athletes have shown us that so well.

In her sport, Serena has shown us transcendent play. There are moments we will long remember, feats which outlined new possibilities. But Venus’s love for her sister, and Serena’s recognition of it, has also shown us the transcendent power of family, the possibility of forgetting the accolades and the worldly recognition and the desire for advantage and finding instead deeper connections and possibilities of love. Hopefully this is something we never forget from either of their careers.