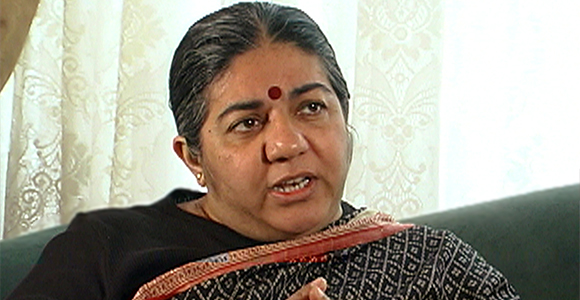 LEXINGTON, KENTUCKY. One of the structural evils of our two-party system and our editorial pages is the inherent bias of both towards two.  If not A, then B.  If not Pro, then Con.  If not Left, then Right: one must be one or the other.

But in the real world, no thinking person lives like that.  Labels and diction should never blind us to who our friends are.  And so from my paleoconservative stoop I write today to make a pitch to include an Indian ecofeminist on our front porch.

Vandana Shiva is well worth discussing here.  Like most good people, and for all that she identifies herself with the Left, she cannot truly be pigeonholed politically.  She is bigger than that.  Or, as Chesterton taught us to boast, she is smaller than that.

The daughter of a forest conservator father and a farmer mother, Shiva is an Indian physicist whom in 1984 watched the riots in the Punjab and asked herself, why has the Indian state that benefited most from the Green Revolution become so violent?  Why (as she still says) does agriculture look more like war?

A month later came the Bhopal disaster, and she has never looked back.  She transformed herself from an academic into a farming and environmental activist, and a polemicist on how rightly to live.  Shiva started the Research Foundation for Science, Technology and Ecology in her mother’s cowshed in Dehradun, and in the years since, she has acted as an advocate for Indian small farmers and an opponent of industrial agriculture, and specifically its pressure to use Bt-infused and herbicide-resistant seeds.  Something of an éminence grise now, she was at the University of Kentucky earlier this month to deliver their second Sustainability Lecture.

Shiva is a believer in local control over local resources for the benefit of the people who live there.  She argues with great clarity about the links between world trade and the destruction of biodiversity and good soil in India, the twisting of words to serve powerful corporations, and the necessity of refusing to allow life itself to be held hostage to a patent and a price tag.  One of her books is entitled Monocultures of the Mind, and no one argues more persuasively about the connection between biodiversity, human cultural diversity, and political freedom.  As she writes in Biopiracy, “Globalization is not the cross-cultural interaction of diverse societies; it is the imposition of a particular culture on all the others.”

She is interested in practical work as well as arguments.  In recent years her organization has trained tens of thousands of Indian farmers–who have needed training to learn to grow, among other things, their traditional dals. For a country with millions of vegetarians and millions more poor, these are essential protein sources and ancient crops.  But as farmers have moved to cash crops, monocultures, and patented seeds, “five thousand years of cultivating memory has been lost in one generation,” she says.

Her Navdanya organization saves and shares seed from over 40 seed banks across India.  It also conducts studies on the productivity of the new patented crop varieties and their effect on soil (see their latest report here).  There is a research farm in Uttranchal, too, where her colleagues are growing hundreds of varieties of edible and medicinal plants.

All of this, plus her books and her cheerful doggedness in debating and campaigning against agribusiness giants and their proponents in international bodies such as the World Trade Organization, has made her a prominent figure worldwide.  But like most true farming advocates, she is interested in the well-being of the land because she is interested in the well-being of the people who live from it.  It was the deaths in the Punjab and at Bhopal that got her started, after all, and she frequently mentions the high rate of suicide among farmers growing Bt cotton (they fall into debt, and then despair).

What does she have to say that applies to the U.S.?  Nearly everything.  The seed companies (Monsanto, Cargill, Syngenta) are the same.  The effects of their seeds on soils are the same.  And the loss of farming knowledge is perhaps an even greater danger in this country, where so few farm children are continuing in their parents’ calling.  Farming demands observation, experience and skill; it is not a menial activity, and not just anybody can do it.  Nor are ag schools taking up the slack—not yet.  The University of Kentucky has a brand-new organic farm (which I have not seen), but all its emphasis up to now has been on agribusiness techniques that demand big equipment, petroleum-based fertilizer, lots of water, and debt.

Among her other virtues, Vandana Shiva is sensitive to the way language affects our thinking about what we do.  At UK she told the audience that we have found ourselves in a place where “we don’t grow food, we grow commodities.”  The result?  “We are trading in nutritionally deficient food loaded with toxins. Food is what organic farmers grow.  The rest is rubbish.”