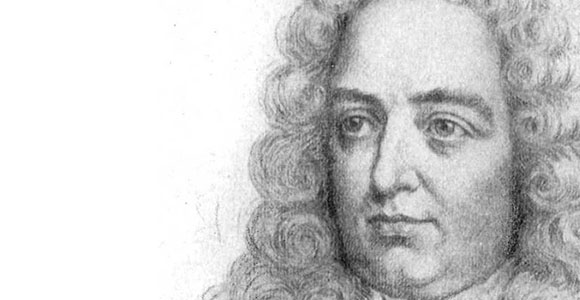 It’s a little-known fact that many of our finest writers owned time machines and paid frequent visits to the future. Furious John Ruskin (1819-1900), for example, that mad critic of industrialization, surely must have passed through the inner circle of Bentonville, Arkansas, sometime during the Reagan years, in consequence of which he said, “there is scarcely anything in the world that some man cannot make a little worse, and sell a little more cheaply. The person who buys on price alone is this man’s lawful prey.” *

Likewise, that harmless drudge Samuel Johnson (1709-1784), who spoke of those “eyes [that] discern afar / The secret ambush of a specious prayer,” was obviously among us as recently as last summer, observing all the Jeezus-soaked nut-jobs laying hands on gas pumps and imploring their Personal Savior (who has devolved of late into something like a Supernatural Step-and-Fetch-It) to cut them some slack and shower his favorite people with some petro-vouchers.

And who could doubt that the diminutive smirking Alexander Pope (1688-1744) was reading up on the “unforeseen” consequences of industrial farming—for example, the hypoxic zone in the Gulf of Mexico—when he wrote, “From Nature’s chain whatever link you strike, /  Tenth or ten thousandth, breaks the chain alike.”

So only the most credulous empiricists among us could doubt that Jonathan Swift (1667-1745) has been lurking about recently, writing down his observations on the American economy to take back with him to the 1720s.

It is to the 1720s, of course, that “A Modest Proposal” belongs, that splendid piece of unrelenting irony in which Dr. Swift’s Proposer, having studied carefully the abject penury of the Irish, rejects sound economic solutions—taxing the hell out of absentee owners, buying local goods, reducing dependence on foreign suppliers, reigning in gamblers, and practicing thrift, honesty, industry, and skill—and instead recommends that his fellow Emerald-Islanders raise and fatten their children for slaughter—like meat hogs.

But before Dr. Swift put the final touches on that economico-culinary masterpiece, he knocked out several tracts and sermons on the problems of the Irish economy, which his study of ours obviously prepared him to identify. †  Now I don’t expect us to learn anything from his time travel, but we can certainly enumerate the many things he learned. I single out only five:

Place matters.  So does loyalty to it: “[one] cause of our miserable state is the folly, the vanity, and ingratitude of those vast numbers, who think themselves too good to live in the country which gave them birth, and still gives them bread, and rather choose to pass their days, and consume their wealth, and draw out the very vitals of their mother kingdom, among those who heartily despise them.”

Turning luxuries into necessities is a bad idea, even if you are a moronic woman: “[another cause of our miserable state is] that monstrous pride and vanity . . . especially [in] the weaker sex, who, in the midst of poverty, are suffered to run into all kind of expense and extravagance in dress, and particularly priding themselves to wear nothing but what cometh from abroad, disdaining the growth or manufacture of their own country.” (Recall Gulliver: “I assured him that this whole globe of earth must be at least three times gone round before one of our better female Yahoos could get her breakfast, or a cup to put it in.”)

And it’s an even worse idea if you’re a moronic man: “neither are the men less guilty of this pernicious folly, who, in imitation of a gaudiness and foppery of dress, introduced of late years into our neighbouring kingdom (as fools are apt to imitate only the defects of their betters), cannot find materials in their own country worthy to adorn their bodies of clay, while their minds are naked of every valuable quality.”

The local economy must have priority: “our tradesmen and shopkeepers, who deal in home-goods, are left in a starving condition, and only those encouraged who ruin the kingdom by importing among us foreign vanities.”

Idleness in children is ruinous to households and communities: “whereas in all industrious nations, children are looked upon as a help to their parents, with us, for want of being early trained to work, they are an intolerable burthen at home, and a grievous charge upon the public.”

Now Dr. Swift was a sublime critic, to be sure, and a superb satirist as well, but he didn’t deal only in criticism. He also had some good reminders and suggestions, also gleaned from his forward jaunt into this vale of fears:  “I shall only enumerate by rules generally known, and never contradicted,” he wrote, “what are the true causes of any countries [sic] flourishing and growing rich.”

And, again, I pass along only a few. A nation flourishes when:

. . . it takes care of the topsoil: “The first cause of a kingdom’s thriving is the fruitfulness of the soil, to produce the necessaries and conveniences of life, not only sufficient for the inhabitants, but for exportation into other countries.”

. . . it limits absenteeism: “[another cause of a kingdom’s flourishing] is the residence of the prince, or chief administrator of the civil power. . . . We are so far from having a king to reside among us, that even the viceroy is generally absent four-fifths of his time in the government.”

. . . it makes the things it needs: “[yet another cause] is a disposition of the people of a country to wear their own manufactures, and import as few incitements to luxury, either in clothes, furniture, food, or drink, as they possibly can live conveniently without.”

. . . it knows the dangers of abstraction: “we are in the condition of patients, who have physic sent them by doctors at a distance, strangers to their constitution and the nature of their disease.”

It’s all very uncanny. The Reverend Dr. Swift put his ruddy all-probing finger on several of our worst maladies: upward mobility, contempt for the places that sustain us (doubly detestable in those who have “risen” from such places), outsourcing, enslavement to fashion, which is naught but the Tyranny of the Next Thing, and the habit of raising children to do nothing more productive than sit on their Frito-fed fannies until the entertainment industry has successfully amused them into an intellectual indolence exceeded only by their physical inertia.

And Dr. Swift also saw what needed doing: taking care of the soil, avoiding abstraction, especially in ownership but also in leadership, providing for ourselves, and solving problems with solutions suited to individual places—that is, seeking local wisdom.

Obviously the Dean of St. Patrick’s has been here lately, hiding behind the bushes, observing our follies and thinking about how he might subject them to ridicule.  No doubt perusing FPR as well. Too bad for Dr. Swift that when he arrived back in Ireland almost 300 years ago his darkest suspicions were confirmed: man, it turns out, is incorrigible. He uses reason only to increase his vice.

But we’re in a different kind of position. It’s true we’re neither good enough nor smart enough voluntarily to make the changes we obviously need to make, but at least we’ve figured out how to create the catastrophes that will force us to make those changes.

* The quotation, so far as I know, is only attributed.  Ruskin should have said it if he didn’t.
† I quote from two tracts, A Short View of the State of Ireland (1727) and “Causes of the Wretched Condition of Ireland” (1726)