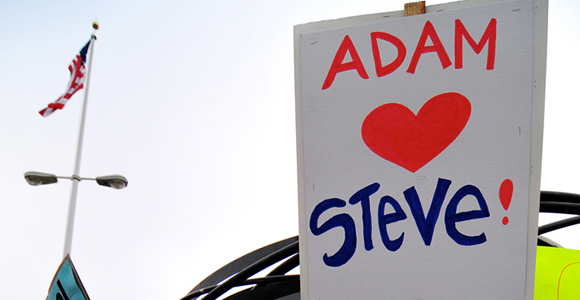 OWEN TOWNSHIP, WINNEBAGO COUNTY, ILLINOIS: According to one legend, the word Iowa means “Place of the Drowsy Ones” in some extinct Indian tongue. This came to mind yesterday when the Iowa Supreme Court ruled unanimously that same-sex couples have a constitutional right in that state to marry. No drowsy ones in that courtroom! (In the interests of full disclosure, I should note that I played a small part in this court case. I was called as a witness for Polk County, the defendant, and asked to provide evidence that the intact, heterosexual marriage delivered socially, politically, and personally constructive results. After I was deposed for the better part of a day by Lambda Legal Defense Fund– actually something of a gratifying experience for my questioners had apparently read EVERYTHING I had ever written–the trial judge ruled my testimony inadmissible: I was a social historian, he noted, not a number-crunching sociologist… only the latter could provide relevant truth.)

Actually, I wasn’t deeply surprised by the Court’s decision. It has become increasingly clear to me that we heterosexuals bear most of the blame for the sorry state of marriage today. Over the last 50 years, we’ve accommodated ourselves to no-fault divorce, the intentionally childless “companionate” marriage, a pervasive “contraceptive” culture, and the virtual legal equation of cohabitation with marriage. “Same sex marriage” is simply the next logical step in this deconstruction of a once-Christian institution.

My real sadness is over my native state, the Place of the Drowsy Ones. During the days of my youth, it was a different land. Politically, both houses of the state legislature were apportioned mostly by county… or land, with Des Moines, Cedar Rapids, and one or two other cities having one extra seat in the Lower House. This “undemocratic” arrangement gave a huge advantage to farmers and the small town folk who defined the distinctive culture of Iowa. Politics was radically decentralized: weak governors with two-year terms; a legislature that met briefly only every other year. And yet, vice was kept under strict controls: gambling prohibited; liquor-by-the-drink only in private clubs; the beer…3.2 %; other intoxicants only to be found in carefully hidden state liqour stores that resembled opium dens; and mandatory store closings on the Sabbath.

The U. S. Supreme Court brought democracy to Iowans in the mid 1960s through decisions mandating legislative representation by population only in both chambers. The result?: city people crafted a new Iowa, featuring casinos, race tracks, state lotteries, “liquor by the drink,” strong beer, and wide open Sunday commerce. A few years ago I half-jokingly complained to a shirt-tail relative who’s a lobbyist at the Iowa legislature that the state seemed to have formally embraced every form of vice except prostitution. He replied that a bill to legalize “the oldest profession” was in fact under consideration.

Now, like most of my colleagues on The Front Porch, I appreciate a glass of wine or two with my dinner. And having the stores open on Sunday has been a convenience, at times. Yet I wonder if the old Iowa—a place ruled by farmers and culturally defined by the intensely communitarian small town– was actually of one piece, a coherent, mostly Christian (and predominantly Protestant), agrarian society that could not survive too many changes; and that the price of living in such a world was—and is—accepting certain restraints, including legal restraints, on one’s appetites. If “same sex marriage” follows logically from the intentionally childless, companionate marriage, does it also follow logically—at least in the case of Iowa—from liquor-by-the drink?

You Say Liturgy, I Say Lechery