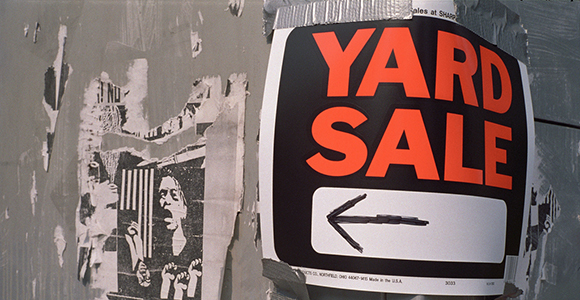 Russell Arben Fox remembers well his thrifty grandmother, and so do I, and so do you, perhaps.  For the rest of the nation there is Amy Dacyczyn of Leeds, Maine, the founder, publisher, and primary author of The Tightwad Gazette.

She deserves an honorary degree in economics from Johns Hopkins, for the practical applicability of her work, but what is more prosaic, square, and lower-caste than housewifery?  Still?  And despite the best attempts of Berry, Pollan, Smith and MacKinnon, Kingsolver and the occasional feminist to dignify some aspects of home economics?  Farming and gardening have a certain earnest cachet, at least.  Hanging the laundry in the attic to dry does not.

Mrs. Dacyczyn (pronounced “decision”) started her newsletter in 1990, and very soon found herself on national television as the voice of thrifty America.  She published for six years, and then one day, when she felt her work was finished, she hung up her mouse and returned to private life.  In (rare) interviews since she has said it was a relief to get out from under the pressure of writing, and to return to anonymity.  She’d had a few years of a Today show kind of fame, and hadn’t particularly enjoyed that part.

Though journalists like to cite her more offbeat suggestions (the hammock made out of plastic six-pack rings), her main techniques for saving money and resources are logical, practical, largely invisible to the casual visitor and would have been familiar to Russell’s grandmother.  Keep a cost book, so you know where and when your household staples are cheapest.  Grow a big garden, and preserve the food.  Shop at yard sales and thrift stores, and for children especially, buy a year or two ahead, so you have school shoes when you need them.  Reduce, reuse, recycle.  All of this is easy to list and to remember, and some of it is obvious.  It’s the consistent application of her advice that’s difficult, as tenacity is always difficult.

I admire several things about Mrs. Dacyczyn—among them her doggedness in researching answers to her questions (she was an excellent reporter) and her willingness to work at her writing despite, apparently, never liking the work and not being a particularly bookish person.  She is a cheerful fanatic about saving, but then her enjoyment of it takes all the sting out of her fanaticism.  And as any self-imposed limitation does, hers forced her to be creative.

Finally, as I mentioned, there was that in her which made her welcome the day when she walked away from her public life.  How many Americans would willingly do that?  But she had said all she could usefully say, and had a shed that needed painting.

With the downturn in our economy, I keep thinking perhaps I will open my increasingly thin newspaper and find a mention of her that points toward a possible nationwide resurgence of Dacyczynism.  No luck yet.  Media-addicted as we are, all movements in this country require a face.  No publicitee, no publicity.  So I tip my hat to her here, in the heartfelt but not-very-sanguine hope that every economic sage who gabbles on about spending our way out of recession, as though macro-economies are not bound by the same limitations of time, space and resources as our households are, would dream of giving a speech at Harvard, where America’s destined next generation of GE executives would choose instead to hoist and throw at his head a thousand copies of The Complete Tightwad Gazette.  To be retrieved afterwards.

Allowing a Little More Room for Subsidiarity: A Review of Adrian...