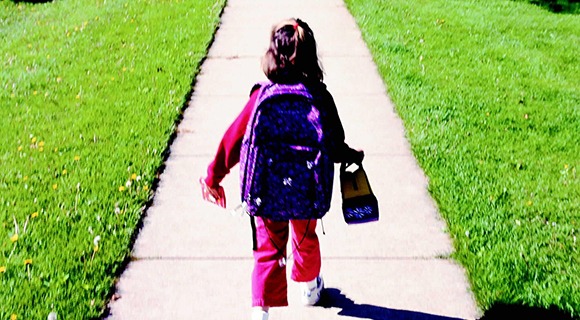 Wichita, KS
I was born in 1968, and my childhood was the 1970s. My family lived, during those years, in five different homes (all in the same county, though, so it’s not like we were moving great distances…just trying to find a place to stick my parents’ growing brood), and I attended, by my count, five different elementary schools in two different school districts. When the time came for me be sent to our local junior high school, I usually rode the bus there and back; and when the time came for me to attend high school, I was catching rides with my older siblings or driving myself. But elementary school? I walked or rode my bike to school–which was sometimes less than a half-mile away, sometimes two, and for a couple of years about five miles away–just about every single day when the weather permitted…and sometimes even when it didn’t.

I happen to think that there is something important to that, something that might even be considered a little revolutionary today. Years ago I was drawn into a discussion of just this topic, a discussion that involved a couple of other blogs as well, and what I found is that how one answers this simple question–“why don’t kids walk to school anymore?”–opens up any number of cans of worms: family size, socio-economic status, public school funding, zoning laws, parenting styles, the rural-urban divide, and on and on. This is how I put it back then:

The responses [of those attempting to answer the above question] are numerous and revealing: fear of crime (real, sometimes, but mostly imagined), poorly designed neighborhoods without sidewalks, loss of cross-walk guards and other services, heavy backpacks, addiction to driving, overprotectiveness, insanely busy schedules, obesity and laziness, two-career families for whom the drive to school is the only real opportunity for parents to interact with their children one-on-one, etc. What I personally found most interesting was the flavor of many of the comments….if you read them closely, you can see language straight out of the conservative playbook: “times have changed,” “kids today don’t know how to play,” “things really were different back then,” etc., etc. Some of the commentators try to tie this into their general anti-Republican political orientation, but most just let their complaints stand alone mournfully.

I can sympathize, but I also wonder at the sociodemographics at play here….[T]here was a time when I fiddled with the idea of writing an essay titled “When Generation X Sends its Kids to School.” Not surprisingly, I started thinking about this when our oldest daughter started kindergarten, and Melissa and I felt ourselves surrounded, overwhelmed, by advice and strategy and counsel about how best to educate our little girl, and how to keep her productive and safe, and which schools would offer what and how much, and what we should fear and how we could be ready to overcome or circumvent it. We felt baffled and distracted. A lot of it was our own doing, of course–first child going off to school and all that. There was a fair amount of class and regional anxiety involved too (lower-middle-class family, breadwinner just out of graduate school, leaving the big city for a for a one-year position at a university in a poor part of the deep South). But above and beyond it all, there was something down deep that Melissa and I both felt: that the education of children in America–both in and out of school–has become in the public mind a very big, very important, very delicate, very nerve-wracking affair, when really, it probably shouldn’t be. This is not to ignore the very real problem of failing schools or dangerous neighborhoods or anything else; we we’re fully aware of that. But the high-pressure, time-sensitive, goal-oriented world of today’s public schools felt very odd to us, and not a little bit wrong.

I realize that this is much too heavy-handed a generational stereotype, but maybe those in their 30s today remember a time when neighborhoods were (more or less) intact enough, and teachers were (more or less) trusted enough, and the streets were (more or less) safe enough, and families were (more or less) stable enough, to allow children–namely, us–larger amounts of time, space, and responsibility. Bike to school. Be home by dark. Catch the bus downtown. Climb a tree. And so forth. This sensibility does solidify, for many of us anyway, a real discontent we have with a social world that (for economic and cultural reasons) has been so mercilessly measured and surveyed and risk-assessed. Not long before our experience with Megan, I’d read David Brooks’s extremely depressing (for me) article on “The Organization Kid“–the child of baby boomers who has been prepped and watched over and groomed to excel. Heavy backpacks and programmed time with the parents forms the basis of this type of person’s interaction with the world. The parents of my generation, on the other hand–the older siblings, perhaps, of those who rebelled (my dad listened to Elvis in high school, not the Beatles)–somehow missed out on the need to change the world, and the micromanagement it (not doubt unintentionally) entails. And they raised us to be slackers. A bad thing? In some ways. But if I can somehow make sure my daughters have the power and opportunity to slack off–to find their own way, make their own mistakes, develop their own little world, perhaps all while taking the time to walk to school–in the midst of this high-pressure, paranoid world, I’ll feel that I’ve done some good.

Walking to school sounds like, well, work, especially if one can catch a ride. But actually, walking to school–and the temporal, social, cultural, economic environment is presumes and contributes to–is in a very real sense lazy, at least in a world of organization, because it requires no organization: just two working legs and the basic knowledge required to cross on the green light. There is a real and significant theoretical point to “slacking off” in the face of meritocratic, organized, time-sensitive world, to refusing to carry a Blackberry (as Laura McKenna wisely put it in one of her rants (and which I further commented on): “corporate life is the enemy of the modern family”) and insisting that whatever work you do, whatever deadline you have to make, whatever seasonal imperative you’re committed to, your family and your life as an human being is not something that belongs, in a fundamental sense, on the clock. Take the time to walk; it’s a form of dissent.

Of course, by dissenting you’re also engaging yourself in larger questions, questions that need to be a part of ordinary individual, family, and community life, but which so often we moderns fail to engage in, leaving such issues to be addressed those with vested (usually business) interests. Questions about collective action, neighborhood government, and public goods. Why aren’t there sidewalks along our street? Where does the spill-over parking from the new Wal-Mart really go? Who decided on these speed limits? Pausing for a moment–or just giving it some thought as you walk to your next destination, rather than going on the usual brain-dead automatic as you fight traffic and Tweet someone on your cell phone–leads to the realization that the assumption that everyone drives everywhere is going to affect the homes available to buyers, the parks and open spaces available to take your family to play in, the friends that your daughters will be able to make at school. And as for those friends…as the father of four girls, with the aforementioned oldest daughter now on the cusp of teen-agerhood, I’m getting it all the time. We’re slowing her down, that’s what folks say: she doesn’t have a cell phone, we make her walk to school, we’ve got to pick up the pace! Do we want her to “fall behind”?

Well, no…and yes. I’m enough of a modern American to embrace the idea of pursuing opportunities when they present themselves to you, and if said opportunities might involve extra time and effort and attention on my part, as a loving father I’m going to provide those for my children; I won’t slack off in that regard. But once again, I think there needs to be some limits, and a lot of those limits are best realized by way of simply thinking of what a normal human being can do, in a normal day, without attending to the hyped-up, commercialized, technologically enabled, impatient, entitlement-oriented speed which surrounds us. Maybe we won’t drive our daughters all over town to every party and every lesson and every tutor available to her, simply for the sake or organizing her life around fun and accomplishment. Maybe–as I said in another one of those wonderful discussions which Laura keeps hosting, this one dealing with cell phones and teenagers–my wife and I have come to the unspoken agreement that for as long as possible, as much as possible, we are going to instruct our kids in the value of just plodding along and dealing with the inconveniences and limits of human life as they come, rather than looking for ways or for tools which will hasten their ways around or beyond them (and, too often, at too young an age, beyond us, the parents who, “slackers” though we may be, are hopefully not slacking off on our responsibilities). It’s a form of Luddism, I know, but we tend think that too much ordinary common sense–the sort of bourgeois stuff that comes from slowly accumulating life skills and lessons–can potentially be lost if young people are, on the one hand, fast-tracked into worlds of high-tech meritocratic accomplishment, while on the other hand, still feel themselves tethered to parents to deal with real world problems (like when the computer crashes). Cutting down on the former–by, for example, doing all you can to be able to make the choice to buy a home in a neighborhood where they can walk to school and church, and then expecting them to do so–can, coincidentally, teach them a little bit of real responsibility and self-reliance, and thus increase their ability to deal with the latter on their own.

What’s that–the hypocrisy accusation? Well, it is true we own a cell phone–one; my wife carries it. Perhaps we’ll get another, family phone for latter on, once our oldest learns how to drive. But that’s a few years away yet. Take it slow for now, is what I say. Slack off, dissent, turn off the tv, and walk to the park (or ride your bike; in truth, that’s my preferred method of travel). Sure, it’s a whole mile away. But it’s not raining…and the time away from the beeps and whistles of modern life will do you a world of good.