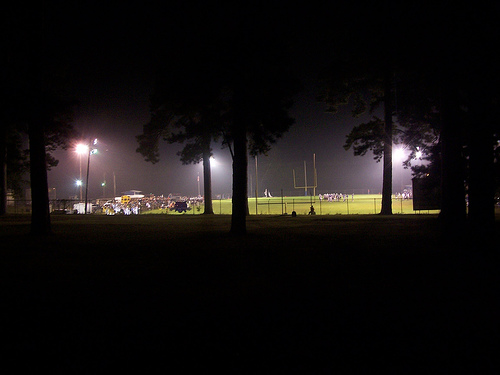 JEFFERSON COUNTY, KANSAS.  The review below was first published in the Intercollegiate Review in the fall of 2006.  Look Homeward, America was my first introduction to the work of the man who currently holds (until he falls out of it) the Endowed Rocking Chair (the one closest to the sideboard) and the honorary appointment of Cuss in Residence on this Porch.  It is not too much of a stretch to say that Look Homeward, America and the small group of people drawn into its orbit—including myself and our fellow porchians, through the good work of Jeremy Beer—prepared the soil for this current work.  So as an early marker of the porchian creed, or anti-creed, I offer the following …

It is an occasional convention in conservative literature to talk about the “real split” in the world that animates contemporary political and cultural disagreements, a split deeper than the more pedestrian divide of Republicans versus Democrats. Russell Kirk liked to quote Eric Voegelin’s remark that the “great line of demarcation in modern politics…is not a division between liberals on one side and totalitarians on the other.” Rather, it is between materialists who recognize only a temporal order and those who admit to a higher, transcendent order. To Voegelin, liberals and totalitarians of various stripes were essentially alike in their progressive materialism, the price of which was “the death of the spirit.”

In this he concurred with Alexander Solzhenitsyn, who in his famous 1978 Harvard Address, referring to Western liberalism and Eastern communism, said that, “The split in the world is less terrible than the similarity of the disease plaguing its main sections.” For Solzhenitsyn, the disease plaguing both sides was the belief that man’s chief task was to “search for the best ways to obtain material goods and then cheerfully get the most out of them.” More recently John Lukacs described the real split in America as being between “progressives” (more often than not misnamed “conservatives”) and “conservationists.” “It is the division between people who want to develop, to build up, to pour more concrete and cement on the land, and those who wish to protect the landscape (and the cityscape) where they live.” It is the divide between those who cultivate a “true love” of their country and those with only a “rhetorical love of symbols such as the flag, in the name of a mythical people,” between a home-loving domesticity and a wandering nomadic life, “between the ideals of stability and those of endless ‘growth.'”

In Look Homeward, America, Bill Kauffman offers a detailed and often idiosyncratic look at the “real split” underlying American society and politics. To paraphrase Gore Vidal, one of Kauffman’s unlikely heroes, that real split lies between those who love the old American republic and those progressive dreamers who would sell their patrimony for a bowl-full of the centralized, mechanized American Empire. Be forewarned: this is not a book for those seeking confirmation of their already accepted political stereotypes. Rather, Look Homeward, America is Kauffman’s quest through American history and its living landscape to find those he lovingly calls “reactionary radicals and front-porch anarchists.”

The result is, by design, impossible to categorize. Kauffman’s collection of throwbacks and throwaways, retreads and retrofits, hillbillies and hell-raisers, poet politicians and insubordinate patriots is a stinging rebuke to political categorizers, taxonomers of the soul, and those who reduce humanity to the talking heads and soundbitten ghosts of American punditry. Kauffman describes himself as an “outsider even among outsiders” and “the love child of Henry Thoreau and Dorothy Day, conceived amidst the asters and goldenrod of an Upstate New York autumn.” His is a Middle American, profoundly un-imperial patriotism based in love of American music, poetry, quirks and commonalities, historical crotchets, holy fools and eminent Kansans.

I celebrate, I affirm old-fashioned refractory Americanism, the home-loving rebel spirit that inspires anarchists and reactionaries to save chestnut trees from the highway-wideners and rural schools from the monstrous maw of the consolidators, and leads along the irenic path of a fresh-air patriotism whose opposition to war and empire is based in simple love of country.

This is what binds Kauffman and the subjects of Look Homeward, America together: their unbought love of home, of their own patch of ground, of their communities and the heritage of their region.

Kauffman is an exuberant guide on this joyous head-trip across the country roads of American politics and culture, and along the way everything you thought you knew about what it means to be a patriot, a conservative, or a Christian will be turned upside-down and inside-out. And as with travel on a country lane, the ride is slow, the details are savored, the conversation is a delight, and the destination is not the fruitless, rootless, nowhereness of the freeway (“I’m outta here!”), but instead the welcome embrace of a large front porch and a place called home.

Not home in the deracinated sense of wherever you happen to hang your hat. Kauffman defends and describes an older and more robust concept of home as an entire social realm that is dominated neither by the state nor by the desires of a random assortment of individuals. Home in Kauffman’s telling encompasses not just the front porch (an apt symbol for his vision), but all of the highways and byways that weave together the strands of memory, kin, church, work, craft, and play into a place of belonging. Home in this sense is and ought to be experienced as the focal point of man’s material existence in contact with a transcendent God, with the divine and holy ground of being.

Among those embraced by Kauffman as reactionary radicals are politicians like Eugene McCarthy and political operatives like Karl Hess; poets and farmers such as Wendell Berry and regional artists such as Grant Wood and John Steuart Curry. Under examination Kauffman shows the pacifist, distributist Catholic Worker Dorothy Day, with her defense of rooted tradition, to be a far more reliable conservative than Henry Kissinger, the man honored at a gala by National Review a day after Day’s death. In a similar reversal we discover that the feminist and liberal icon Mother Jones “detested the middle-class reformers who sought to transfer household functions to the market or the state. She suspected that capitalists were scheming to force women into the paid labor force and children into daycare, and the prospect did not please her.” Kauffman compares Jones to Lamar Alexander, who made his fortune and rose o power as an executive with Corporate Family Solutions, Inc., operating nearly one hundred high-powered daycares for Fortune 500 companies. “Making millions off daycare—separating infants from mothers for eight hours a day, five days a week: as the abortionist says whilst laving his hands in disinfectant, ‘It’s a living.'” Kauffman’s dry response: “Mother Jones or Lamar Alexander: you tell me who’s the real conservative.”

One of the great pleasures of Look Homeward, America is to see Kauffman’s righteous pen turned against these putative conservatives and other homewreckers, concrete pourers, Empire-builders and their blowhard backers. The city of Springfield, Illinois—a “mottled concrete moonscape of the land where Lincoln walked at midnight”—has been “urban-renewed into Gehenna.” Christian neoconservative apologists are “soft young men in threepiece suits who write their little pamphlets proving that whatever slaughter our government is currently engaged in is a ‘just war'”: they “should be laughed back to the seminaries they quit.” On school consolidation: “a profoundly anti-community movement conceived by progressives of the Big is Beautiful stripe that was given wing by the militarism of those allegedly halcyon 1950s, when the chimera of well-drilled little Ivan Sputnik was used to regiment the comparatively anarchic American educational system.” Kauffman’s special ire is saved for progressive bureaucrats like “the pestiferous Robert Moses,” whose name ought never to be mentioned “without a parenthetical fustigation.” Kauffman’s fustigation of Moses—the man who evicted half-a-million New Yorkers from their homes to build 627 miles of road in and around the city—extends far beyond the parenthetical. “Moses sat blissfully distant from the wrack and ruin of his acts. The bastard never even learned how to drive. Not that such ignorance has ever deterred New Yorkers from telling others how to drive.” Direct hits, every one, and there are many more on nearly every page of Look Homeward, America.

Against these and others from among the unholy axis-of-evil of lawyers, guns, and money, Kauffman and his “militia of love” assemble an armament of wit and poetry, Friday night high-school football games, sweet tea and dandelion wine, banjoes and rocking chairs, gardens and quilts, local culture and quirks, all held together by mothers and fathers and sons and daughters. No one is exempt from choosing sides, and Kauffman’s advice is clear: “Stay with your family. Your tribe. Your neighborhood. Your town.”

To be sure, Kauffman rattles the conservative cage in ways many will not appreciate. He is staunchly anti-war, verging on the pacifistic; he places little importance on markets (though a great deal of importance on freedom); his anarchic vision tends, at times, to gloss carelessly over intractable questions of order, hierarchy, and power. Still, Look Homeward, America is a welcome challenge to a conservatism often grown complacent and wonkish in its political ascendancy.

At his best, Kauffman reminds me of another American eccentric who rattled establishment cages and became a conservative luminary in the process: Whittaker Chambers. Like Kauffman, Chambers centered his entire political outlook in a love of the particular rather than in grand abstractions which he had learned to abhor and fear during his time as a Communist. Chambers describes his own love of home, and by extension his conservatism, in one luminous paragraph in terms wholly human:

Our farm is our home. It is our altar. To it each day we bring our faith, our love for one another as a family, our working hands, our prayers. In its soil and the care of its creatures, we bury each day a part of our lives in the form of labor. The yield of our daily dying, from which each night in part restores us, springs around us in the seasons of harvest, in the produce of animals, in incalculable content.

[T]he most ennobling work we do is seldom remunerated in greenbacks. Bearing and raising a child, cultivating a garden, just being there for a sibling or friend to lean on: this “work” is compensated in a currency far more valuable than Uncle Sam’s paper. This, in fact, is the work that should be honored on Labor Day. The work we do for “nothing.” (For everything, really.) The work that enriches us as human beings; that binds us to our families and our neighbors; that shrouds even the most commonplace of lives in glory. This is the work whose coin, whose only coin, is love.

The coin of love? Is he crazy? He probably is: all God’s children are. Romantic? Absolutely, the mark of a true American conservative. Hopeless? Certainly, nothing ever comes right in this world. But Kauffman’s reactionary radicals and front porch anarchists have something even more important than hope—they are worthy of the fight, they are worthy of their homes and of the best that America can be. And in the end, one day, they will merit their own special verse in the song that will lament the passing of the darling old republic.

Blond, Kauffman, and Beer in the Latest TAC