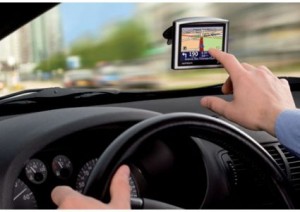 Blairsville, GA. Recently my wife and I took a trip to New York City. To alleviate the trials of navigating an unfamiliar city, my sister offered to let us use her GPS. We accepted her kindness, typed in the address, stuck the thing on the windshield, and set off. Before we even left the neighborhood, a kind but authoritative voice began giving orders. But the commands were not onerous and I readily turned left when told to do so. Soon we were on the highway, merging into the steady flow of traffic, and headed toward the Big Apple.

The voice was a woman’s. From the beginning, we found ourselves thinking and speaking of it as a her. “She said we need to get into the right lane and prepare to exit.” It was almost like having a wise and concerned aunt riding shotgun. She spoke with supreme confidence, and within a few short miles, I had put my faith in her, I mean it.

But something strange happened during a long stretch of highway where no turns were called for. I missed the voice. After 10 or 15 miles of silence, I found myself wanting some reassurance, merely a verbal pat on the head, just a “you’re doing fine, Mark.” I found myself wishing we’d brought a map so I could confirm that this little machine mounted with a suction cup was not leading us astray. When finally it was time to exit, her soothing instructions set my mind once more at ease. No longer did I pine for a map. She was in charge, and we were in her hands. When I missed a turn, my new friend patiently intoned “recalculating” (did I detect a note of frustration?) and reset our course.

My wife and I were both amazed at the accuracy of this new technology and the ease that it brought to our venture into the city. But I wonder. Is the ease a technology affords the only criterion by which it should be judged? To be sure, the GPS frees drivers from the trouble of figuring out how to reach their destinations. No more uncertain attempts to divine one’s location; no more squinting at the maps, no more failed attempts to fold the accordion and finally giving up and crumpling it into the glove compartment. Best of all, no more frustrated arguments and no more asking for directions.

It is not only drivers who now employ a GPS. Hikers and backpackers are encouraged to carry a GPS as they venture into the wilderness. Again, this no doubt adds a sense of security to the wilderness experience, but is something lost in the transaction? Is the wilderness, well, less wild, when rescuers can locate distressed hikers with all the precision of a guided missile? When a person enters the wild equipped only with a map, provisions, and wits, the sense of freedom is profound. But so, too, is the sense of adventure and even danger that necessarily accompanies any serious foray into wild places. Do we really want to make the wilderness safe?

I am, in retrospect, bothered by how quickly I fell into dependency. I am disturbed by how willing I was to submit to the supremely confident voice of this technological marvel. Ultimately, I wonder if the freedom afforded by this device came at a price. I wonder if this feeling of freedom is perhaps more accurately a sense of security that the GPS creates and not really freedom at all.

One might object to this line of thought and say that if risk and insecurity are good things and if I am suspicious about the effects of the GPS, why not dispense with maps as well? The difference, I think, is related to skill. Reading a map requires serious and intelligent engagement. Whether one is in a new city or in the wilds of Alaska, successfully reading a map takes attention, experience, and judgment. One can never abdicate the responsibility to make crucial decisions based on a complex series of observations and comparisons about the world. One can navigate well or badly. The risk of getting lost makes the entire enterprise laden with meaning. The GPS requires nothing except obedience. No skill. No judgment. One does not need to pay attention; instead, one need only do as instructed and all will be well.

The GPS is merely a recent example of our continued attempt to render the world secure by virtue of the technologies we embrace. Technology, of course, is not limited simply to mechanical devices. Bureaucracy is a modern technique by which governments can operate more effectively and thereby serve us more assiduously. The modern banking system is a technique by which money can be managed in a way that stabilizes the consequences of irrational behavior and unexpected events. Bureaucracy, banking, and, more broadly, the entire modern cult of the expert draws us in by the supremely confident tones of the practitioners. We are induced to trust them because the world of finance or government policy is so complex and sophisticated that the average person feels helpless to understand it much less confront it in any meaningful way. Besides, if they, whoever they are, can only get things on track, everything will be fine. Our uncertain world will be stabilized, and we can exercise our freedom in the context of that new and improved place.

But this leads us to a question: is meaningful and robust freedom compatible with a world rendered secure by our technical cleverness? Does a completely secure world have any space for meaningful freedom? In a world of absolute security, or the impression thereof, would we even miss the freedom that has been lost? As long as we can still choose from a variety of goods and services, we will surely think ourselves free. But when we are conditioned by habit to obey the gentle voice of the GPS, our imaginations are reduced to a state of expectancy rather than creativity. We listen for “her” voice and respond when she speaks. We accept the decisions of the financial “experts” because they know what is best. We obey political authority without questioning the justice of the demands. We may, in short, find ourselves increasingly obedient and secure but less free in any meaningful sense.

I don’t mean that we will be slaves or prisoners. My concern is that the way we encounter the world will be altered. When we focus our attention on the GPS and trust it to take us to our destination, we interact with the world in a way that is fundamentally different than when we are forced to rely on our own navigation skills. When we travel to a new city or enter the wilderness unarmed with a GPS, we take matters more seriously, for the uncertainties of the wilderness must be attended to and the sense of security afforded by the technology is replaced by skill, judgment, and humility. Perhaps the possibility of getting lost is a good thing.

Furthermore, isn’t it a false sense of security that the GPS provides? What would happen if the satellites went down or the batteries died? Does our dependence breed incompetence? When we no longer need to ask for directions, does our technology foster our solitude? If everyone depended on a GPS, would anyone know where to go or how to get there? Would we any longer attend to the details of the journey, the spatial and temporal relations that situate us meaningfully in a particular place?

Humans have always sought to make the world more secure. But when the devices and methods to that end serve as proxies for judgment and engagement, something has been lost. If a technology requires submission rather than skill, trust rather than effort, we might be justified in asking if the price of this security is the inclination to engage the world as free creatures. I wonder if the price is too high.

Your Computer (and everything connected to it) is Broken