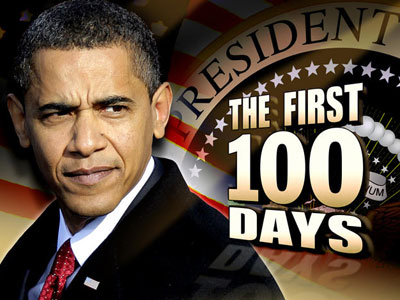 Erie, PA. Americans were reminded last month that since the time of the New Deal, it has become customary for presidents and other public officials to be judged by their performance during their first one-hundred days in office. It is time to reconsider the usefulness of the one-hundred days standard for judging public officials. The standard is outdated, inappropriate, and suggests that regardless of circumstances all presidents should be judged by the extent to which they measure up to FDR’s flurry of policy programs intended to combat the Great Depression.

The standard is based on the assumption that the more activist a president is, the better the nation fares. Moreover, it attempts to assess most policies before they have been implemented or had sufficient time to succeed or fail. Judging presidents by the first one-hundred days in office rushes judgment by forming it in the passion of the moment when critical distance is extremely difficult, if not impossible. While the first one-hundred days standard may be misguided and inappropriate, the use of a one-hundred years standard might indicate a movement toward a new realism in American politics that marks the end of big government and the romantic humanitarianism that is its animating force.

The first one-hundred days standard assumes things that are open to question. For example, it assumes that public policy is the appropriate response to virtually any economic, cultural, or political problem. Government can fix what is broken because, unlike local or state communities, it has the capacity and resources to address the problem at hand. In short, the scale of national and international political, social, and economic problems requires an institutional response of equal scale. It is often remarked that national problems can only be solved by national solutions or that global problems can only be solved by global solutions. The inclination of many Americans is to accept the assumption that “the economy,” “poverty,” “education,” “healthcare,” “the environment,” and so on are national or international problems beyond the capacity of local communities.

We suffer from what Wilhelm Röpke called “enmassment,” the creation of a uniform mass culture in which individuals are increasingly alienated from genuine and local communities that provide identity, purpose, obligation, love, happiness, and a sense of place or belonging. Because we are increasing alienated from these communities and increasingly psychologically attached to distant national and global identities, the importance of local communities ceases to be part of how we imagine politics. We find it difficult to imagine how the problems of political, social, and economic disorder can be addressed on a local scale. Wendell Berry’s novels and essays are a good starting point for reshaping political imagination in a way that can perceive local community as the foundation for a new pedigree of politics. The unintended consequences of national policies and the “progress” they engender are evident in the loss of friendship and belonging. Berry reminds his readers of the consequences mass culture has on what Burke calls one’s “little platoon.”

A second assumption of the first hundred days standard is that government action is better than inaction and that quick action is better than a slower more deliberate response to political, social, and economic ills. The rush to act is inconsistent with the tenor of constitutional government and consequently, it conditions representatives to behave less like republican statesmen and more like demagogues. The American constitutional system is not designed for quick momentary action. To the contrary, it is designed especially in the realm of law making to be slow and deliberative. Why? So that disparate voices and interests can be heard, a more sober reflective spirit will prevail over the passion of the moment, and sufficient attention will be given by lawmakers to reaching a harmonious compromise that incorporates aspects of multiple interests. The aim of American constitutionalism is, to use James Madison’s words, to allow “the cool and deliberate sense of the community” to prevail. The American political system is designed for individuals with a temperament that exhibits patience, compromise, and deliberation. Quick momentary inhibition was considered by the Framers to be the cause of passions that were contrary to reason and the enduring interests of the people and their nation. The Framers rejected “pure” (i.e., direct) democracy precisely because it gave free reign to the momentary majority will and allowed it to dominate minority interests.

The conduct of contemporary American politics is increasingly characterized by gnostic impatience. The world in general and American society in particular are poorly organized and in need of significant if not revolutionary change. Evil, imperfection, and injustice are not tolerated to any degree. Politics is not the art of the possible but the instrument of metastatic transformation, i.e., not only can particular political, social, and economic problems be effectively addressed by public policy, but they can be permanently eradicated. In the past one hundred years, Americans have been promised by their presidents a permanent end to war, poverty, fear, drug use, terrorism, and deep recessions. None of these promises have been kept because they are the products of metastatic faith.

From this perspective, it might be useful to use the one-hundred years standard rather than the one-hundred days standard to measure the performance of American presidents. Doing so might be a sobering experience that inspires a new realism in American politics that is less prone to gnostic impatience and more tolerant of imperfection, less apt to confuse heaven and earth and more apt to see enmassment as destructive to ordered liberty and constitutionalism.