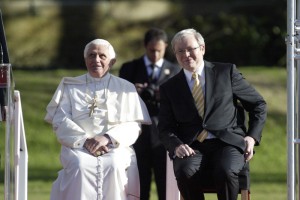 Australian Prime Minister Kevin Rudd is probably the most popular center-left leader in the world, with an approval rating hovering near 75 percent. Elected in 2007, Rudd is more popular among Australians today than President Obama is here, despite taking office prior to the current economic collapse. He also ran a very different kind of campaign, one that was sharply ideological compared to Obama’s message of pragmatic change. For faith-based defenders of the family and community values, this contrast is worth looking at more closely.

While Obama’s impressive electoral victory was driven in part by certain clear demographic trends away from Republican Party positions and appeal, it is hard to imagine a worse set of conditions for an incumbent party seeking a third consecutive White House term, or a more ready-made opportunity for an appealing opposition leader. For that reason and others, I don’t compute this mostly pragmatic victory as inaugurating a new era of center-left dominance in the United States, as some are suggesting. Too much historical complexity and uncertainty and too many independent swing-voters make any such lasting power unlikely in the future. For example, the progressive voting and public opinion trends we see today were already clear, on a long-term path, by the late 1990s, but two singular events, Bush v. Gore and the 9/11 terrorist attacks, derailed the progressive trend to the point where leading experts instead began predicting the consolidation of an “enduring conservative majority.” It is laughably unhistorical to extrapolate future results from current political numbers as if there won’t be any scandals or crises that disrupt already fragile party loyalties and independent-voter trends. The potentially inflationary repercussions of President Obama’s deficit-spending, coupled with, say, scandalous revelations about the financial bailout, could knock Obama out of office in 2012, particularly if he faces a certain kind of conservative opponent. My best guess in that regard is Mike Huckabee, which leads me back to Kevin Rudd.

Rudd may be the first politician since Franklin Roosevelt to win national power for a center-left party by attacking the conservative establishment from the right, in the name of family security and family values. Uncharacteristically forthcoming about his religious convictions (uncharacteristic for Australia, that is), Rudd successfully painted the John Howard-led Liberal-National coalition government as the anti-family party, the party of commercial values and business predation against the things we hold most dear.

Raised in Queensland and fatherless from a young age, Rudd was shaped by the rural Catholic faith of his mother. He is sometimes described as a “Christian social democrat.” In a widely discussed essay on Dietrich Bonhoeffer, published in 2006, he defined the theology and scriptural basis of his Christian commitment and contrasted this with the hypocritical “culture war” waged by John Howard. In another widely discussed pre-campaign essay, drawing heavily on David McKnight’s book Beyond Right and Left, Rudd mounted a savage attack on the neoliberal model Howard borrowed from Margaret Thatcher and Ronald Reagan. Singling out the influence of Friedrich von Hayek, which was particularly strong in Australia, Rudd argued that a fundamental conflict between capitalism and family life has been unleashed in the neoliberal era. Two different value systems are at war, he argued, the commercial value system and the family and community value system–the  former gaining unprecedented power while the latter loses even basic protections. In Hayek’s view, Rudd explained to a national magazine audience, family values are nearly vestigial to the kind of development promoted by efficient markets. Efforts to protect vestigial social structures like the family must be considered sentimental errors of an atavistic worldview. As Rudd explained:

[Hayek] explicitly repudiated solidarity and altruism in favour of private property and contract: “An order in which everyone treated his neighbour as himself would be one where comparatively few could be fruitful and multiply.”

McKnight notes that the only domains in which Hayek allows for the “primitive” feelings of solidarity and altruism are the family and voluntary associations. In Hayek’s words, “If we were always to apply rules of the extended order [of capitalism and the market] to our more intimate groupings we would crush them.” (The emphasis is Hayek’s own.) In his analysis, McKnight rightly concentrates on the central vulnerability in this philosophy: the problem that arises from the commodification of all things, that is, “the transformation of obligations based on love and altruism into those of commodity-based economic values (i.e. money).”

He describes the central dilemma: Hayek recognised this paradoxical inconstancy, and proposed that we must simply learn to “live simultaneously within different kinds of orders within different rules – those of the markets and those of the family. We must be ruthlessly self-interested in the market and sweetly caring in the family; greedy at work and selfless at home…”

Herein lies the core challenge for conservatives, as the impact of neo-liberalism cannot be effectively quarantined from its effect on the family—and beyond the family to other sub-economic, reciprocal relationships within communities, and other social and spiritual associations. Once again, McKnight distils it best:

Rather than the two worlds existing simultaneously, one world is slowly crushing the other. Hayek’s intellectual paradigm has turbo-charged the privatised, marketised economy, which is relentlessly encroaching on the life-world of family, friends and community. The invisible hand is clutching at the invisible heart and slowly choking it. Thus the story of New Capitalism’s effect on the family is just part of a wider story of what is happening to all non-market relations between people. Bonds of respect, civility and trust between people are being weakened, and relations based on competition, self-interest and suspicion are growing.

Rudd’s reframing of Labor politics around a protective family-centered vision of the common good, a new “social economy,” may be reinforced in the comingweeks by Papal decree. As I noted in a comment added to my last post, Pope Benedict XVI is about to release his major economic encyclical, Caritas in veritate, and rumors about its content abound. The most significant background rumblings include E. W. Böckenförde’s recent publication, in Germany and Italy, of an explosive article on capitalism. The eminent German jurist, an important influence on Benedict XVI, argues that the market foundations of society must be replaced with a production and distribution model regulated by natural law principles of the common good:

So what is capitalism suffering from? It is not suffering only from its excesses and from the greed and egoism of the men operating in it. It suffers from its point of departure, from its functional principle and the power that creates the system. For this reason, it is impossible to heal this illness with marginal remedies; it can be healed only by changing the point of departure.

The extensive individualism in matters of property, which takes as its point of departure and structuring principle the potentially unlimited profit of the individual, considered a natural right not subject to any content guidelines, must be replaced with a normative framework and a strategy of action based on the principle according to which the goods of the earth, meaning nature and the environment, the products of the soil, water and raw materials do not belong to those who are the first to take possession of them and exploit them, but are destined for all men, for the satisfaction of their vital necessities and for the attainment of well-being.

Böckenförde’s explicitly defines this new social economy in light of Thomistic Catholic tradition, obviously referencing the principle of the universal destination of goods. Unfortunately, he ignores the need to properly define the subsidiary role of the state in such a model of distributional change, something likely to be a major focus of Caritas in veritate. As Bishop Crepaldi (secretary of the Pontifical Council for Justice and Peace) described it in a recent radio interview, the encyclical “can be an instrument to help politics recover its function: that of designing the architectural structures of our social life in the way of justice, freedom, truth and solidarity.” Under the principle of subsidiarity, of course, the notion of “designing” social structures can only refer to the need for certain kinds of protection and support for the prior natural order of families and communities, the formative structures of human belonging and well-being. To be a “Christian” social democrat one must embrace a structurally limited, but fiscally supportive, role for the state, providing the help families need to protect themselves and their communities from the inhuman market powers that, increasingly, control the world.

One cornerstone of a subsidiary architecture of social support is paid parental leave for care of newborns. Until recently, the United States and Australia were the only two OECD countries without any policy of paid parental leave. Kevin Rudd campaigned on the issue, and paid parental leave was recently passed in Australia’s federal budget. The policy gives an eligible working parent payments equal to the federal minimum wage, approximately $543 weekly, for a maximum of eighteen weeks. All primary caregivers in Australia already receive a “baby bonus” of approximately $5,000 per child plus other benefits.

A small sign of life for such support in the United States has also appeared. Just last week, the House of Representatives passed a very modest paid parental leave bill for federal employees, the country’s largest single workforce. Should the bill become law, we might move up one or two slots from our dismal global ranking alongside Lesotho, Swaziland, and a few other countries with no paid maternity leave of any kind (in a recent study of 173 countries conducted by McGill University researchers). Federal employee paid leave could be expanded to the private sector, undoubtedly a huge fight, but one that right and left should wage as one family movement, bringing working and non-working mothers together under a single child-centered benefit scheme. Call it welfare, an expansion of the “nanny state”–choose your Tocquevillian epithet–but in my life, certainly, and millions of others’, the lack of such support has made it harder, distressingly and sometimes tragically harder, to be the mothers and fathers, the providers and nurturers, God made us to be.