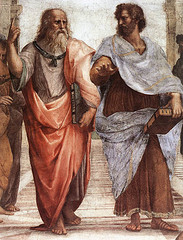 Henry County, Ky.    Those of us foolish enough to call ourselves “conservative” are forced to admit that culturally and politically at least we live amidst less and less worth conserving.  We can and should continue to mind our own business, and tackle daily life as cheerfully as possible, but some days one wants to take up the fight for the reformation of this bloated and addled culture of ours.  Where to find a cudgel?  With a culture on the skids, the regressively-minded must acknowledge that it is not enough to look back a decade or two, or a lifetime or two, for what we would restore and retain.  We have to look back a good deal further than that.

While Thomas Fleming is not the first or the only to make this argument, he has long been making it, and it is one that comes naturally to a Greek Ph.D., a traditionalist Catholic, and the longtime editor of the paleoconservative magazine Chronicles.  The central argument of his 2004 book, The Morality of Everyday Life: Rediscovering an Ancient Alternative to the Liberal Tradition, is that the traditions of the ancient Greeks, Jews, Romans, and Medieval Christians (as well as Eastern cultures) can provide us with tools for sorting through the moral dilemmas of daily life much better than what Enlightenment ethicists and their modern children offer us.  I take up the book here because it is likely you have not read it.

Universality, rationality, individualism, objectivity, and abstract idealism are the hallmarks of philosophy since the 18th century, and these ideas have trickled down to the rest of us as the tele-popularlized ethos of our “meritocracy,” the college-educated ideal of self-fulfillment as the highest good, the United Nations’ stated belief in blind international justice.  It is no coincidence, Dr. Fleming says, that the emergence of this kind of individualistic and rationalistic idealism came about in opposition to traditional Christianity.  For several centuries now in the West we have put a great deal of effort into replacing the God that is Great with a very little god, who is made not in His image but our own.

And whatever this has done for the personal wealth of the United States’ uppermost crust, it has been an ethical, social and even logical loss for all of us.  So Dr. Fleming goes back, and unchops the logic that lies behind such prevalent impossibilities as universal brotherhood, global villages, international free trade, world citizenship, and the Rights of Man.  These invasive cliches are the hardy perennial weeds—the ground ivy and thistles—of the ethical garden.

The Classical Liberalism that is the common source for what we now think of as both Left and Right is not just deracinating but demands a superhuman, he says.  And when asked to become godlike, people often become subhuman instead. “As the liberal tradition has unfolded,” Dr. Fleming writes, “it has made increasingly impossible demands upon men and women who, confronted with the choice between moral heroism and amorality, have no choice but to become amoral.”  Or simply to do nothing.  If I accept the idea that every person in the world has a right to clean water, how am I going to provide it?  How will I feed India?

In opposition Dr. Fleming cites Greek philosophers, Roman law, church fathers and Jesus Himself to support the argument for personal ties and particularity—what most of us would call common sense and common humanity.  None of us is capable of being a philosopher king, bestowing a godlike judgment from on high, free of prejudice and any shred of self-interest.  For Christians, thank goodness, even our God is not godlike in that way–it is His fatherly prejudice in our favor that gives us any hope.  What Dr. Fleming is talking about are circles of interlocking relationships, duties and obligations to people we know that enmesh us like a coat of mail.  Also like a coat of mail, they can be very heavy.

Hence the answers he offers are not easy, since “the wretched depravity of particular duties” (as Thomas Jefferson so vividly called them) to our aging parents, our growing children, our deeply depressed best friend or our cross-town neighbor whose house just burned can make great demands on our energy and purse.  This is a book of modern casuistry, and throughout it Dr. Fleming works through the gray areas of conflicting loyalties and demands to make a best (but not easiest) case.

Certainly it is much easier to practice charity by writing a check to an NGO in Africa than to feed daily at your own table the mentally ill son of an old friend (as certain neighbors here do).  But the money spent at home is much more likely to be spent usefully, and my neighbors are giving their friend’s son much more than food.  The result of modern ethics, and of any do-gooding done at a distance, is twofold:  first, any bureaucracy tends to absorb our effort and our money into itself, and second, palliating our consciences long-distance tends to weaken the ties to home, family, place and polis, without replacing those ties with anything of any strength.  As we Americans move on physically and emotionally, and leave behind us the people and places we are most beholden to, we can’t easily replace their purpose.  No wonder we turn to the opiates of shopping and television (or opiates).  Nature abhors a vacuum.

Years ago I read an interview with a Washington Post editor who felt than as an overseer of the editorial page he had to maintain strict objectivity.  To him that meant that on certain divisive issues, such as abortion, he could have no opinion.  It was not that he suppressed his opinion.  He would not let himself reach a personal decision on the issue, because only by having no opinion, he believed, could he fairly edit the opinions of others.  It was a remarkable admission, but this is where the logic of objectivity will take a man, who holds onto it as an ideal in the teeth of all real logic.  To such arguments for moral paralysis and the refusal to think Tom Fleming offers in this book (as he does other places) highly particular and welcome alternatives—news so old it is new again.

The Financial Crisis and the Scientific Mindset