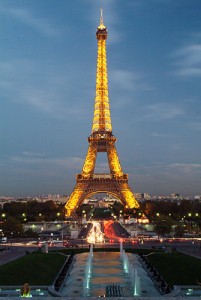 Irving, Texas. Is the devil from Paris? Many people seem to think so. And if not the devil himself, then at least a particular demon, one whose name is not “Legion” but “Postmodernism.” Postmodernism is a philosophical movement that originates largely with a legion of Frenchmen, three in particular, Jacques Derrida, Jean-François Lyotard, and Michel Foucault. This “unholy trinity” (as Jamie Smith calls them) has raised a challenge to the received wisdom of Enlightenment thought that many find as perplexing as it is (at times) incomprehensible. By the “Enlightenment” I mean basically the challenge of 17th and 18th century philosophy to the authority of traditional faith and belief, in general, and to the Catholic Church in particular. This challenge consisted of asserting the autonomy of the individual, and a claim of a pure “objectivity” which results in a science that has a unique access to universal truth and a rationalism to which all cults, creeds, and cultures must submit themselves if they wish to have any validity.

However, as much as persons of faith might appreciate a challenge to such rationalism, they often find that postmodernism has a basic problem. Namely, although it purports to reject the Enlightenment’s notions of truth, it regards these notions as the only possible notions of truth. Hence, postmodernism secretly accepts back what it rejects, and ends up rejecting truth itself; it therefore ends in nihilism. Indeed, in practice, postmodernism often ends up as hypermodernism (see Battling the Swooshtika), the idea that we have no real identity save what we create for ourselves, largely (in a capitalist society) through the products that we buy or the politics that we practice, products and politics that have no real meaning in themselves, save the meanings we can be persuaded to give them. This results in the primacy of marketing and ideology.

Nevertheless, a critique of modernism should be welcomed by Christians, or at least by those Christians whose Christianity has not been completely tainted by rationalism. And we find that many Christians have indeed appropriated the postmodernist critique; this forms the heart of the Radical Orthodoxy movement, for example, which would return theology to its pre-Enlightenment (and even pre-14th century) roots. And Pope Benedict XVI appropriated much of postmodernist thought in his recent encyclical, Spe Salvi (see The Postmodernist Pope.) From the other side, postmodernist critics are discovering the value of Christianity in their analysis. For example, Slavoj Žižek has made heavy use of Christianity in general and G. K. Chesterton in particular (see G. K. Chesterton, Postmodernist.)

One problem, however, is that the postmodernists often use a vocabulary that is inaccessible to general reader. Indeed, it seems to some that the postmoderns get entirely too much credit for translating Enlightenment drivel into incomprehensible French. Hence postmodernist thought has remained beyond the reach of most people. This problem is addressed by James K. A. Smith in Who’s Afraid of Postmodernism?: Taking Derrida, Lyotard, and Foucault to Church (The Church and Postmodern Culture). In this brief book (156 pages), Smith manages to take the most problematic expressions of postmodernism and not only to explain them in clear and accessible language, but to show their relevance to traditional Christianity. Jamie Smith concentrates on three statements of postmodernism: “There is nothing outside the text” (Derrida); “An incredulity towards metanarratives” (Lyotard), and; “Power is knowledge” (Foucault). Smith undertakes the formidable task of making these statements understandable in plain English, and showing their relevance to Christianity. Concerning the Derrida’s “deconstructionism,” Smith concludes that it helps us recover two key fundamentals of the faith: the centrality of Scripture for mediating our understanding of the world and the role of the community in the interpretation of Scripture. As for Lyotard’s “metanarratives,” these help us recover the understanding of faith as a narrative, rather than a collection of propositions, and the confessional nature of our narrative. In regard to Foucault’s Nietzschean claim that “power is knowledge,” Smith counters that it should “push us to realize what MTV learned long ago: (a) the cultural power of formation and discipline, and hence (b) the necessity of the church to enact counterformation and counterdisciplines. In other words, we need to think about discipline as a creational that needs proper direction.”

Prof. Smith notes that, “One of the reasons postmodernism has been the boyeyman for the Christian church is that we have become so thoroughly modern. But while postmodernism may be the enemy of our modernity, it can be the ally of our ancient heritage.” This is an important insight; it may well be that the best way to be “postmodern” is to be “pre-modern.” While the postmodern is often forced into nihilism by an inadequate notion of truth, the Christian has older models and older means, and so can appropriate the postmodern critique to the advantage of Christ and His Church.

My sole critique of this book comes in Smith’s application of postmodernism to liturgy, an application that strikes me as excessively modern rather than pre-modern; it seems to me to be mere “muti-culturalism.” However, this is a nitpick in an otherwise excellent treatment; liturgy is hard, especially for the liturgists. If you can read but one book on Postmodernism, this is the book to read.