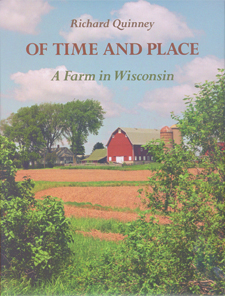 JEFFERSON COUNTY, KANSAS.  My review of Richard Quinney’s Of Time and Place, originally published in the University Bookman:

The American experience has always existed in tension with, if not outright hostility towards, the strictures of time and place. By the very nature of its settlement and political birth, America was conceived as a “new world.” A place of renewed opportunity, second chances, and a fresh start. Alexis de Tocqueville went so far as to describe America in Biblical terms as a Mount Ararat of sorts; a pristine continent newly risen from the floodwaters ready to be claimed by Europe’s castaways. Stephen Tonsor has noted that in America, “the notion of a ‘fresh start’ takes on the proportions of a national purpose.” Going even further, Henry James once suggested that America could not even qualify as a state in the European sense of the word as it has no defining institutional presence:

[N]o aristocracy, no church, no clergy, no army, no diplomatic service, no country gentlemen, no palaces, no castles, nor manors, nor old countryhouses, nor parsonages, nor thatched cottages, nor ivied ruins; no cathedral, nor abbeys, nor little Norman churches; . . . no literature, no novels, no museums, no pictures, no political society.

To the extent America has developed an institutional culture, it has done so in keeping with its founding, as a wholly voluntaristic venture premised less on external social bonds than on rational individual choice.

Michael Oakeshott wrote that the man of pure rational choice must have a “deep distrust of time” stemming from “an impatient hunger for eternity.” Likewise, his mind has no home, “no atmosphere, no changes of season and temperature.” According to the dominant American mythos of the fresh start, Oakeshott’s rationalist is the ideal American: a man unbound by time or place, restrained only by the scope of his own imagination and will. “He strives to live each day as if it were his first, and he believes that to form a habit is to fail.”

These ideals of new beginnings and a fresh start have imprinted themselves forcefully on the American soul, giving us everything from the frontier spirit and entrepreneurial innovation to the rugged individual and rags-to-riches fairytales. Americans still view themselves as liberated from Old World limitations: the dead weight of ancient blood-and-soil loyalties; the stultifying expectations of parochial locales; and the suffocating blanket of the-way-it’s-always-been.

Freed from these bonds, Americans have experienced, on the one hand, stunning material progress unleashed by wave after wave of creative dynamism and, on the other hand, the tragic alienation of loosing their identity as part of a particular “people” within time and place. Yet over the past half-century, with the increasing exhaustion of Progress as an ideal, there has been a renewed interest in discerning the limits necessary to a functional identity. As such, traditionalists (or at least those hungry for an identity they believe a tradition might supply) have engaged in a variety of heritage recovery projects in order to preserve or perhaps discover a usable past and an alternative American myth from which, to paraphrase Eliot, fragments might be shored against our ruin.

The genealogical craze in America might be considered one symptom of this desire, and on a deeper level, the emergence of the genealogical memoir as a kind of populist literary genre exemplifies the felt need for recovering a distinctly personal heritage. With Of Time and Place, Richard Quinney’s scrapbook-like account of his ancestry and their farm in Wisconsin, Quinney takes this genre to new levels of introspection.

“This place, to which I am native, I want you to know about.” With these words Quinney begins his slender volume, and for the next eighty pages of graciously subdued prose set against everyday photographs of his family and farm, Quinney relentlessly pursues this theme. In many respects, the story itself is not very interesting. There are births and marriages, small successes and small failures, family scandals and changing machinery—and photos of nearly all of these things. Through all of this, the character Quinney brings most forcefully to life is the place itself. We see the various ways the land was lived on and made to produce, the tools and craft of preserving and using the fruit of the land, the love-hate relationship Quinney himself has with the farm.

Quinney is most insightful in his self-awareness of the disorienting tension between being part of an American family’s fresh start and his settled life as part of multi-generational family farm.

Being a descendent of emigrants naturally sets the pace for a life. No doubt all emigrants, the generation that left the old country, experienced the pains of entering a new land. They lived their lives never again feeling at home any place in the world. For those attempting a return, even for a visit, a break had occurred that could not be healed. And in the new land, few emigrants ever made a home that they knew for certain would be theirs. Once you leave home, your native land, no matter how tenuous your hold has been, you can never feel at home anywhere you live.

Quinney characterizes his family’s life as forged “on the borderland.” The borderland experience haunts Quinney and is the abiding specter of his memoir which, as he notes, is his “way of keeping the ancestors with us, as if alive.” At times during his quest Quinney feels he is “lost in other times and places.” In his real life, he struggles between his desire to “leave this God-forsaken place [the farm]” and his inability, no matter how far he runs, to do so.

Finally, crucially, Quinney recounts his efforts in retirement to preserve the farm. Most tellingly, there are no photographs of future generations of Quinney farmers. No one younger than Quinney appears at all. In fact, all the evidence suggests that Quinney is the last of the line. The farm will not be farmed again, at least not by a Quinney. In place of that living thread, Quinney arrives at the photographic metaphor of a still life, the metaphor at the heart of Of Time and Place. “My self-imposed project is to photograph the artifacts, to make a record of the things that remain of the life that once was here. . . . These old and inanimate things now have an afterlife as they rest among the ruins.” Quinney peppers the last pages of his memoir with these still lifes—photographs of old artifacts, no longer used, piled against walls, in tool sheds, on shelves. The impression is one of an uncovered Egyptian tomb, all worldly possessions waiting patiently to be used again, in the afterlife. Quinney confirms the impression: “I am haunted by the mysteries of time and place. Fortunate I am to have my camera to see into the afterlife of things.”

Quinney’s narrative is pungent with the invitation to trespass. It is profoundly unsettling, as if Quinney has compensated for a failure of issue with a public embalming. The reader begins to sense something unseemly about his presence. We know we should not be here. But Quinney beckons us in, tempting us to unearth the dead, a desire both vaguely grotesque yet also strangely compelling for an America cut adrift. In this, Of Time and Place teaches its most important lesson unwittingly—that America is all too ready to settle for a “still life” of its past; unearthed, framed, and stuck on the wall (or in the scrapbook), awaiting the afterlife. In doing so we trespass against the past, ending up haunted, as Quinney is, forever hearing sounds that come “from another land and another time.” In the end, most will succumb to the kitschy traditionalism of suburbs with streets named Poplar Lane and “distressed” furniture purchased as talismans to ward off the ghosts.

The need for an alternative American myth—one that is situated in a usable past of a particular time and place—is real and pressing. But housing that past in a museum is a false remedy, partaking of the same derailments of therapeutic management that grip the man with a pathological need for endless fresh starts. The human need for belonging is fundamentally outside our control; it is something achieved only in submission. The most basic lesson may be that a usable past requires a usable present. When I was young, our family frequented the cemetery in which my ancestors were buried. We picnicked there and the children played hide-andseek among the gravestones. It is an apt and pregnant image. A living heritage picnics on the graves of its ancestors. That is no trespass, but is instead an act of loving continuity with the past. And the successful inhabitation of a place requires transmitting the intimacy of that fidelity, not in “still life” to strangers, but across generations within the ties that bind. Those ties that bind—buttressed by a mutual effort for survival under conditions of hardship and scarcity—form the only existential context within which the ghosts rest easy.